Finally.
I had been searching for a set (or pair.. or single.. or piece..) of SSR aero covers for quite some time.
So few come up for sale that it is hard to even gauge an idea of price; but after wanting some for so long, that was pretty much irrelevant. Next ones I'd see, I'd go for.

A couple weeks back two separate pairs of the covers went through Yahoo - a high offset white (with red text) pair, and these.. a low offset silver (with black text) 'pair'. 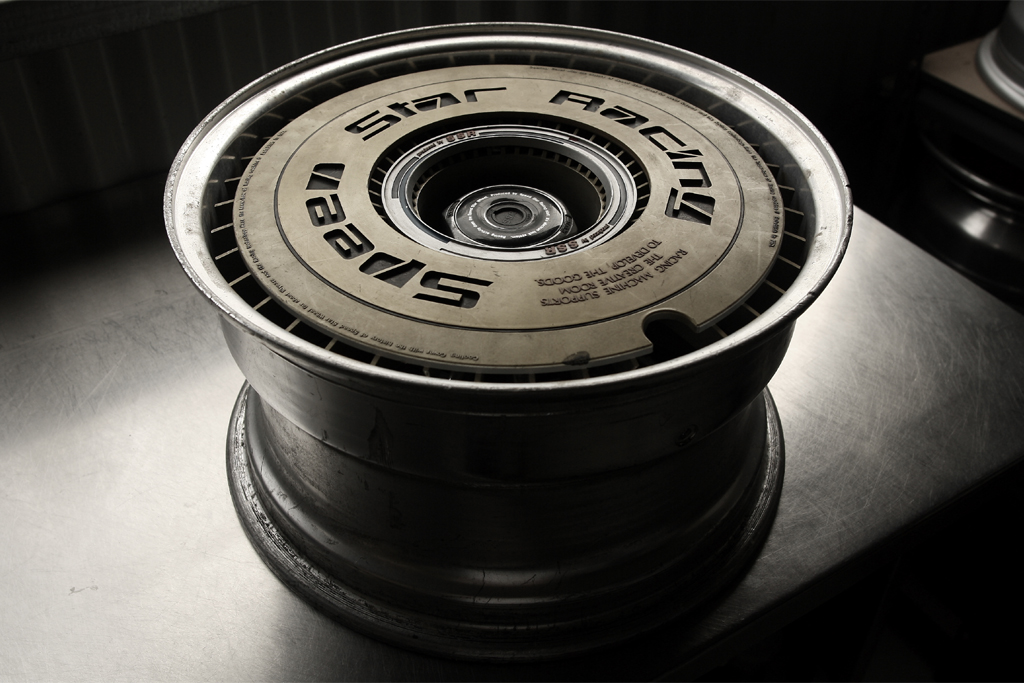 Beggars definitely cannot be choosers here; so a tired two-and-a-half-piece 'set' is as close as I may possibly ever get..

So here they are - the 15", low-offset, Silver-with-black-text covers - in all their faded, chipped, and discoloured glory: 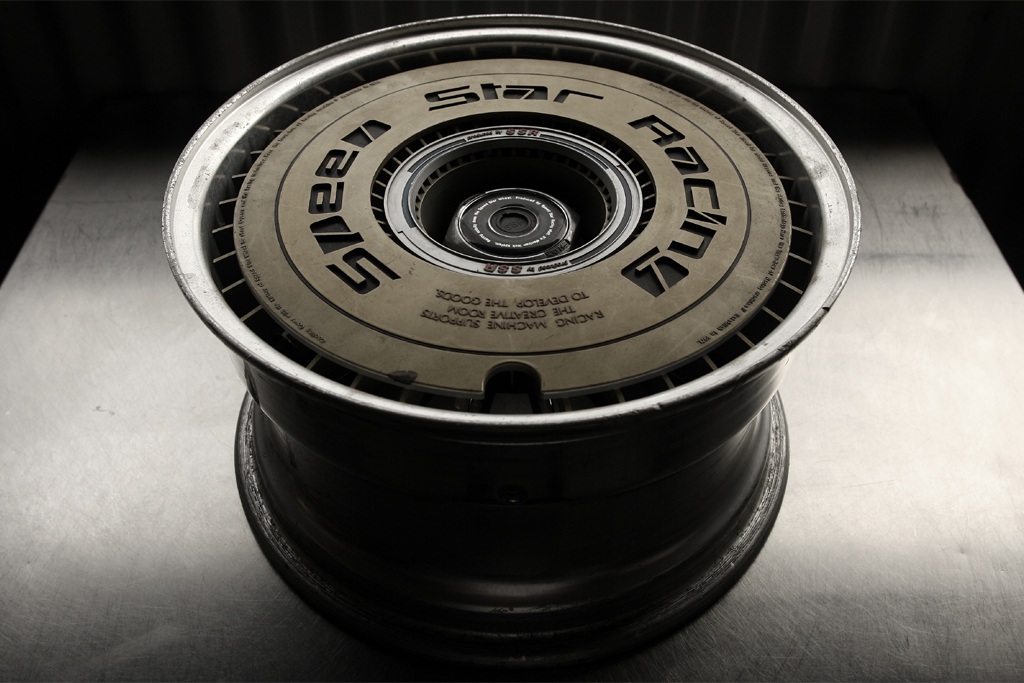 Just to back up up a little for anyone who has stumbled across this page randomly in google; what the hell is it I'm talking about, and.. why...?

Well on the table in the above picture is a wheel.. and on the front of the wheel what is essentially an unnecessarily elaborate hubcap. Its the flat, saucer-looking piece with 'SPEED STAR RACING' written on it in that fantastically 80's font.

This is a bit of a nod towards the aero covers.. or brake fans.. on the wheels of racing cars from that era, and were there to simply draw air past the brakes. These covers just may well work the same way too.. but falls well into the realm of adjustable spoilers and canards on a street car.. (I'm the last to complain there though...!) 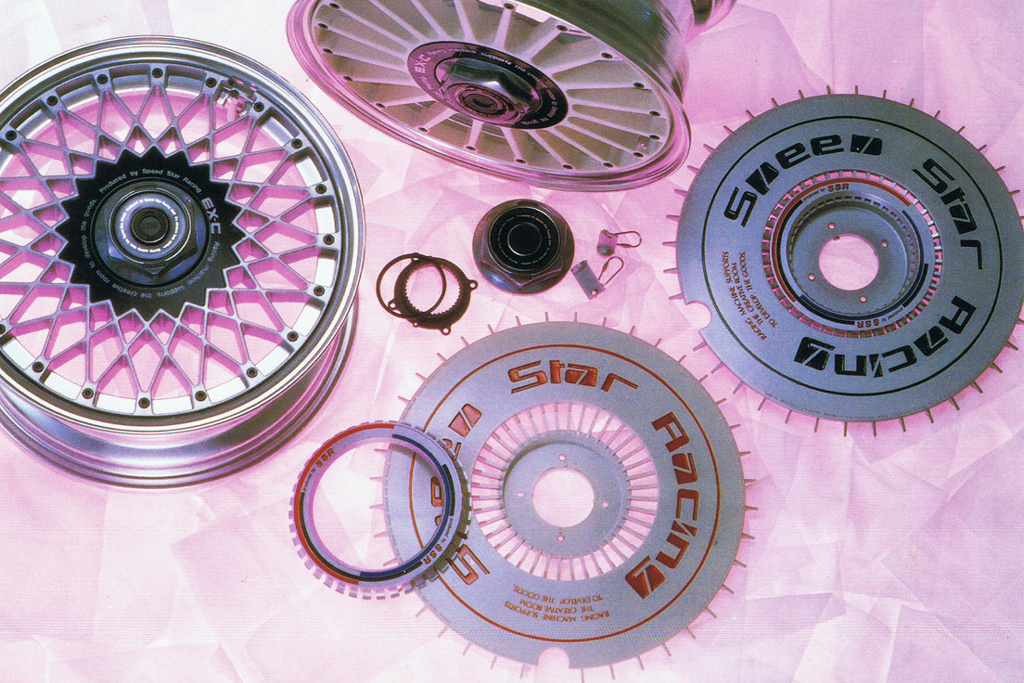 The cover is made to suit the SSR EX-C Fin and Mesh; but would also obviously fit the Takechi Project / RacingHart Spinner Fin and Mesh (which use the same faces), as well as any other SSR wheel with a screw on collar and enough clearance.

As mentioned already; the ones I have here are a low offset version, and made to suit a 15" wheel. There are at least two other depth versions available; to likely suit the very common 6.5" ~+20 size, and the 6" ~+40 'FF' style - like in the picture above.


Unimaginatively, the fourth colourway is Silver with Black letters - like the ones I have here. Or moreseo like the ones here originally were - which has now discoloured to a hilarious shade of gold... 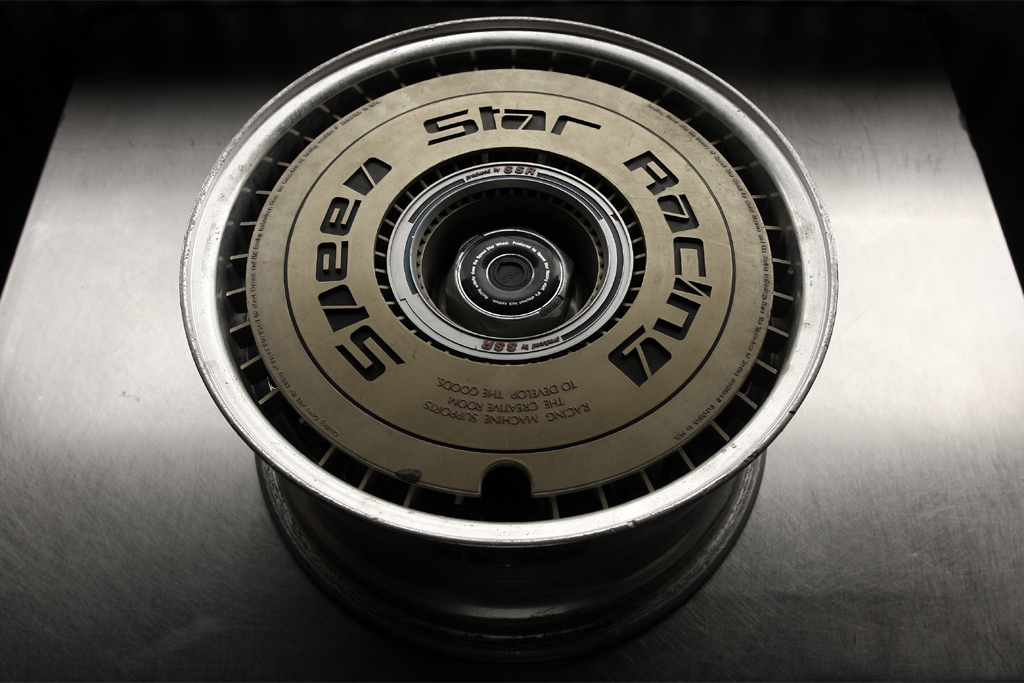 ..Which leads onto the explanation as to why these photos look a little.. dry?

After setting up the tired old aero cover on a deliberately matching 8" Fin (I've mentioned before how cool tired wheelscan look..).. well the filthy 'gold' the silver paint had become basically made my eyes bleed.

SO down the saturation went, for some almost-black-and-white-but-not-quite subtlety!

Moving onto a little more detail... 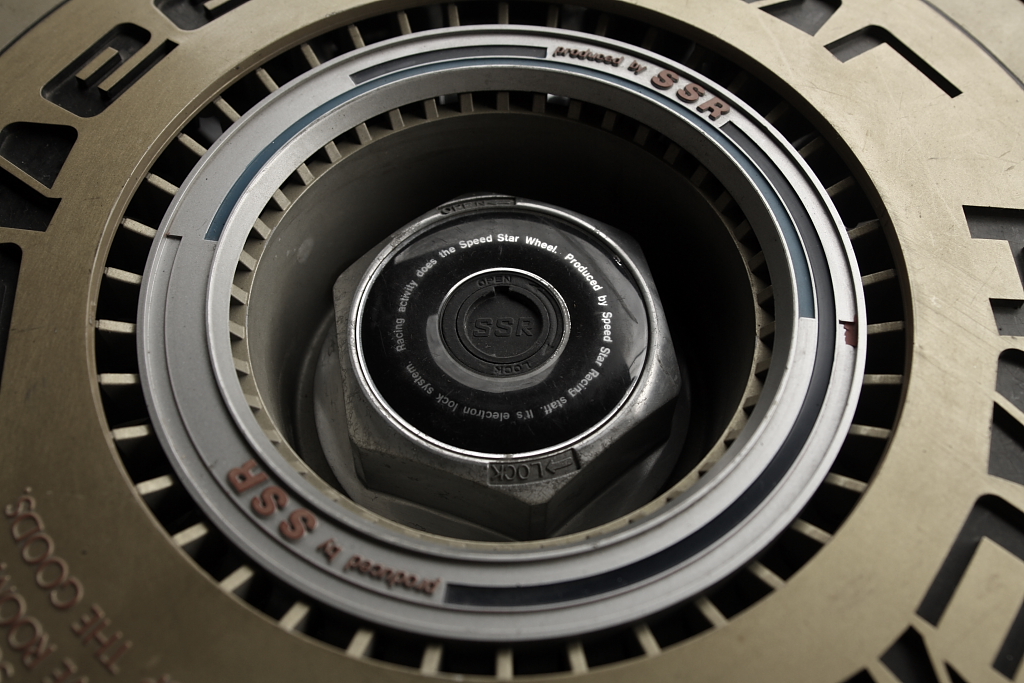 Remembering this us a 8" +/-0 wheel, really demonstrates how deep the cover is. The tall EX-C cap is completely sunken into the cover.. 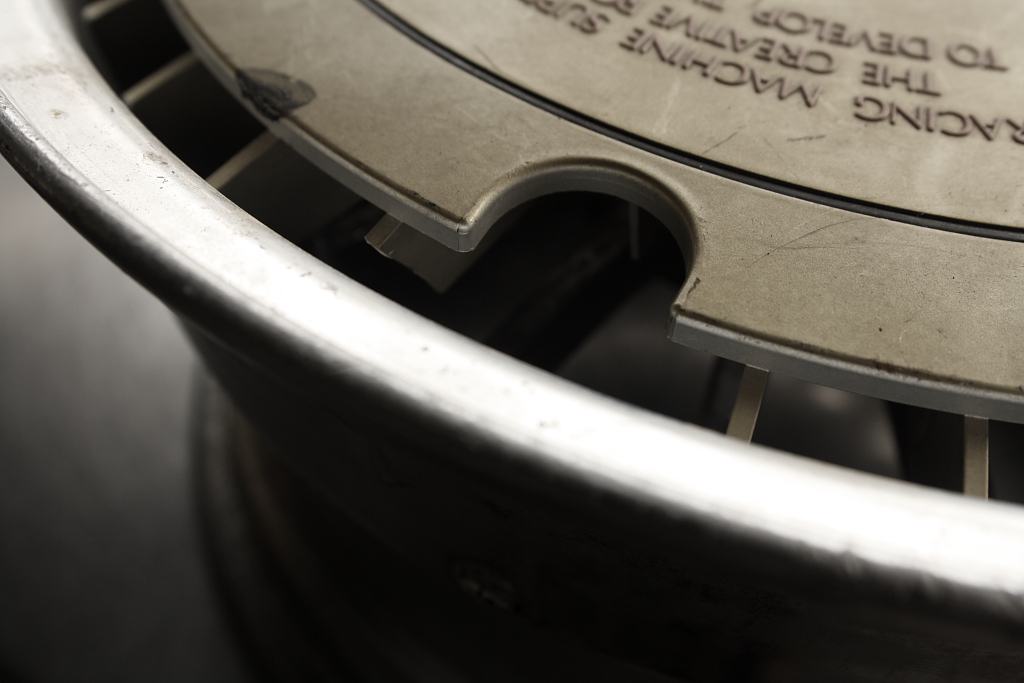 Valve cutout, still a couple inches away from the actual valve.
Broken fin on the aero cover is a nice touch.. 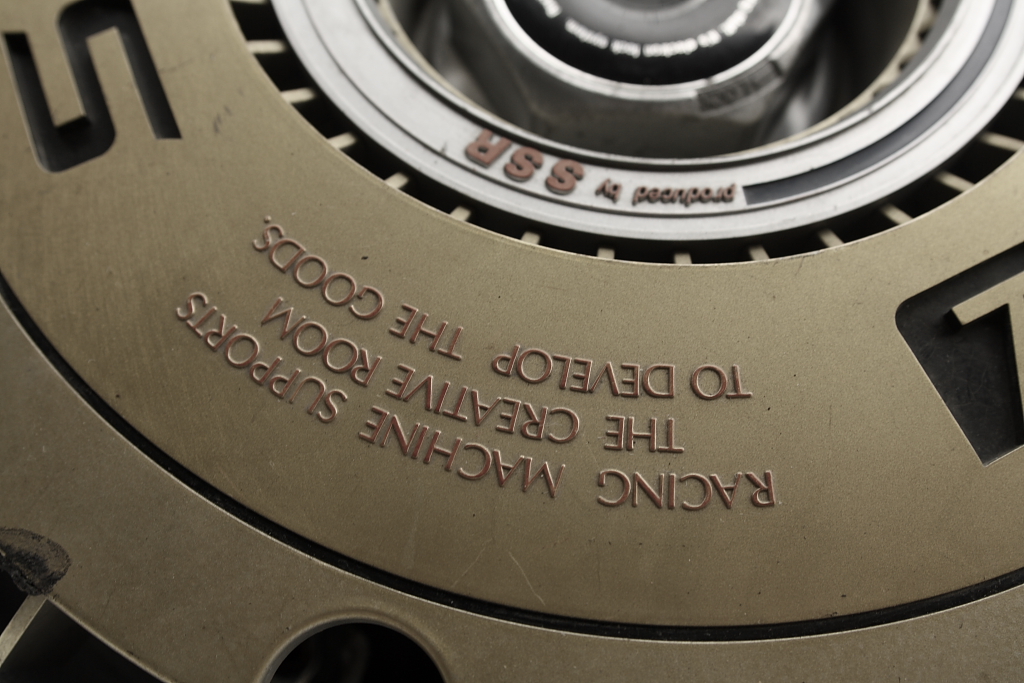 RACING MACHINE SUPPORTS THE CREATIVE ROOM TO DEVELOP THE GOODS.

Yep - by creating parts for racing, we have the ability to develop similar parts for road cars. 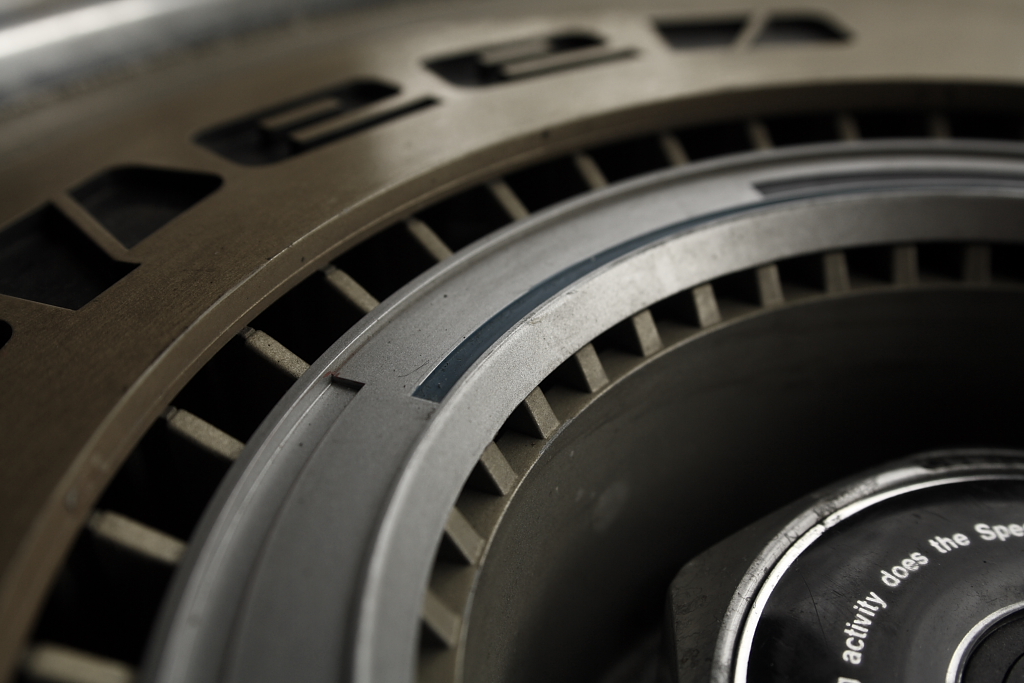 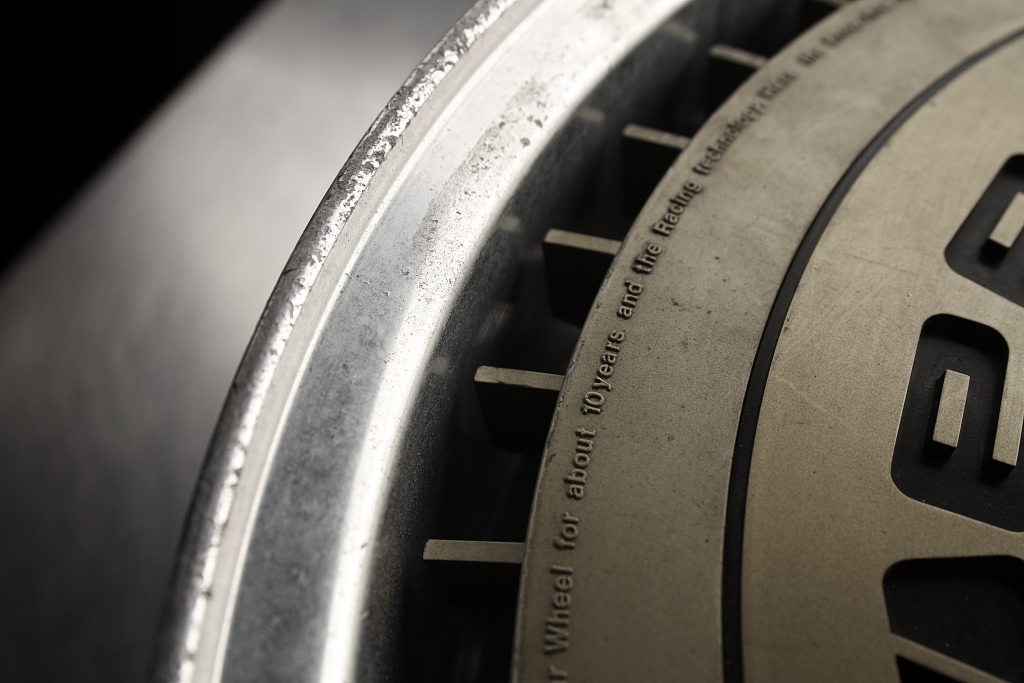 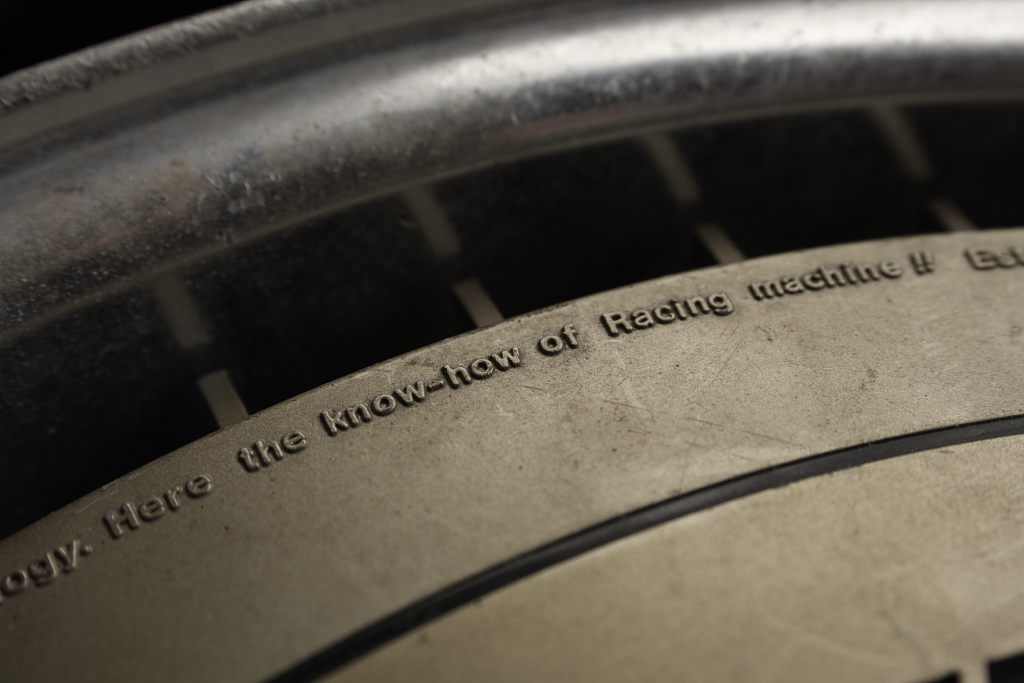 Here the know-how of Racing machine !! 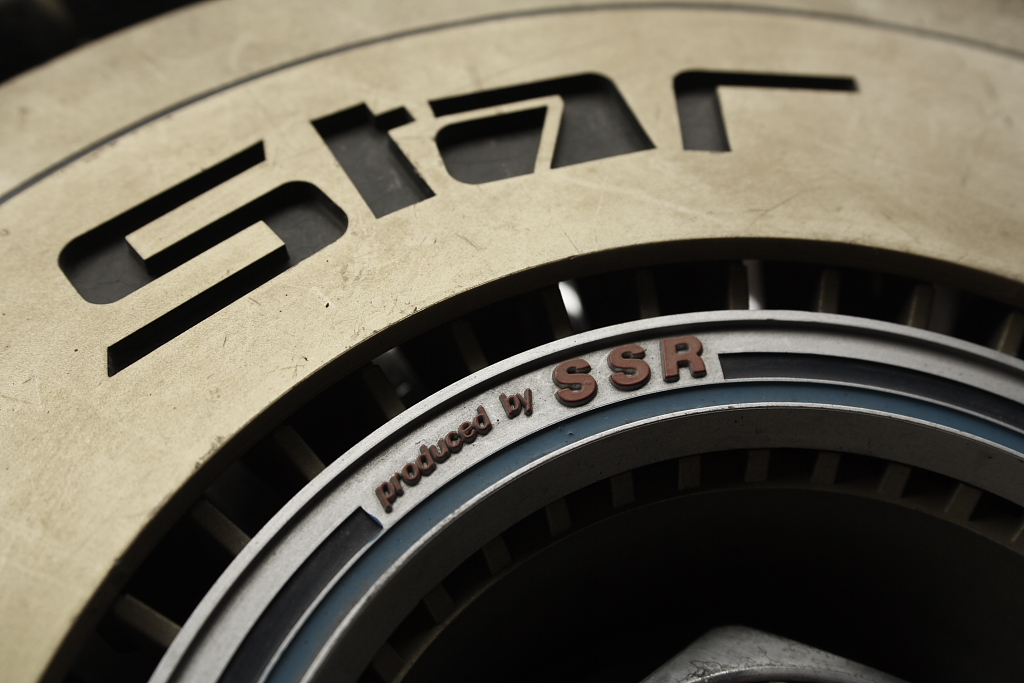 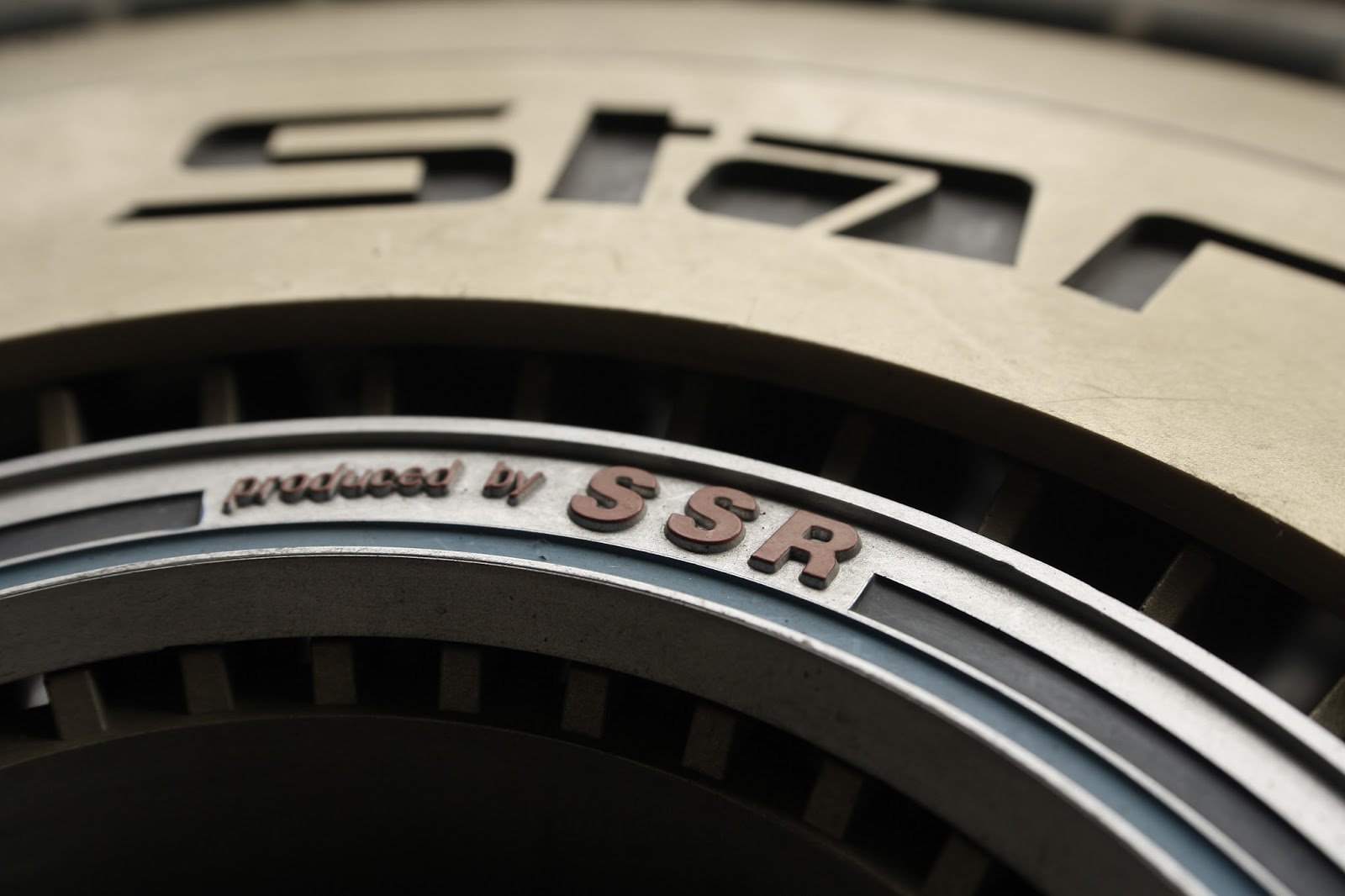 Just the same as they do on the Volk 84C covers I've posted about before, this inner ring is simply pressed into the fins on the main cover. 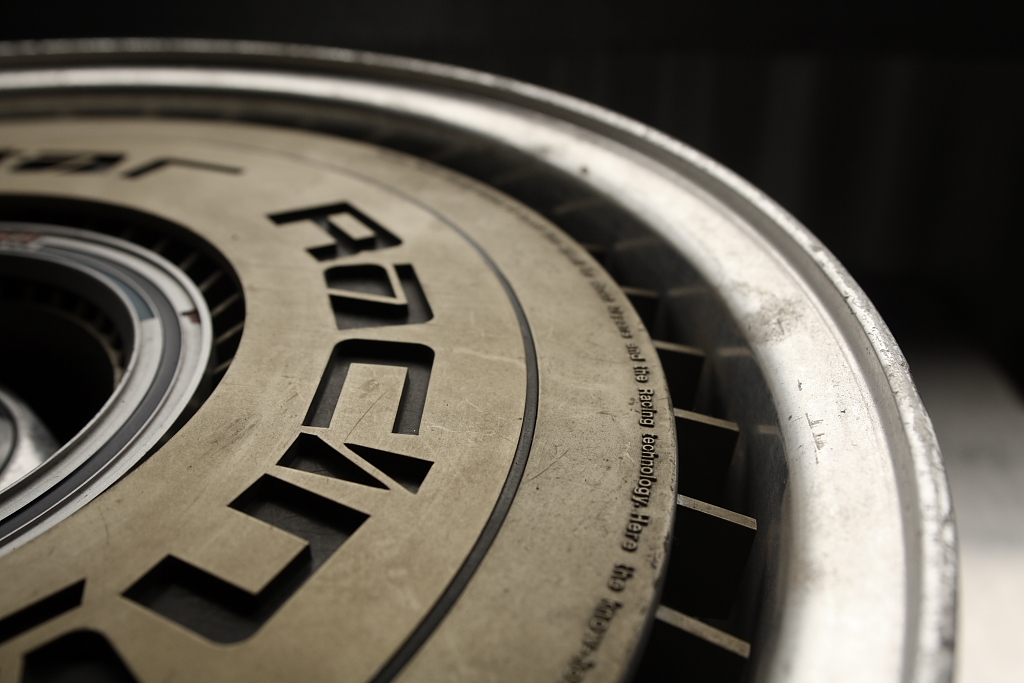 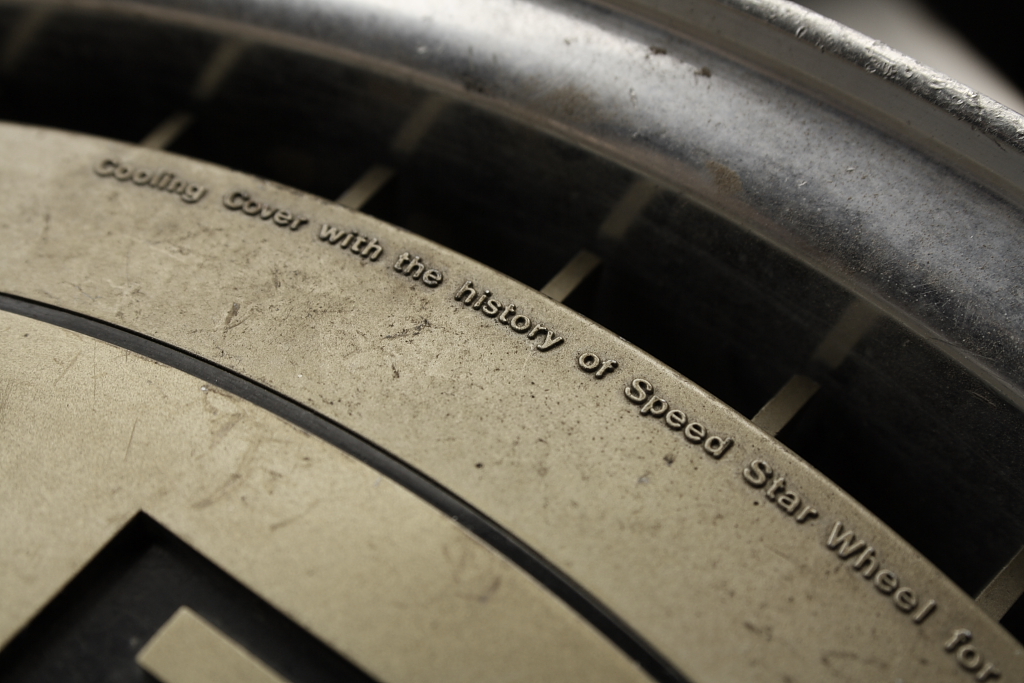 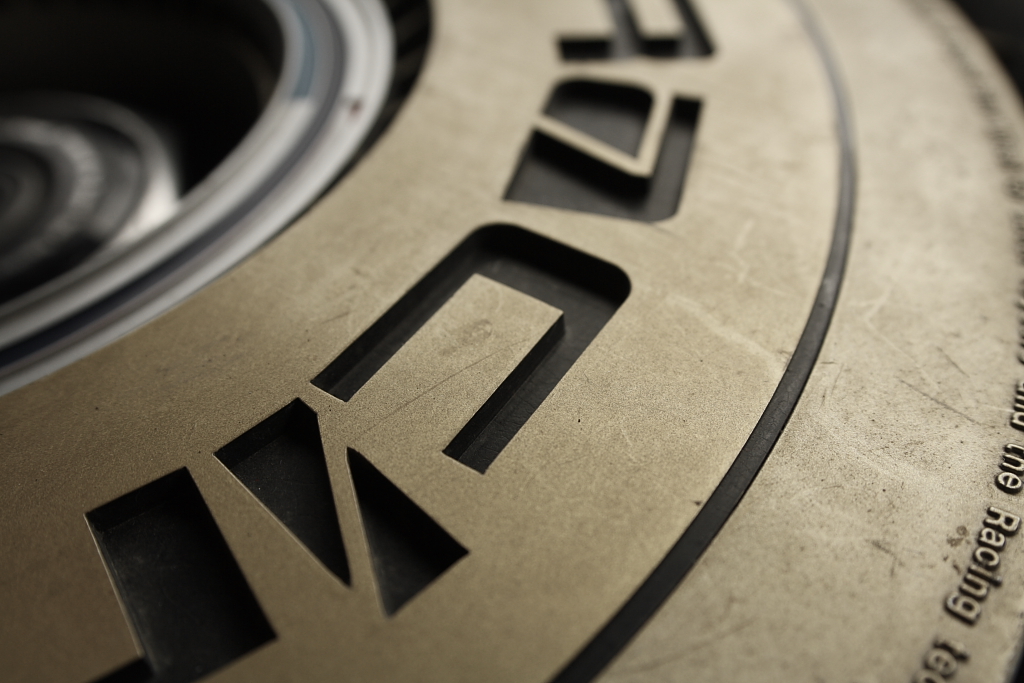 The cover itself is actually made out of three pieces, which will probably be a bit clearer when you see the back in the picture further down the page; but you can just make out the edge of the inner ring in the above picture. Its a quality fit. 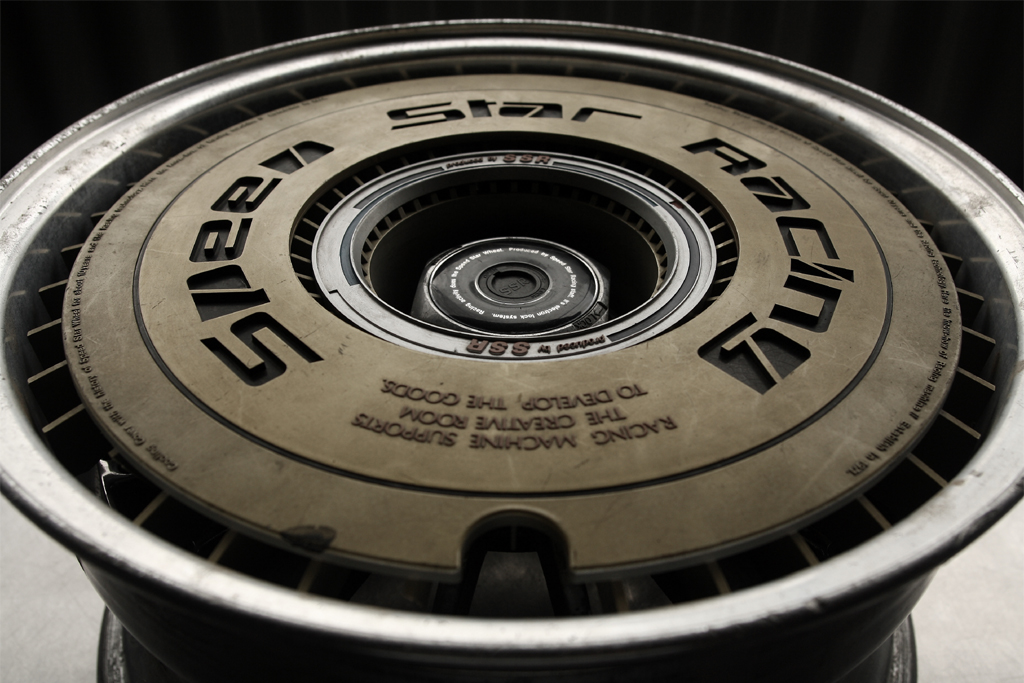 One more of the face..
The cover is about an inch too shallow for this wheel (So actually doing nothing as opposed to just likely doing nothing) .. but still, deeeeep.. 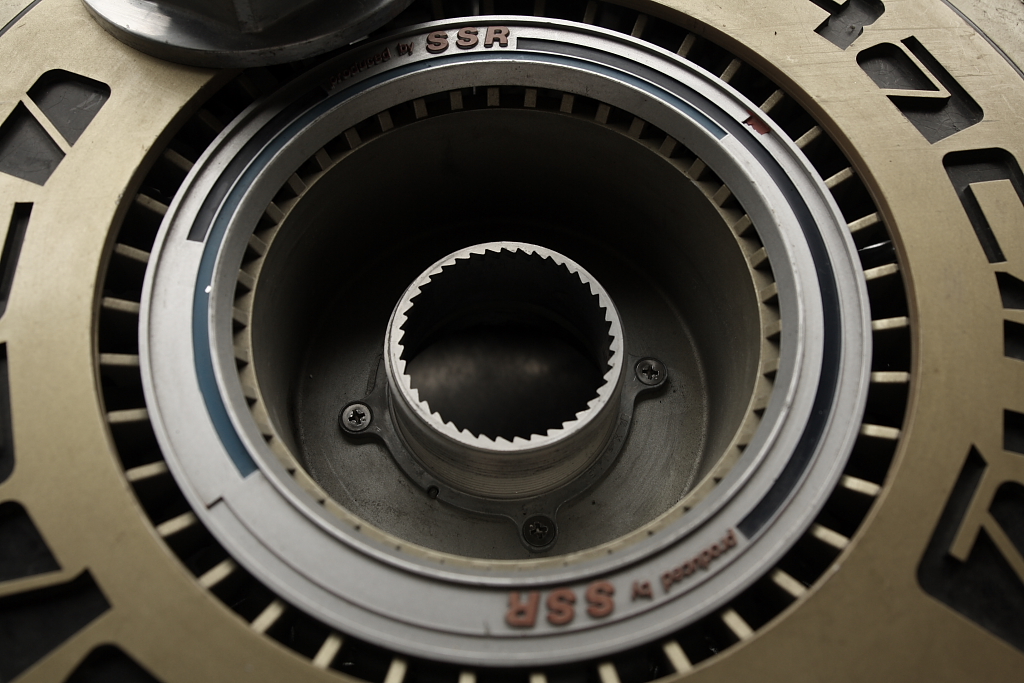 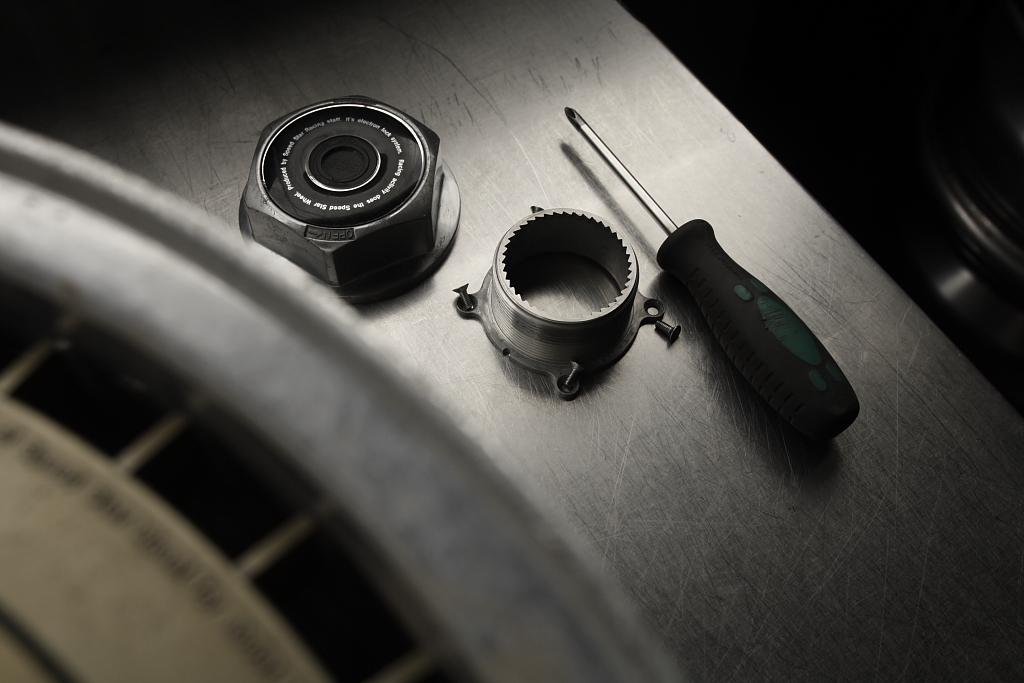 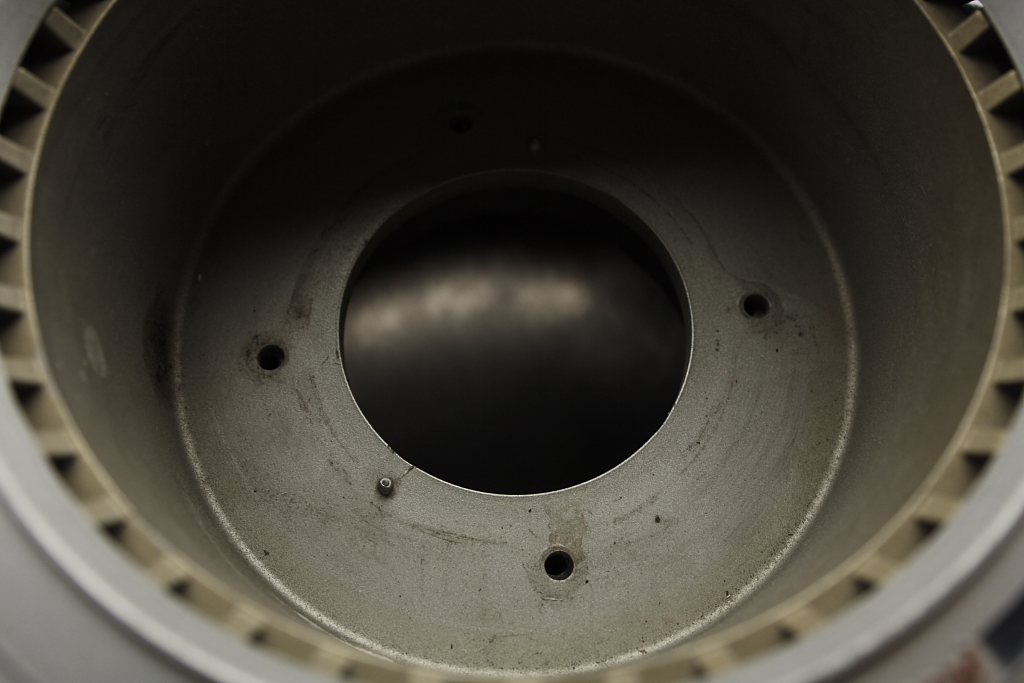 The collar screws directly into the face of the wheel, sandwiching the cover. This setup replaces the EX-C 'plate'.
The above picture shows the locating pins on the cover to easily set the position of the collar. The screw holes for the SSR collars are on the one PCD (two variations depending on the cap), but are spaced in a way that means the collar can only mount in one way. These small plastic pins on the cover align with the notches on the base flange of the collar. 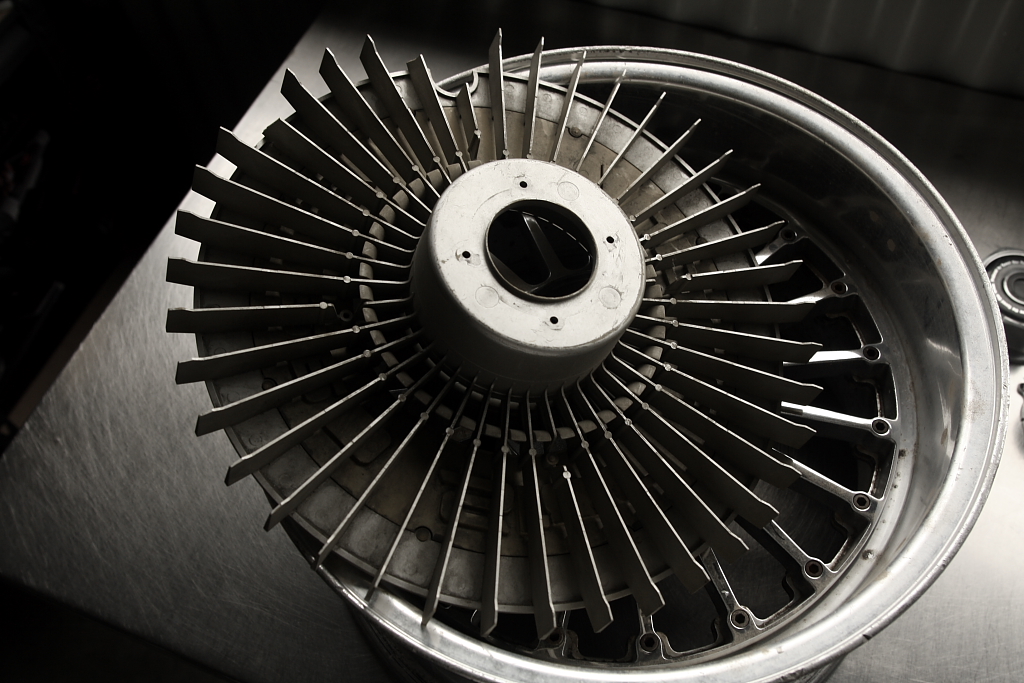 Back of the cover; showing the two separate parts that make up the main cover, and the tabs on the back of the inner ring pressed through the spokes/fins. 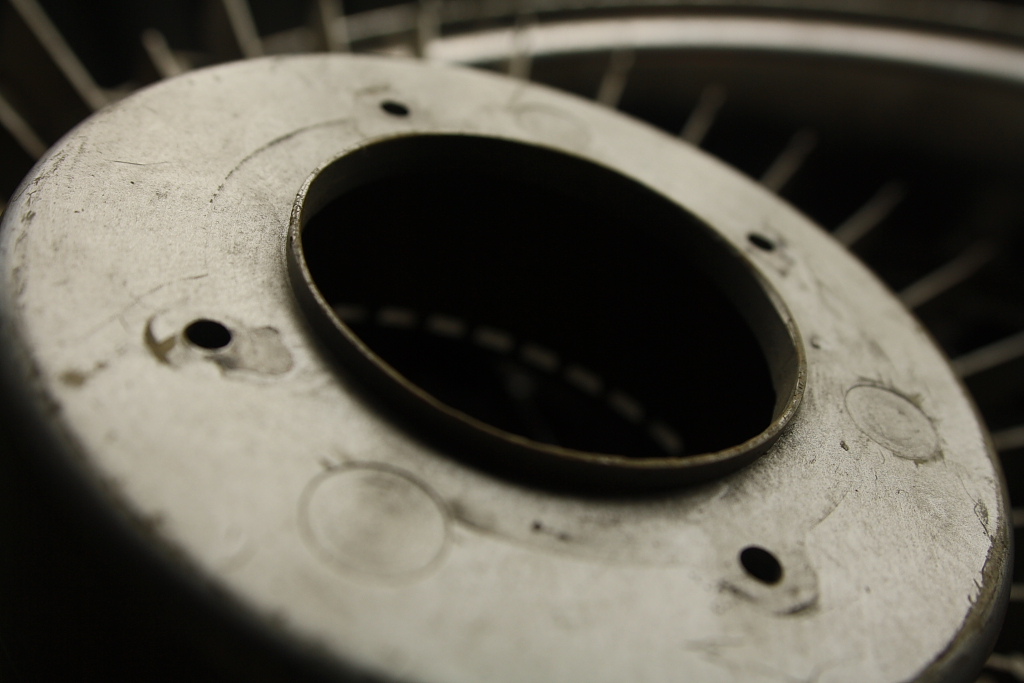 The lip which goes into the centrebore of the wheel, and mounting marks from 30years of use.. 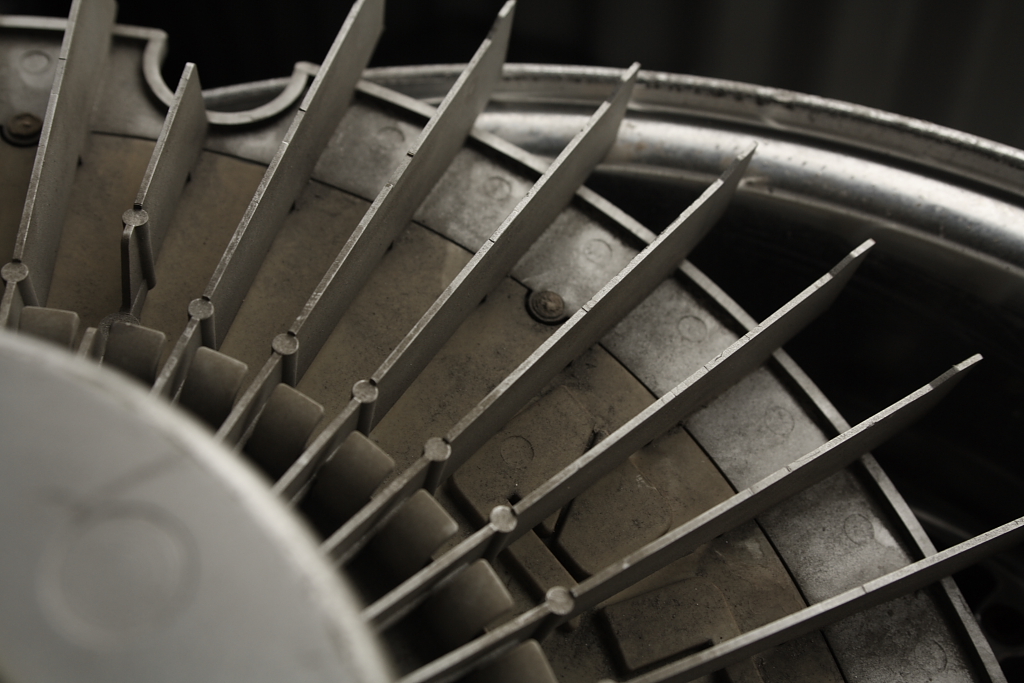 One last pic of the back of the cover; showing the two main parts plastic-welded together at half a dozen points.

TLDR?
SSR EX-C Aero cover.
Had wanted for a very long time.
Got these.
All good things.