Far from a GTS-R - The family wagon..

Going back to another interesting wreckers car here, from late August 2015.
We're already into 2016 and I'd realised I still had a couple wreckers cars I'd been meaning to post from last year. It's not as if there's a time limit on these things, but I do try and keep them at least somewhat current..!
...two others to go, then maybe a wrap-up post on 2015's cars.. 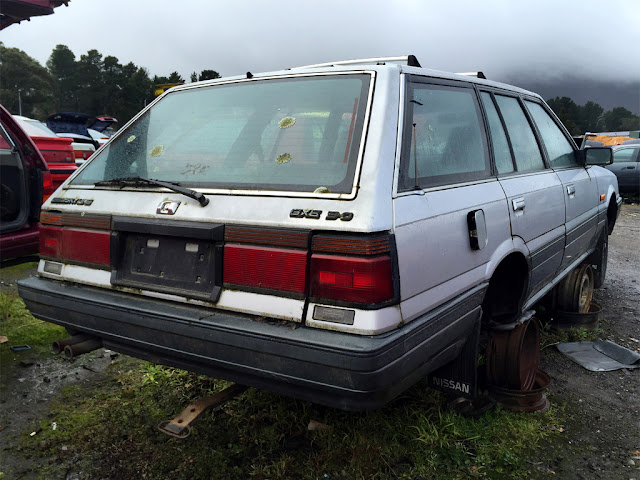 1989 (series 3) R31 Nissan Skyline GXE Wagon.
Top-of-the-wagon-tree for Australian-made 7th-generation Skylines, since the luxury (Ti) and Sports (Silhouette, Silhouette GTS) variants were sedan only.
When it came to wagons; you started with the 4cyl (CA20) Pintara's, then into the Skyline for the GX or Executive.. and finally into the GXE if you wanted a little 'more'.. or couldn't resist that two-tone paint..! 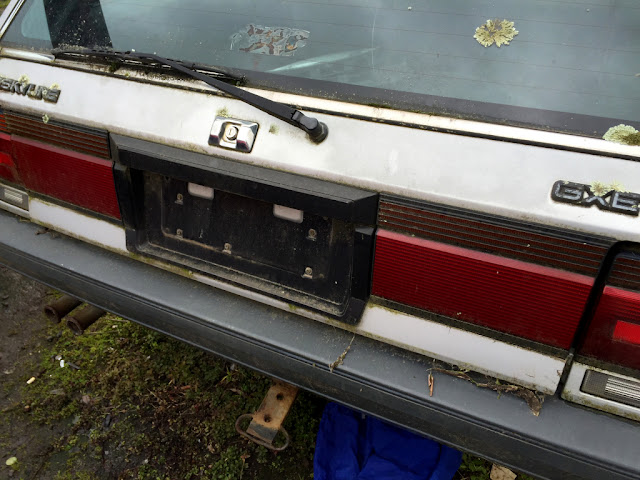 Enough nice details and extra equipment means that if you want an R31 Wagon; you want a GXE.
This full-width garnish at the rear is GXE-specific, and does help on a rear-end that sadly didn't get the classic signature Skyline round units. 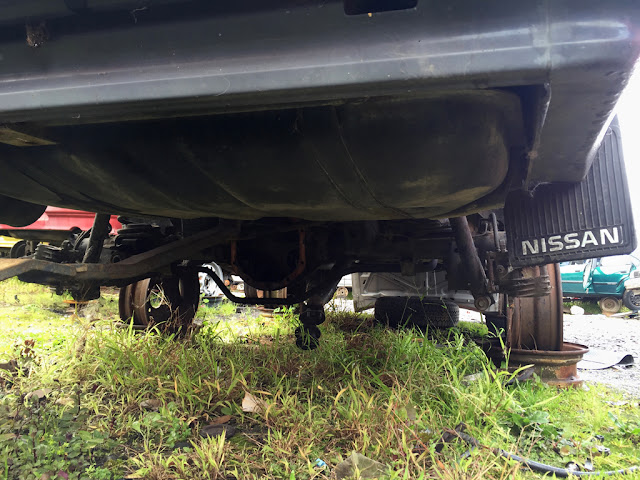 Underneath, and a shot of the stout BorgWarner 28-spline solid-axle rear fitted to Australian Skylines. These axles and diff centres get pillaged the moment an R31 hits the yard.. 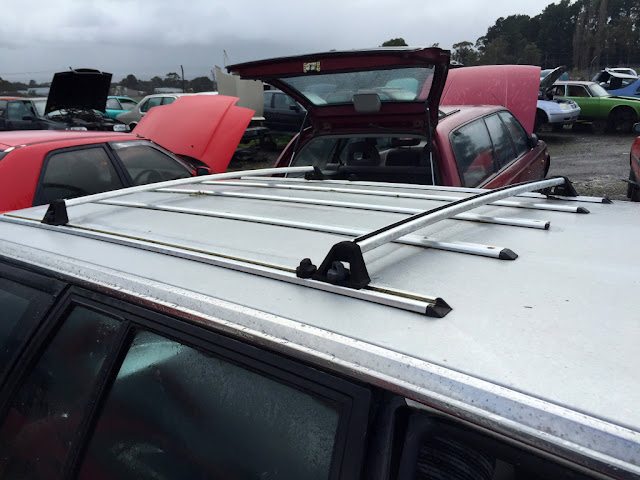 Accessory racks - I love the look of these things on the wagons.. 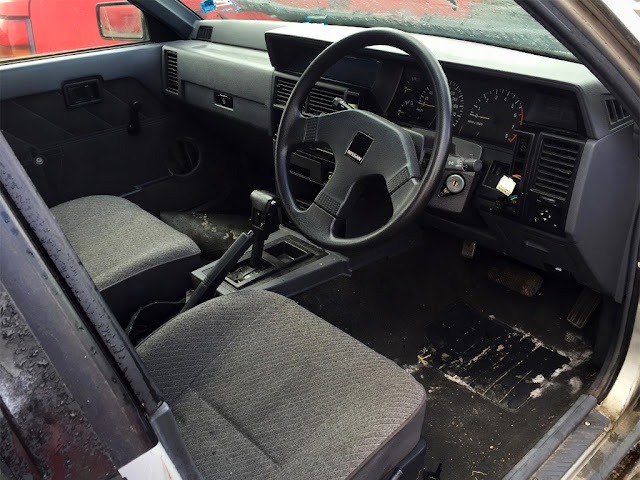 (For reference; the console, footrest, armrests, and lock surround are already missing here)
Inside is a little grubby, but would genuinely clean up well.
The tops of the doorcards are usually the first thing to fail, but good quality materials used throughout means these largely hold up very well. 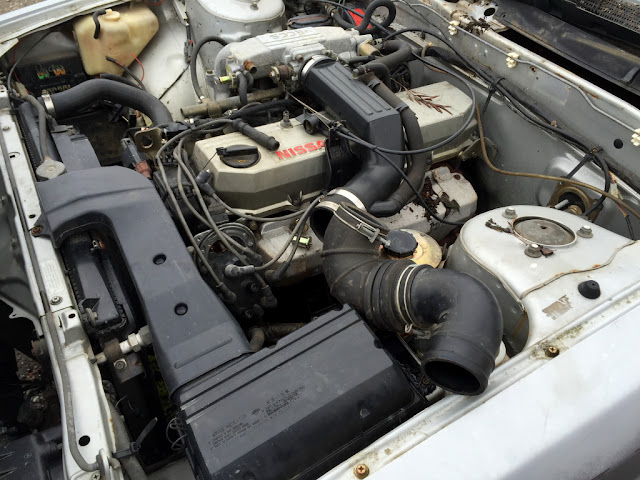 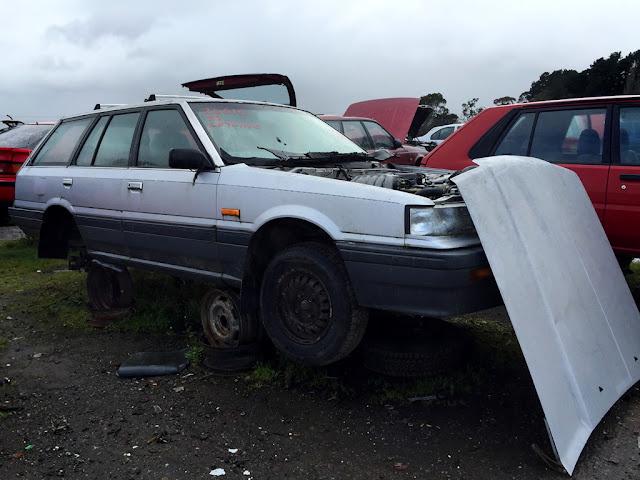 ..and one last shot from the front.
Looks as though the bonnet has been removed so someone could take the wiper mechanism.. otherwise it's a little odd seeing it like this!

As mentioned above; the GXE is typically the one to get if you want a wagon, with the wagons being somewhat rarer than the sedans for a start. This particular car is a facelift Series 3 car too, and in a nice colourway (silver on grey with the grey interior).. which all makes it a bit of a shame to see this one here.

Not sure how much of this car was stripped before it went off to be scrapped, but I did salvage at least one thing.. 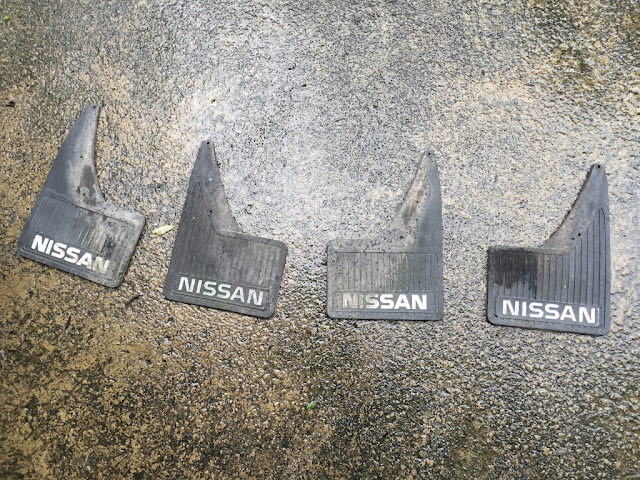 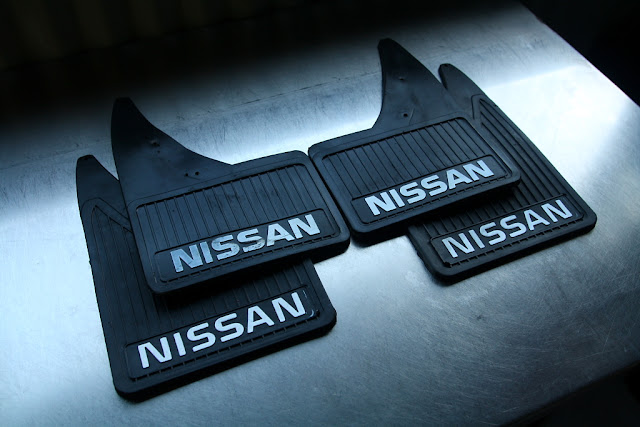 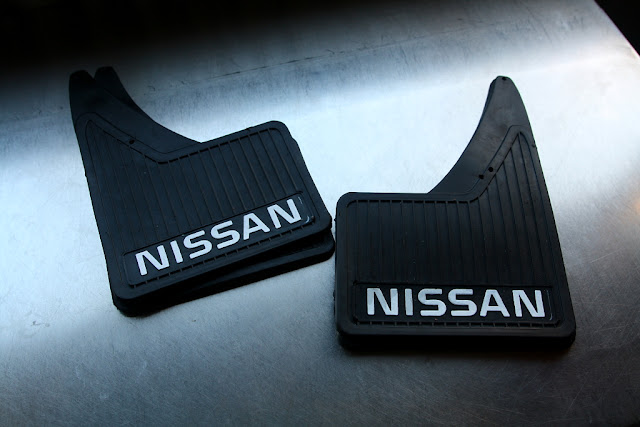 Generic Nissan accessory mudflaps!
Only a couple dollars, and don't take up much space. They just looked too good on this wagon (better than the usual moulded units) and may just come in handy one day..!


Now; the original brochure for the late, standard, Skyline range. Interesting that Nissan must've moved the Ti and Silhouette into their own brochures... 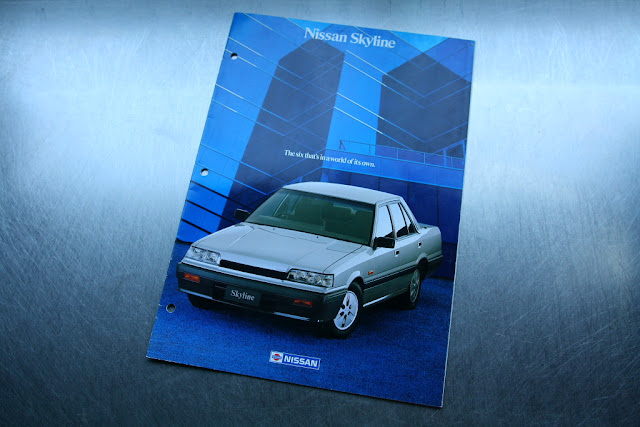 The six that's in a world of its own. 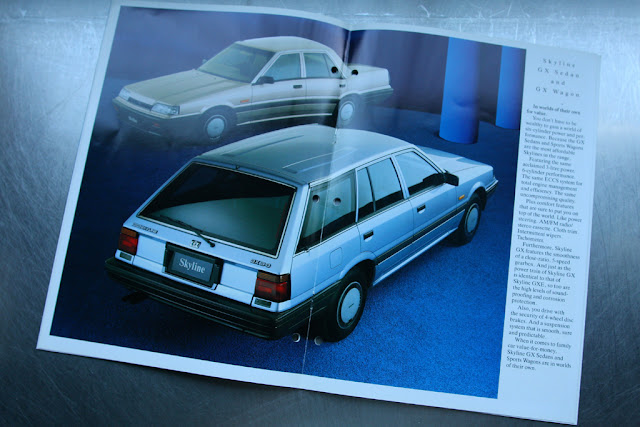 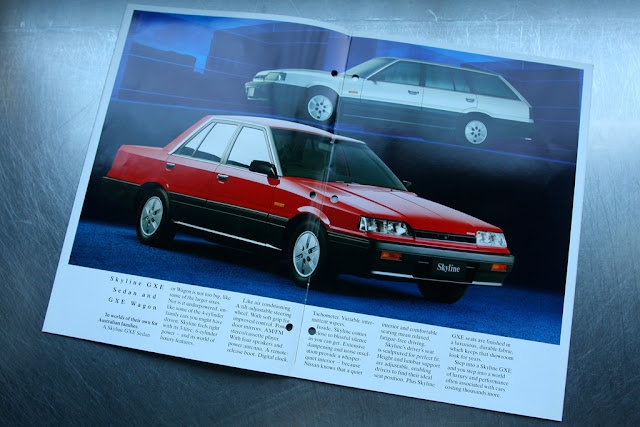 Skyline GXE Sedan and GXE Wagon.
The silver wagon shows just how sharp the car above would've looked 27years ago.
As for the Sedan in red - damn that looks good! 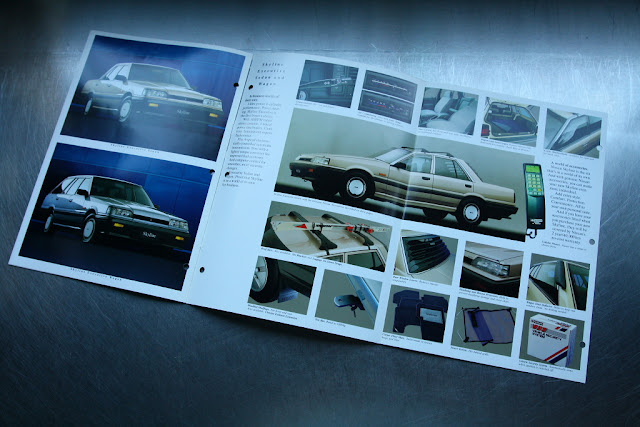 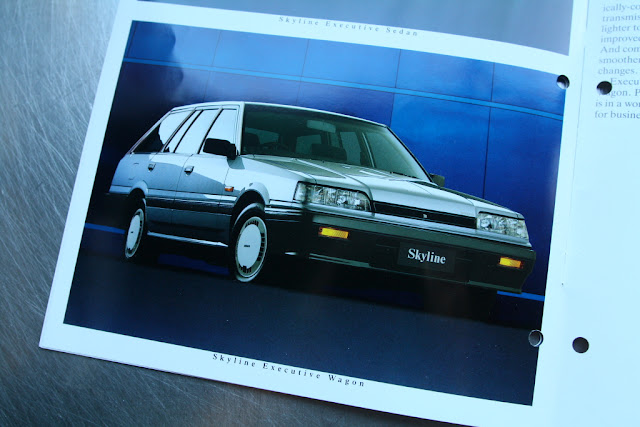 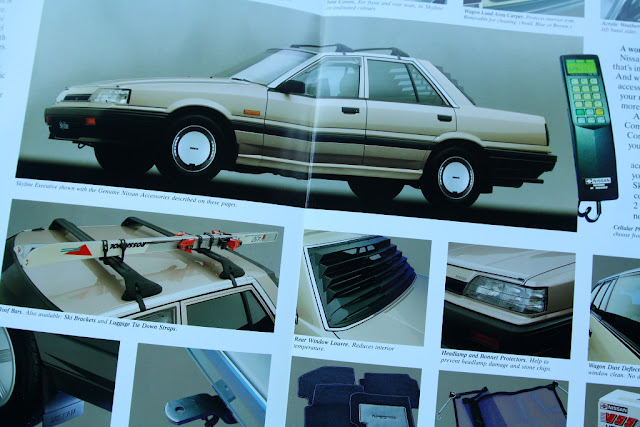 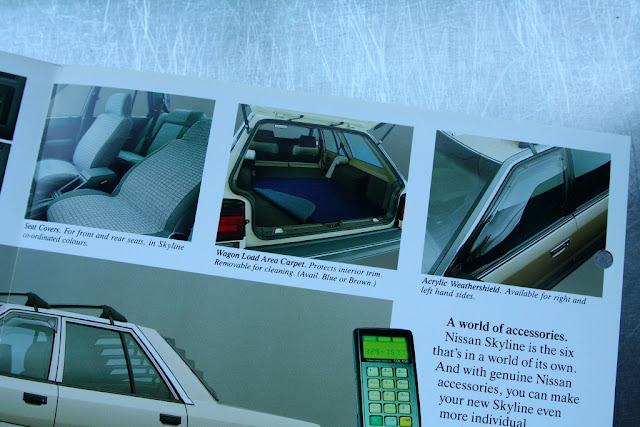 A world of accessories.
The car-phone and rear louvre are stand-outs here! 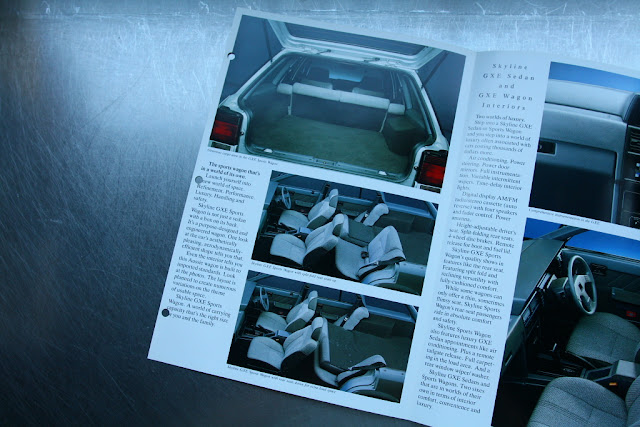 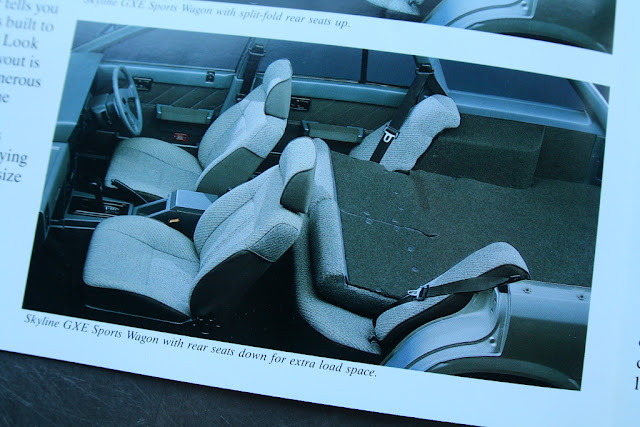 A great shot of the interior, and the handy split-fold rear seat.
Can't quite figure out what they decided to mount the passenger upper seatbelt to! I think I would've just left the whole belt off.. 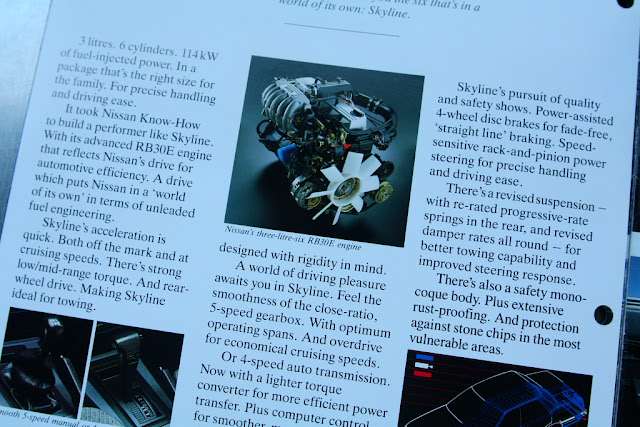 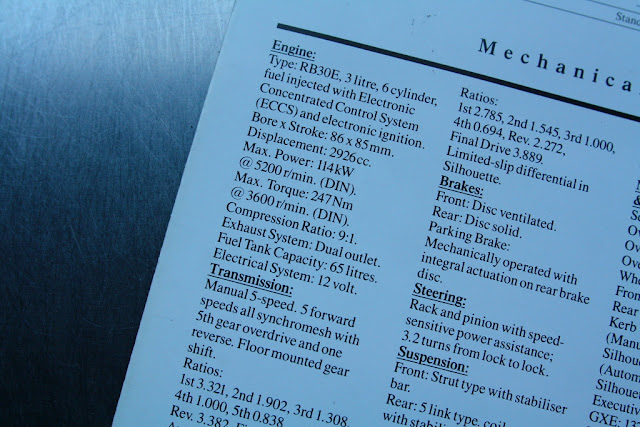 3 litres. 6 cylinders. 114kw of fuel-injected power. In a package that's the right size for the family. For precise handling and driving ease.

Done.
Not bad finding a wagon in an identical spec to the brochure car eh! I'd like to say it was intentional, but uhhh....