..and its VERY basic equivalent.

Well how about that.

As mentioned in last week's red R31House 7th-gen Skyline wagon post; Australia does still have a decent supply of these things, despite what seems like everyone's best efforts of scrapping every last one. These local wagons may be a far cry from the Japanese-market Passage GT more often than not; but as a basis for a similar project.. they're MORE than on the right page.

So...
Early Saturday afternoon. Bayswater, Melbourne, Australia. It's fifteen degrees, overcast, with rain on-and-off.. as we head into Spring.
Quick browse through one of the usual go-to wrecking yards while on my way past... and what do you know: 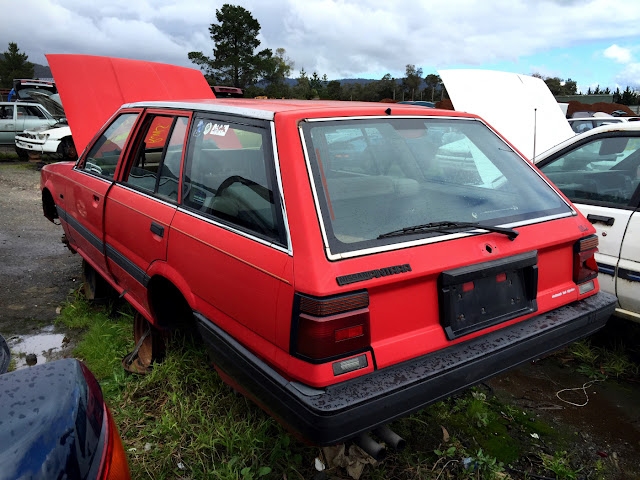 ...it's the R31House red R31 wagon's very basic equivalent. Its slightly-challenged cousin.. but a relative nonetheless. The three million Yen shy of its RB26DETT-powered potential...

Being a Pintara (rather than a Skyline) there's unfortunately a CA20E four-banger in place of the RB30E six, but again.. as a basis for a similar project, it's a non-issue. Essentially this is a straight, rust-free, R31 wagon... in red. The potential is there.

Sadly that ship has sailed for this particular example. While that's a "why would anyone care?" moment for most people looking at what is a ~$500-nugget Pintara wagon... in years to come? Urgh...