But today we are. Right now we will. Because I took a whole damn impromptu-photoset of this thing in a friend's garage last weekend, and bloody hell.. a 1/6 scale plastic replica of a much-loved sportscar with a plastic doll jammed in it.. well that just makes me smile. 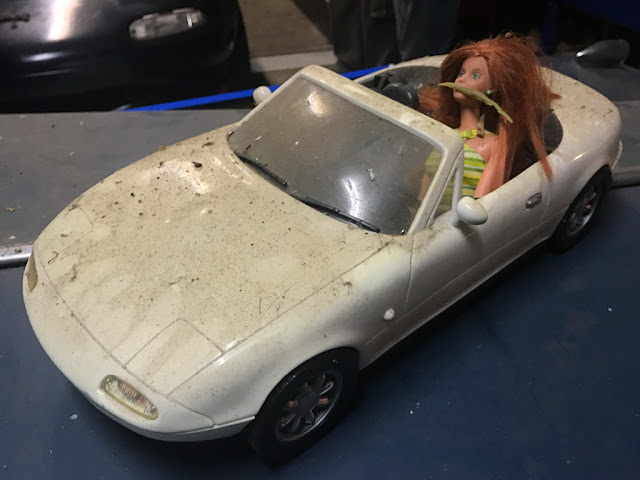 Sindy's 1993 "Surprise SPORTSCAR" - a 1989- NA Mazda MX-5.. or Mazda Miata.. or Eunos Roadser, depending on which market it was you first came across the little Mazda roadster.. 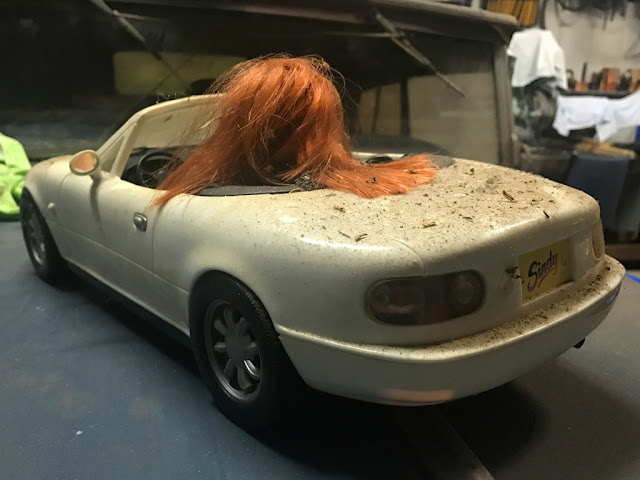 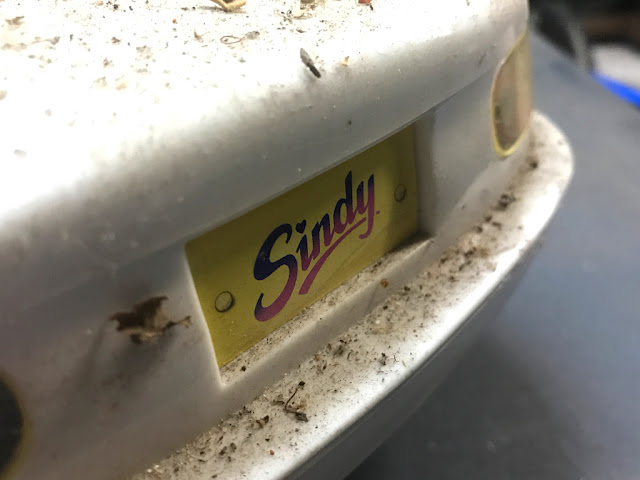 Thanks to a quick bit of googl'ing (ahh, cheers again internet!), I can tell you that what you're looking at was produced in the early 90's for Hasbro's 'Sindy' - an (English) knock-off of Mattel's likely-better-known 'Barbie'.
Whether Mazda knew anything about it.. yeah, I don't know. There's likely nothing really negative about it for Mazda either way; good for subconsciously converting little girls in to Mazda customers decades-on, and a hilarious skeleton-in-the-closet for those "track-day bro!" MX-5 owners when these cars finally became acceptable/cool/appreciated. 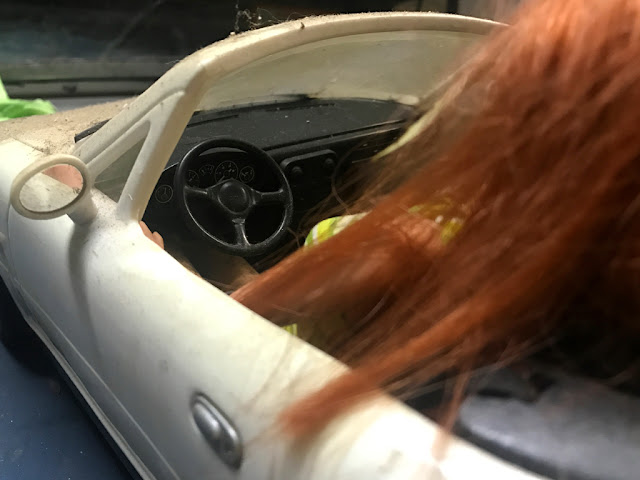 I was more than a bit surprised by the detail on this thing anyway. The random accuracy. On a toy designed as an accessory for a doll? Wow. I'm impressed. I reckon I had toy cars - designed with no other purpose than being a smaller reproduction of a car - that were worse than this! 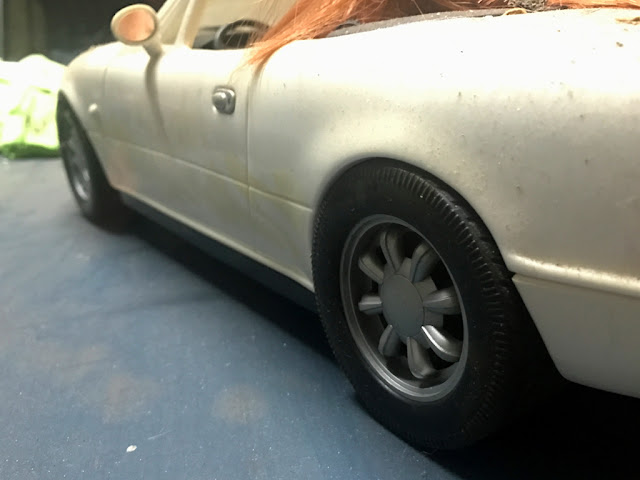 The most obvious sway from a more accurate replica being those wildly chunky tyres on the eight-spoke (there's one for the trainspotters!) 'daisies'. Slammed, spacers, and 235's on the factory 14x5.5" alloys; Sindy's got taste - It looks tough! 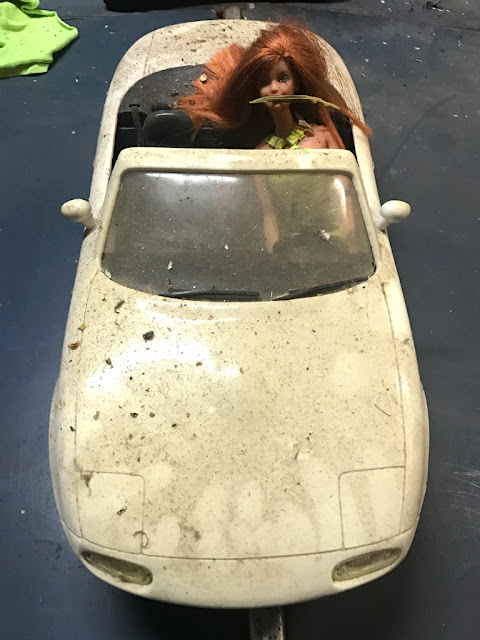 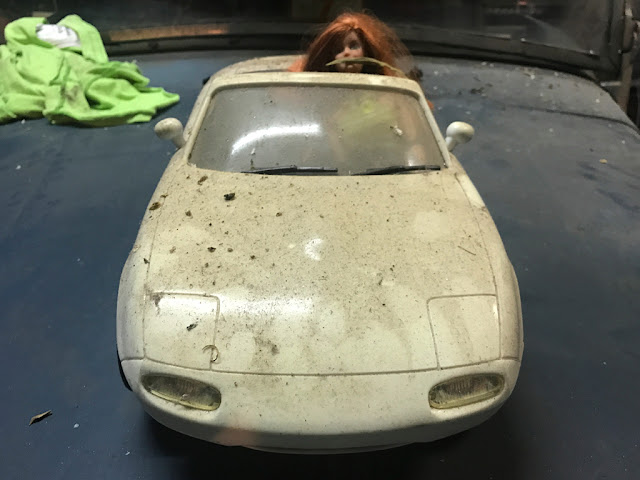 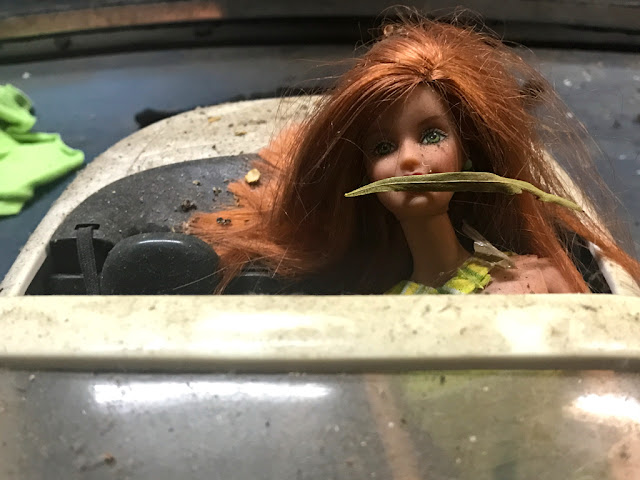 I don't think she'd left the driver's seat in a while.. 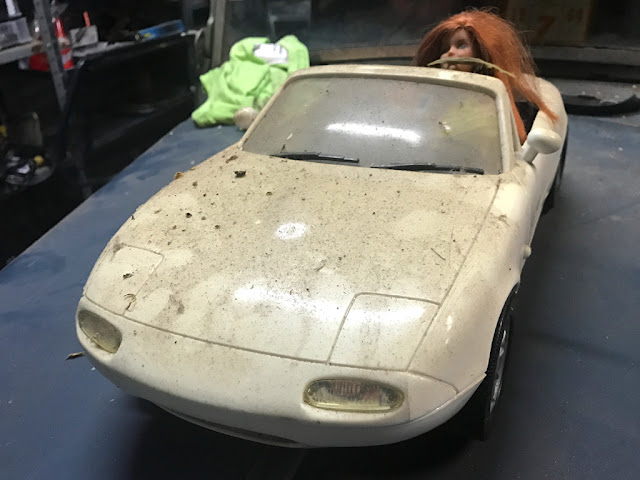 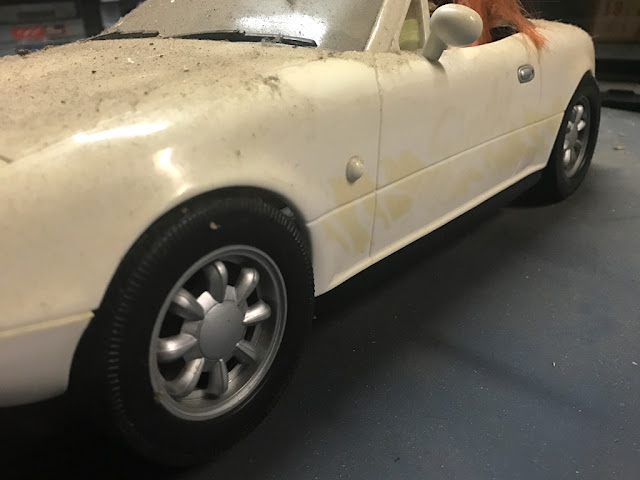 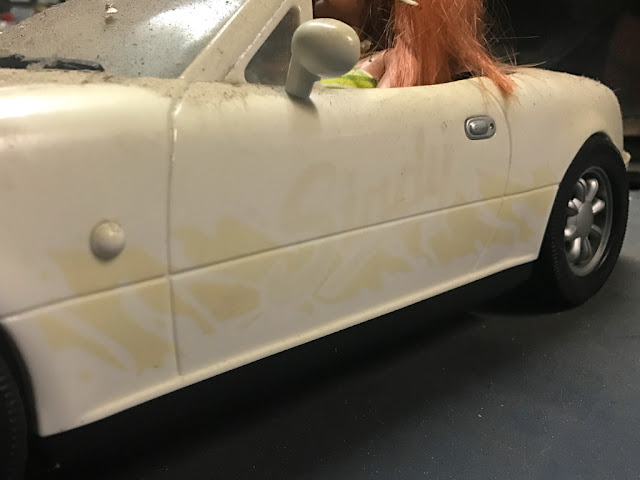 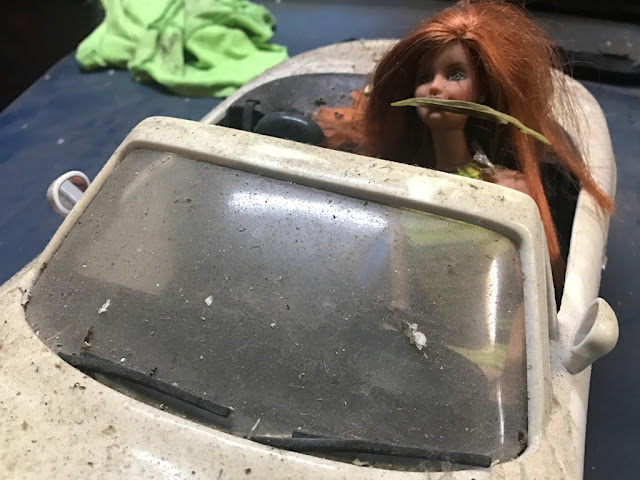 ..oh, let me just fold those (NA-update) mirrors for you. Genuinely killer detail..

To get a better idea of what this thing looked like new, I jumped onto good ol' ebay in the search for an original un-played-with example.. or one that hadn't sat perched on a garage shelf for the last bloody decade!
Incognito-mode activated (wisely, as I don't particularly want ads/suggestions/emails on sweet Sindy accessories deals..) and away I went: 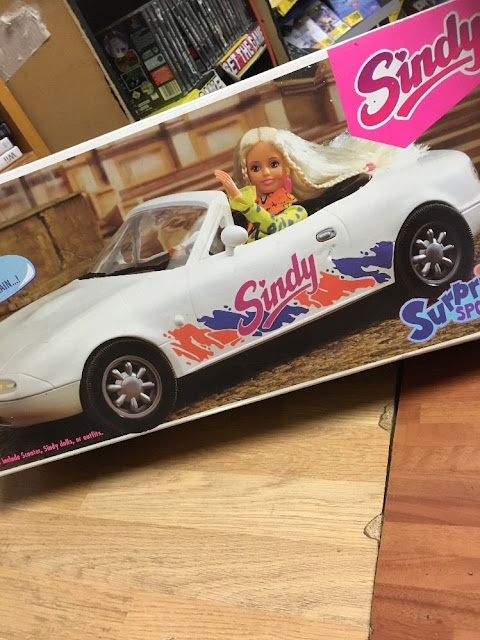 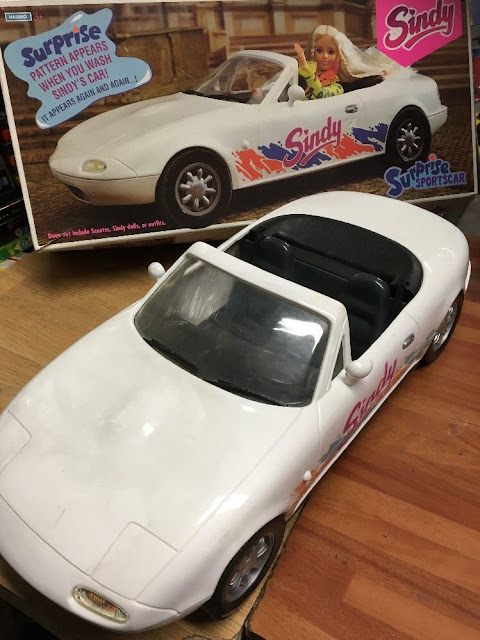 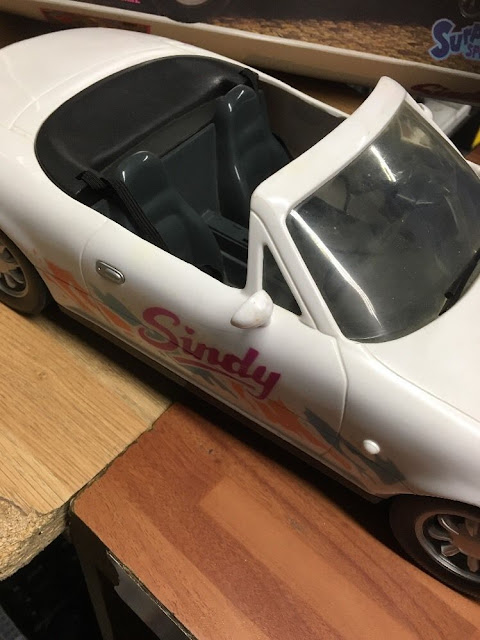 18pounds Buy It Now out of the UK, here; yet if you're keen to spend an extra 20 for whatever reason... 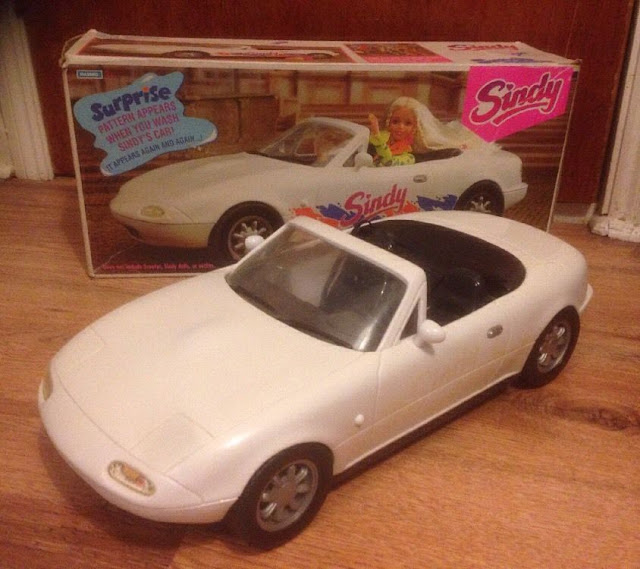 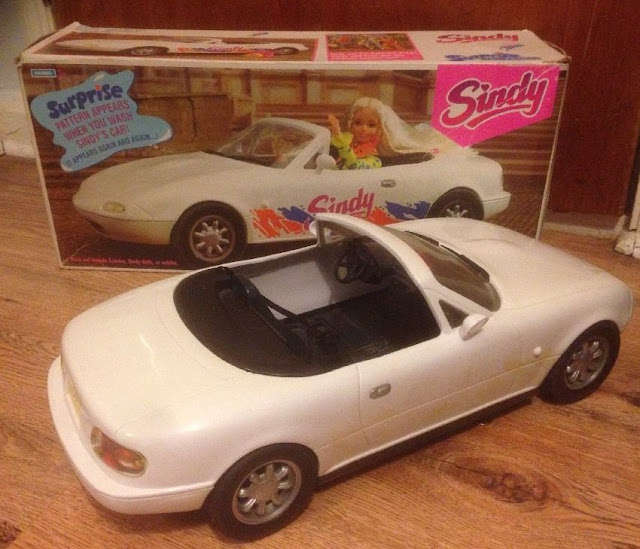 ..there's this one - also not surprisingly in the UK. 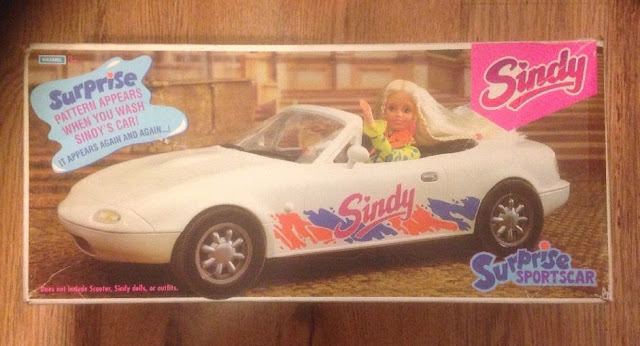 The second listing (kindly!) gives us a good look at the original box art too.. 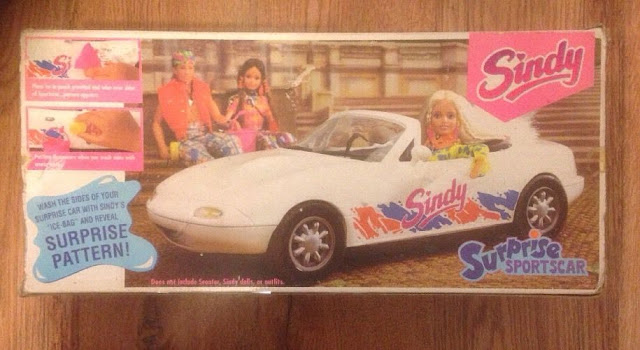 Yeah, I had no idea that's how the side decals worked. Here's me thinking it was just faded to all hell.. 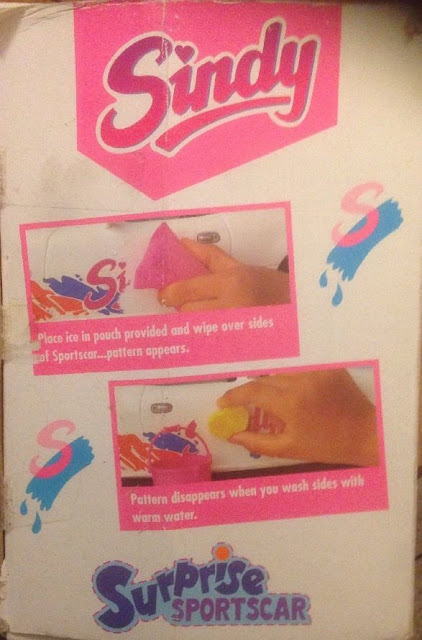 ..but no(!), you wipe it with a frosty sponge for it to appear, then with that love-heart-shaped number to activate subtle-Sindy mode. It's logical. 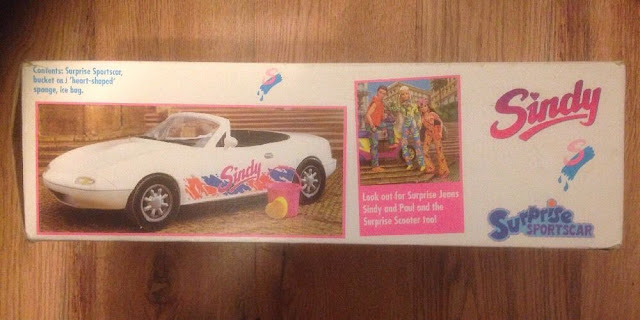 Be sure to look out for Surprise Jeans Sindy and Paul and the Surprise Scooter too! "Ask your parents for their credit-card details!"

And we're done.
Fun.
Learn something new every day..