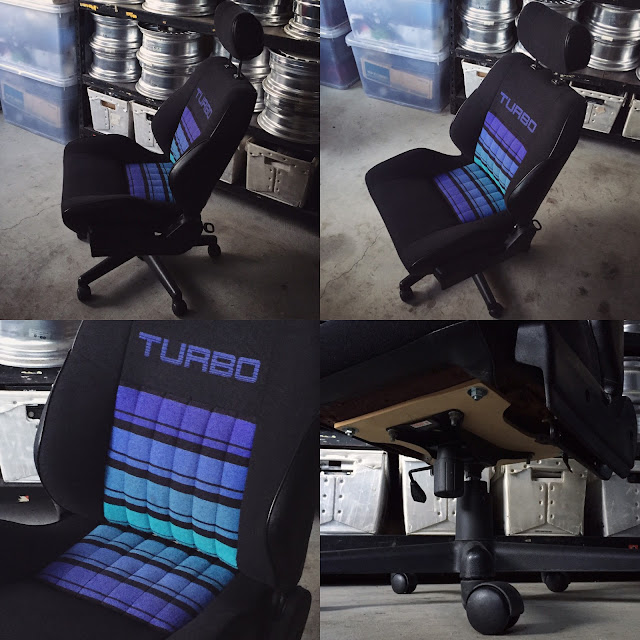 Driving a desk has never been so stylish.
The Shoulderpads.. the piping.. the half-vinyl trim.. the semi-wraparound headrest.. the purple-to-aqua fade fabric.. and the less-than-subtle TURBO lettering emblazoned across the backrest. Oof. It's 1985 in the form of a seat. 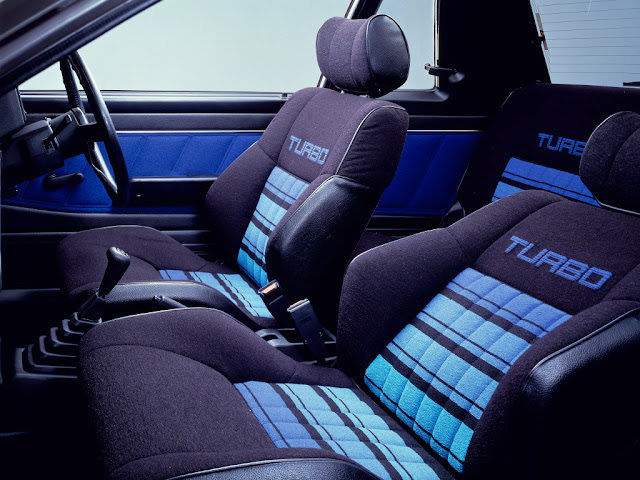 You may have seen a bit of this fabric before, in a post about the N12 Turbo Nissan twins from September last year.
It's the standard trim for late, Australian, N12 Nissan Pulsar Exa Turbos... the early style being somewhat similar, but with a subtle grid pattern instead of those deliciously-obnoxious coloured panel sections.
Seeing this exact fabric in the red '85 in the wreckers last year had grabbed my attention, so when I saw the same seats in another Turbo N12 a few weeks back... ooohhh... I just needed any reason to buy one. 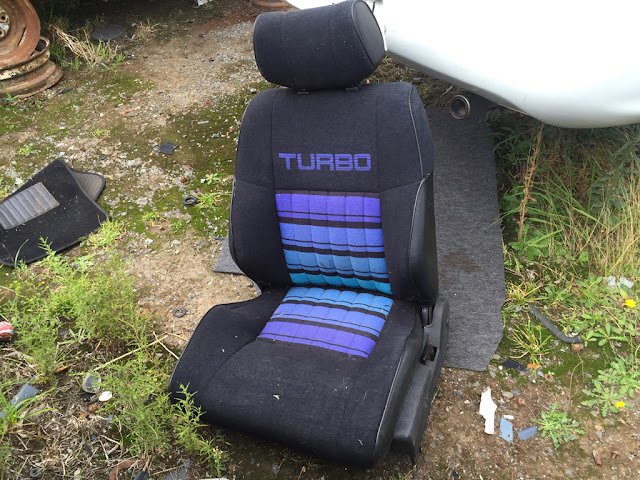 Removed from the car... dust and garbage roughly swept off, and sitting in the sun.
Usual wear to the driver's seat bolsters means I simply went for the passenger seat - and just look at it! A little grubby, but looking straight through that... it's really not half bad..!

To give myself a bit of time; I cleared some space in the back of a neighbouring N14 Pulsar hatch, and put the seat safely inside.. allowing me to go home and think/measure other things up before grabbing the seat.. 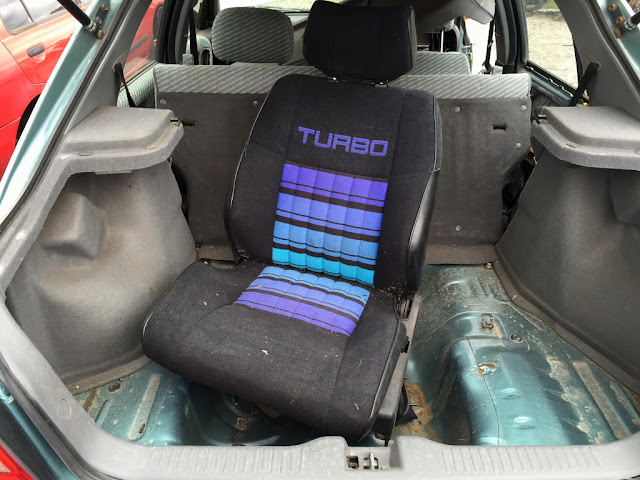 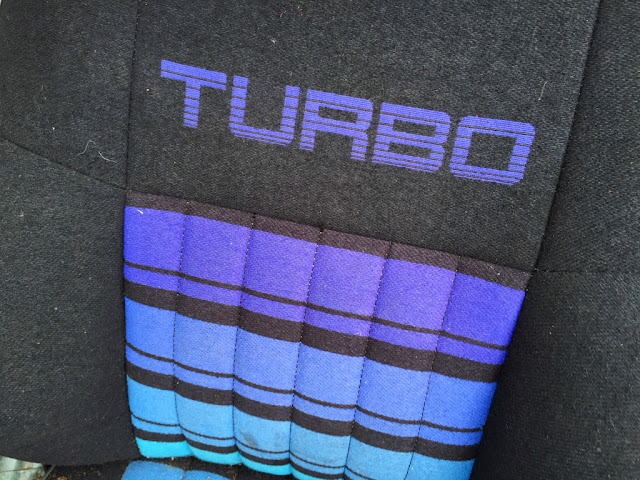 ..closeup of the gradient fabric, and 'TURBO' lettering... 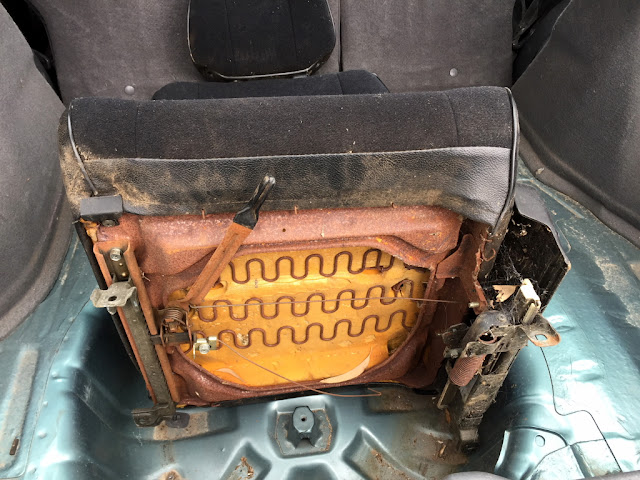 A shot of the underside, which I'd use as reference over the next week or so as I thought the plan over... 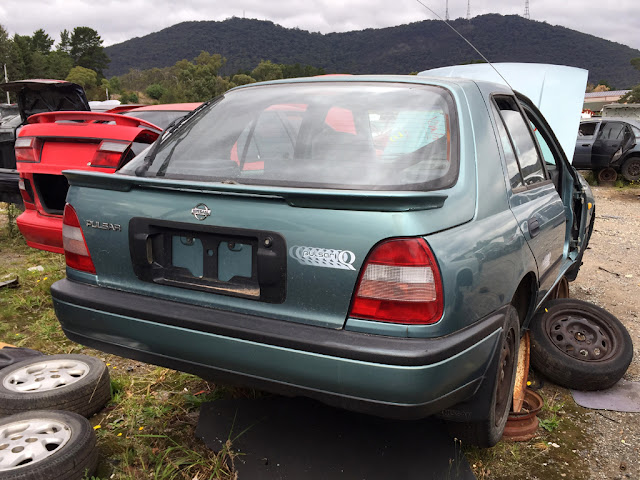 This was Saturday afternoon. 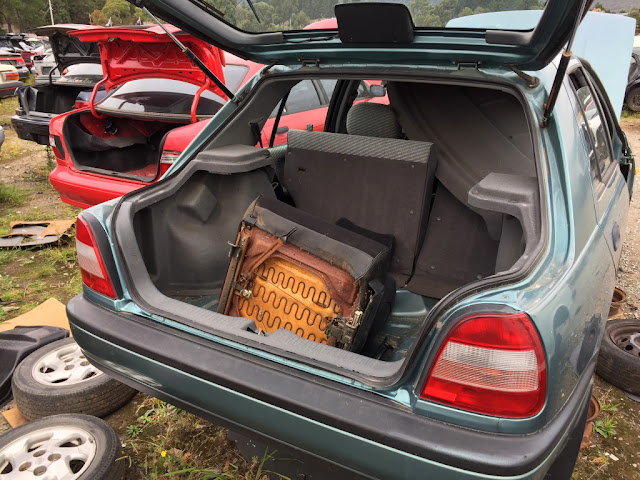 ..Well, it sure didn't take me long to buckle under the pressure, and rush on back to the wreckers!
Others had rummaged around the car over the days between, but my mentally-gold-plated seat is still largely where I'd left it!

It was meant to be. 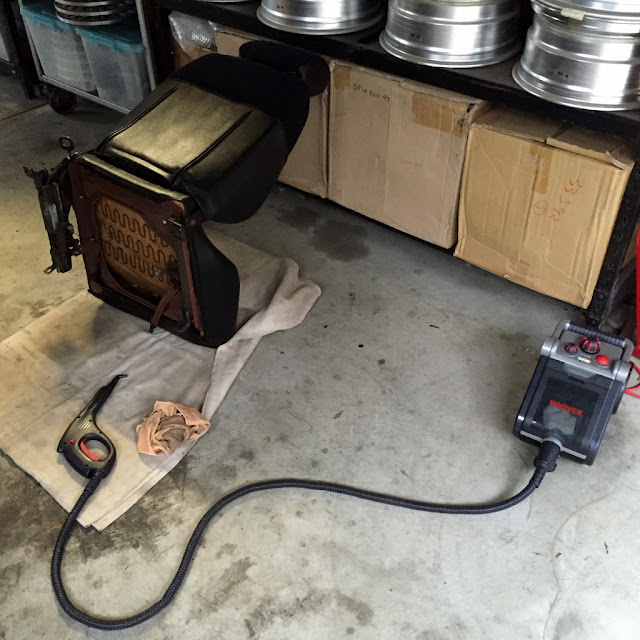 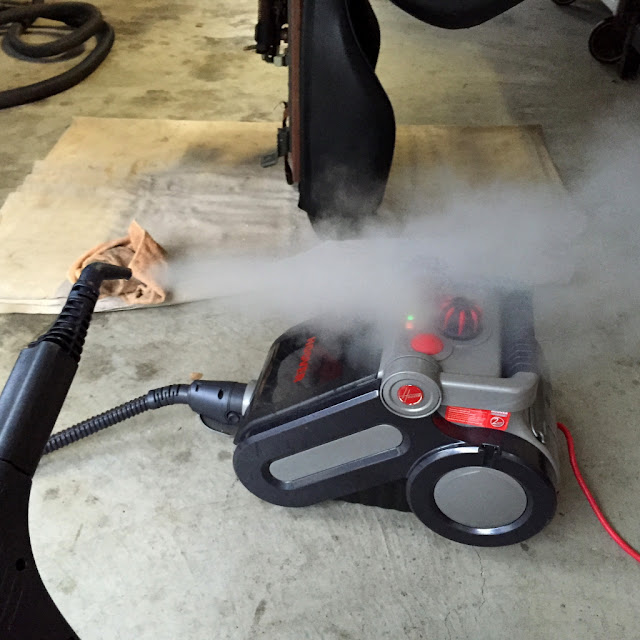 Safely home; cleaned, washed, scrubbed, steamed, poked, prodded, and steamed again.
The 30 year old Nissan bucket seat getting the most love it's likely had in years... and it came up great. 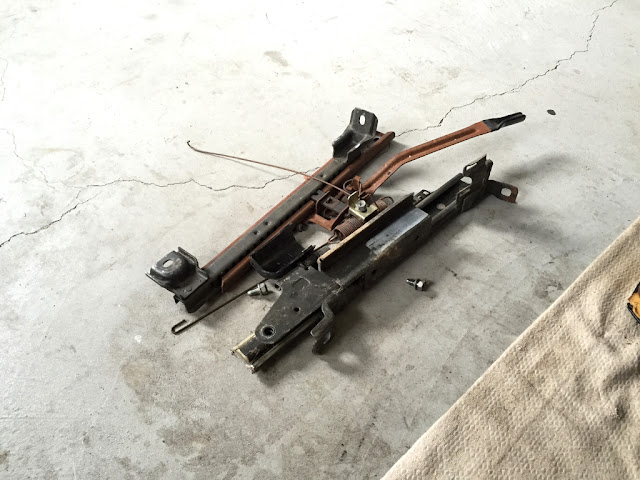 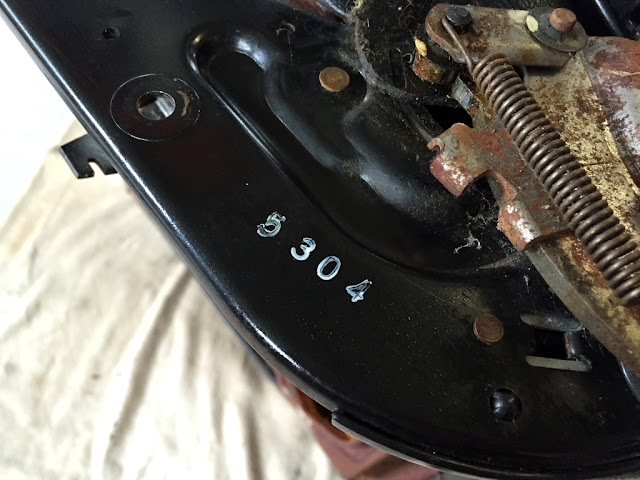 Date-stamp on the frame... 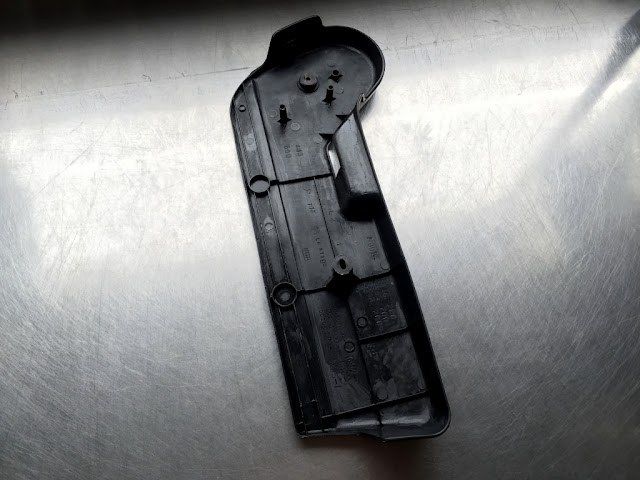 Side plastic trim tidied up.
I'd planned to use this again to continue covering the reclining mechanism.. 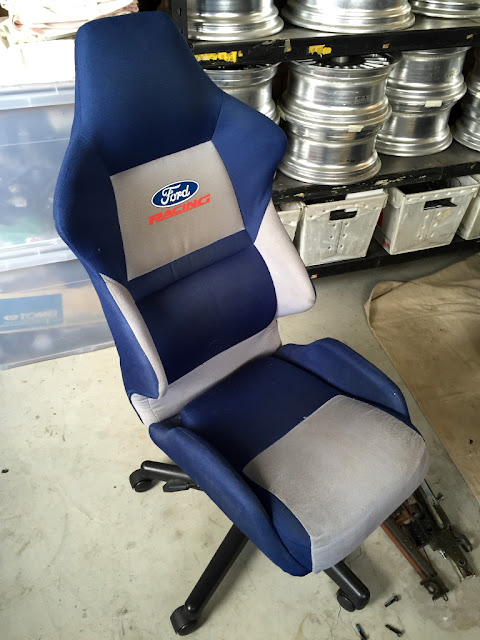 The only casualty out of all of this: my old desk chair - a generic 'Ford Racing' seat. A bit cheesy, but I'd happily run this chair for the last 10-15years.
Time to move on though.. I've got pure-style waiting..! 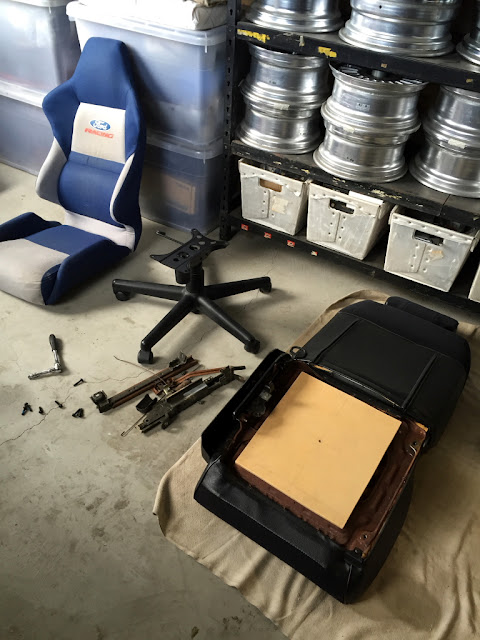 A little measuring, then a piece of MDF board cut to size.
This doesn't have to be particularly strong due to the tiny area it has to bridge (between the large chair-base upper plate, and the flat areas on the seat's underside), but can easily re-do this out of a different material at a later date. 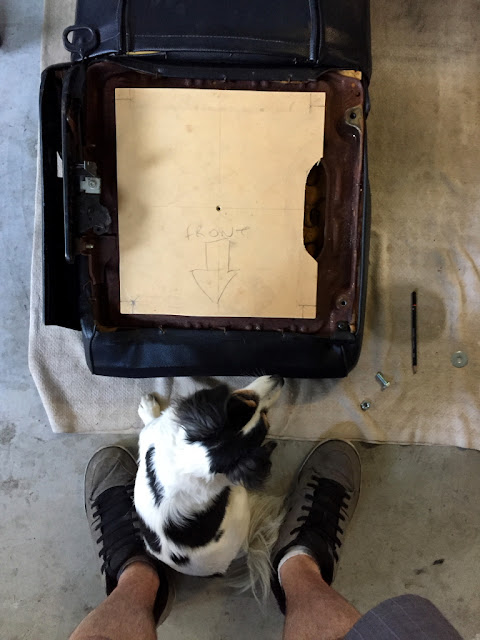 Trimming to size, including clearance holes for my hands... 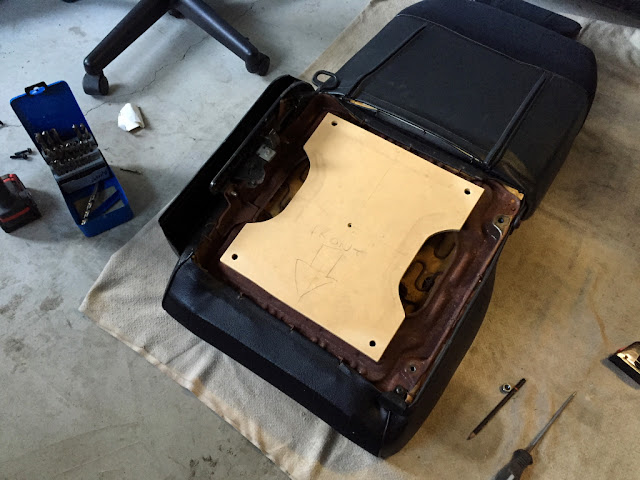 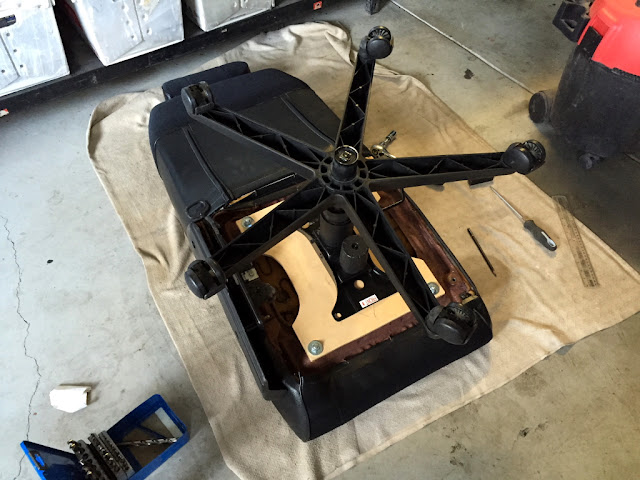 Positioning the base, to ensure its stable even when reclined... 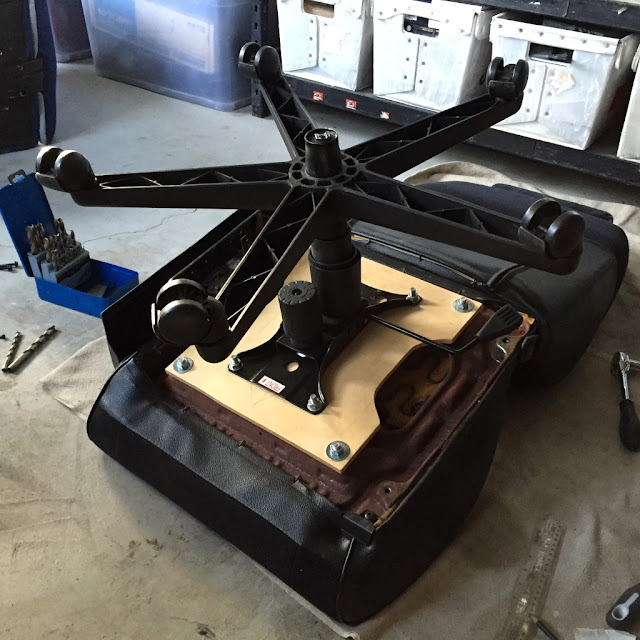 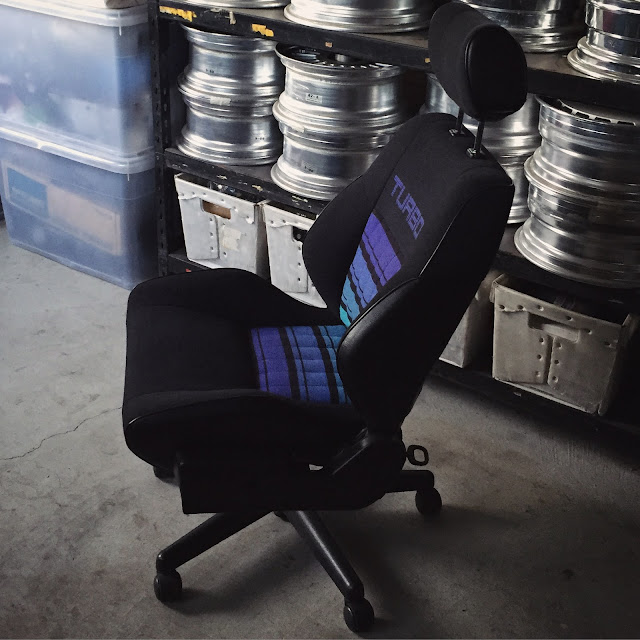 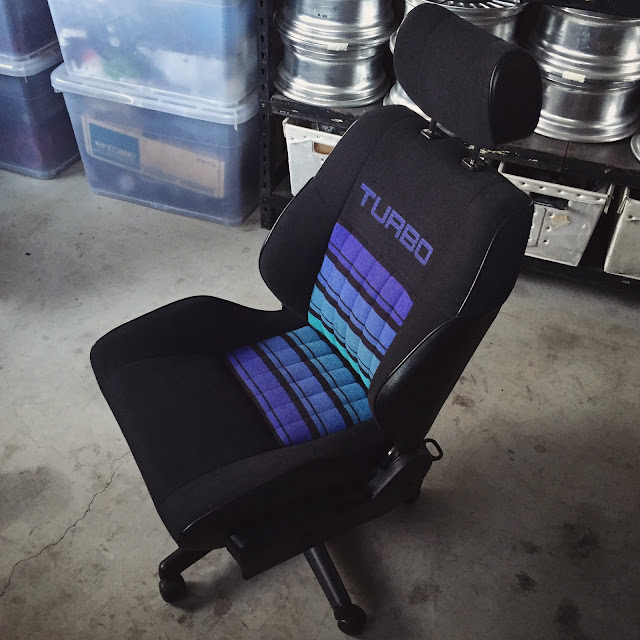 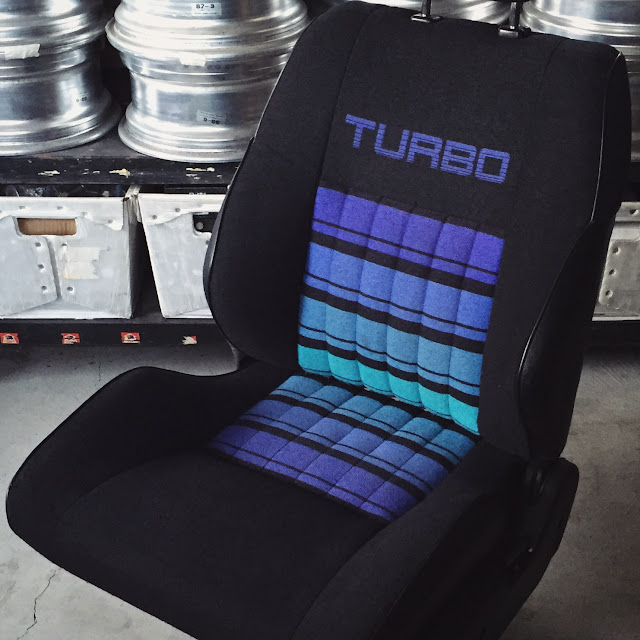 ..I'm more than a little bit chuffed with myself here.

It's been a few weeks now, and I still ABSOLUTELY love this. Comfortable, fits great, and looks fantastic. I'm not surprisingly sitting in this right now... as I type these very words.. and yep, again - stoked.