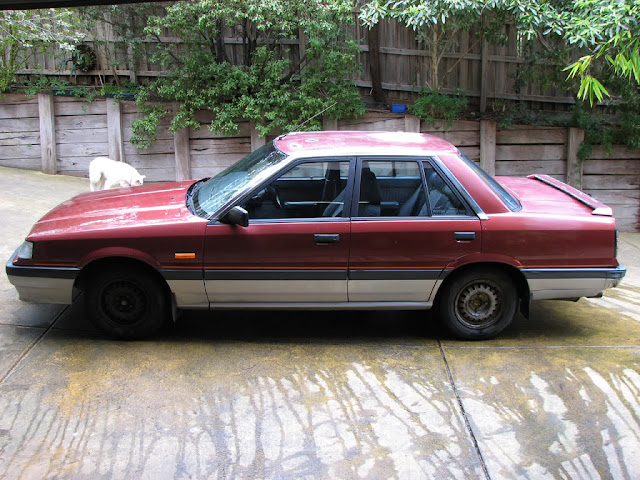 Yikes.
That is what it looked like when i first met the Burgturd.

Its an Australian-built 1988 R31 (S3) Nissan Skyline Silhouette, and a very tired one at that. It was on its last legs, and out of rego - practically had its bags packed to head off to the wreckers.
But having been around my fair share of R31's, it was what i was looking for.
It was a 5speed; and being a Silhouette (the 'sports' model), was fitted with slightly better seats, wheel, full gauge set, and an LSD. This is on top of the things that make the R31 Skyline very appealing for a thrash about the bush - The 3litre RB30E inline six, light body, and a strong solid-axle rear end (BorgWarner 78).
You see, thats was the original planned future for this car - thrashing about off-road.

As usual though, I got carried away and kept tidying it up. I cant help myself!

This is as neat as it managed to get inside. Far from perfect, but had a undamaged dash and doorcards, a carpet out of another R31 I had, an N14 Pulsar SSS wheel, and decent standard Silhouette seats. Wasn't too bad really. 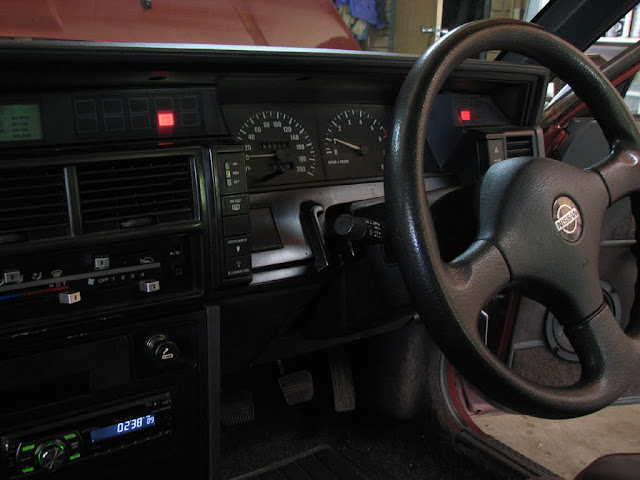 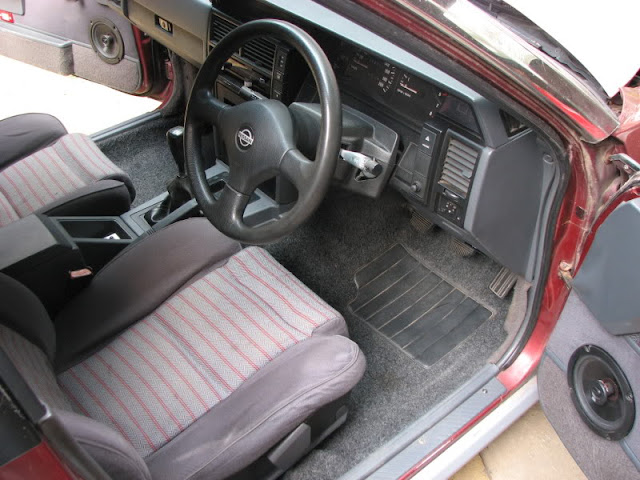 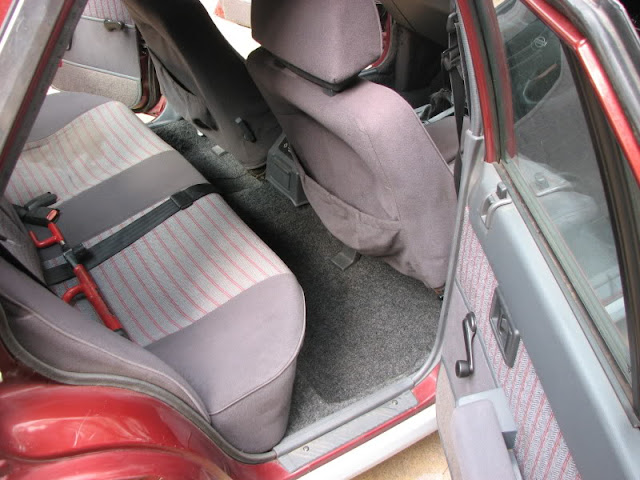 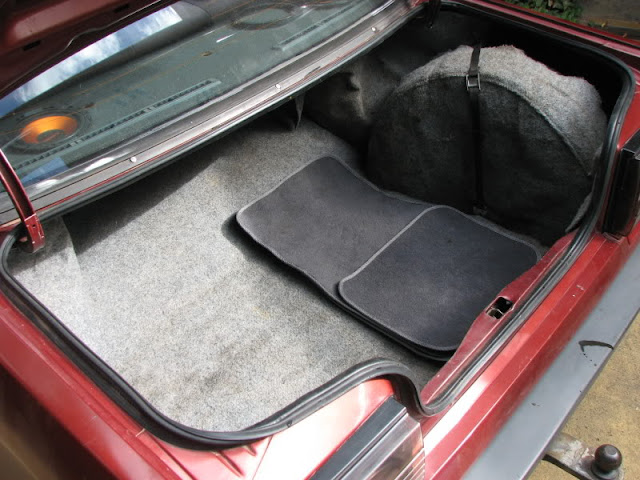 After a bit of work doing basic boring roadworthy things, this car amazingly passed a roadworthy inspection, and then got registered! 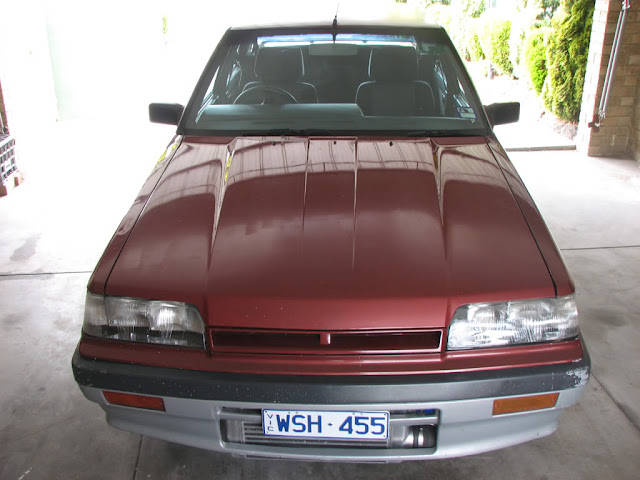 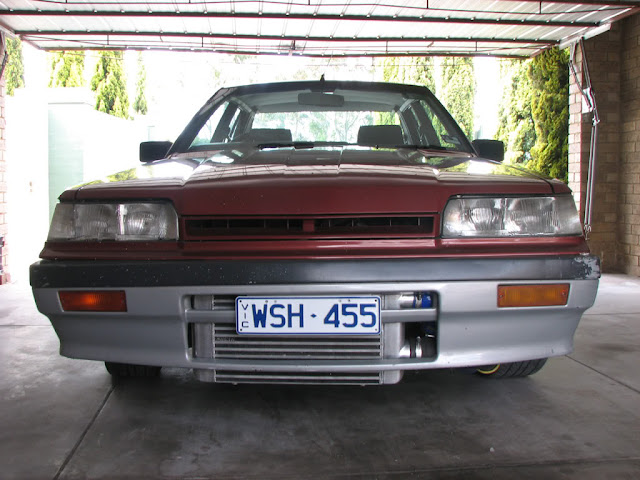 As soon as that was out of the way, it got its first nugget-spec Turbo setup!
The classic RB30E+T combination. Standard RB30ET T3 Turbo manifold, 3" Turbo back dump and exhaust, standard injectors, standard ecu, and a horriffic intercooler setup assembled out of bits that were lying around.
The airflow meter is then moved from the intake to the cold side of the cooler piping, and a open-ended straight pipe added right on the front of the Turbo.
The whole point of this is to just get it to 'dose'. Seriously.. just to make a ton of induction noise, and flutter like a chipmunk when the throttle is shut abruptly. Silly, but hilarious. 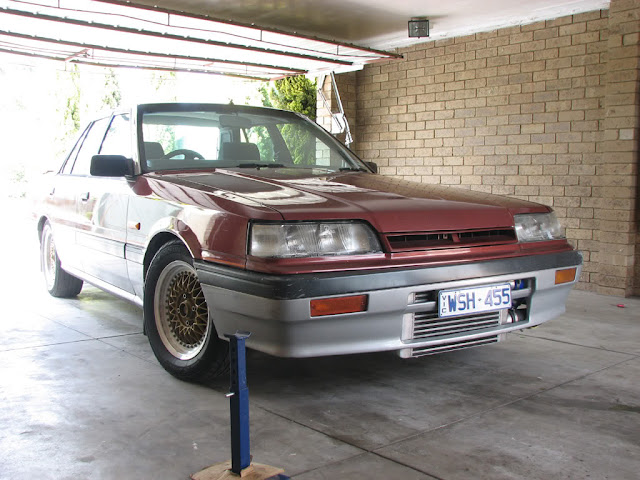 Back section of the front bumper hastily cut out, and bumper struggling to fit over the truly terribly mounted turn-flow Intercooler.


I got a set of secondhand Pedders shocks and springs, swapped the LSD Diff out for a minispool, and a set of (in hindsight, absolutely spot-on) Volk Racing Superfine mesh wheels.

And there it was: 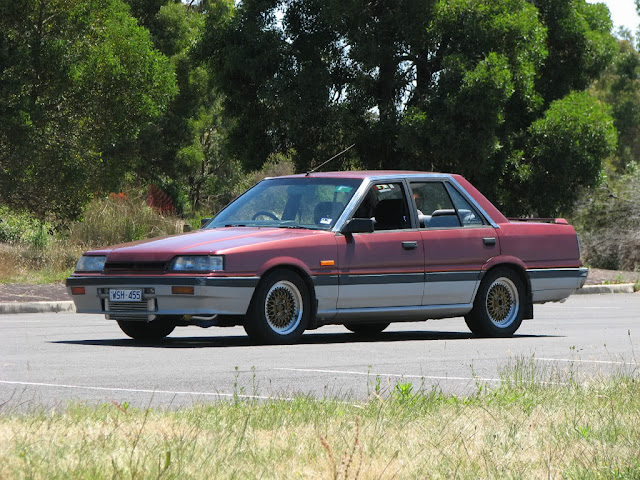 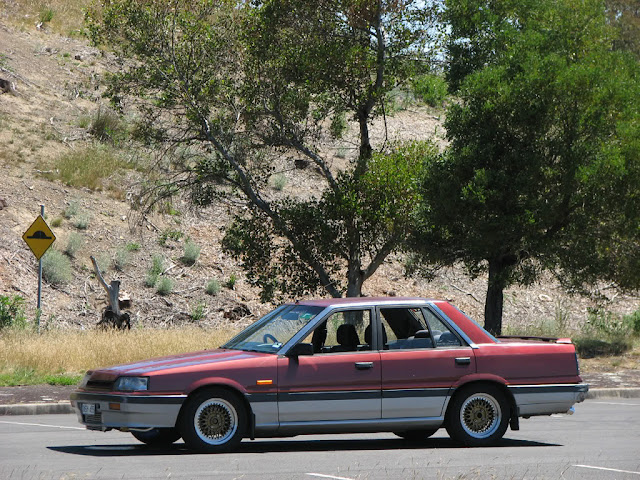 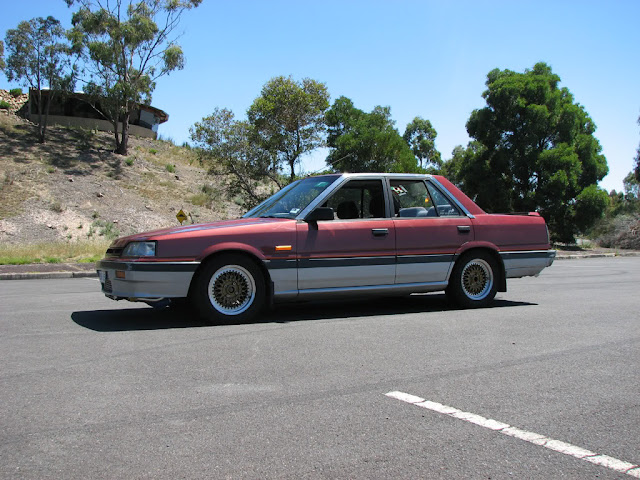 Make no mistake - it was still a brutally rough car overall; but remember it was all built for a bit of a laugh.
It actually managed to look pretty damn cool though..! 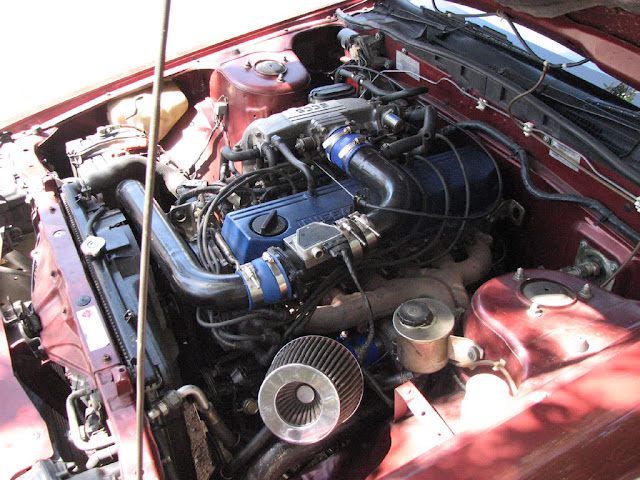 After a while, the original RB30E+T cried enough; so a new one was sourced - and this time an RB30ET.
This came out of a dark blue S3 R31 Silhouette, which had managed to slide into a pole shortly after this engine was built.
Was a bloody bargain at the time, as it had not long before been fully rebuilt. At the same time a much much neater inter-cooler setup went in, and VL Turbo (originally fitted with a RB30ET) ECU and injectors.

The new front bumper went on with the new intercooler too.. and actually fit this time! 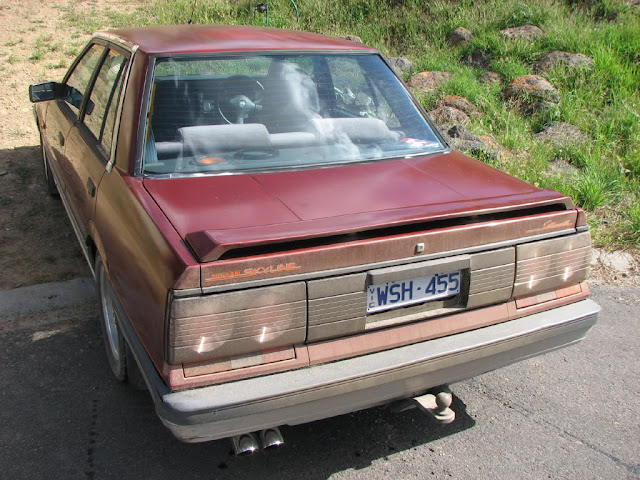 Despite the work, the car never really had a home. I had other cars, and no damn room.
It spent a lot its time on the street, in front of a mates house, and later in storage. 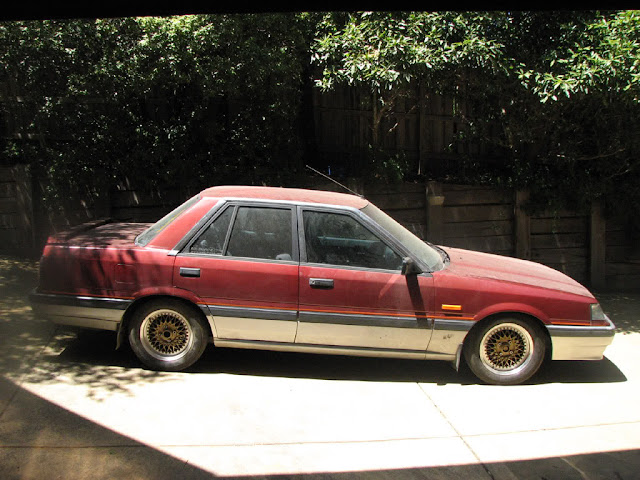 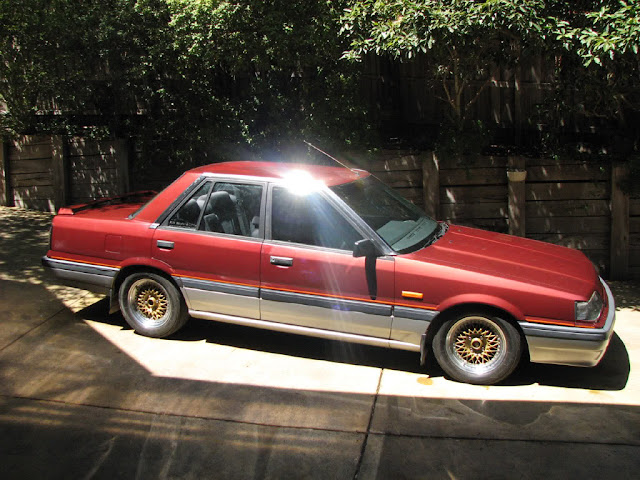 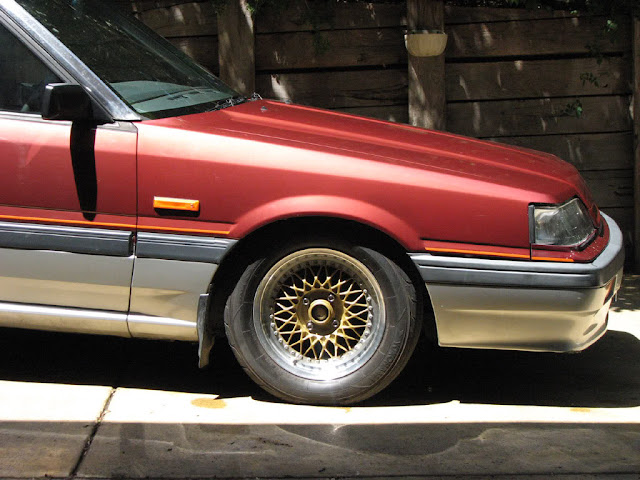 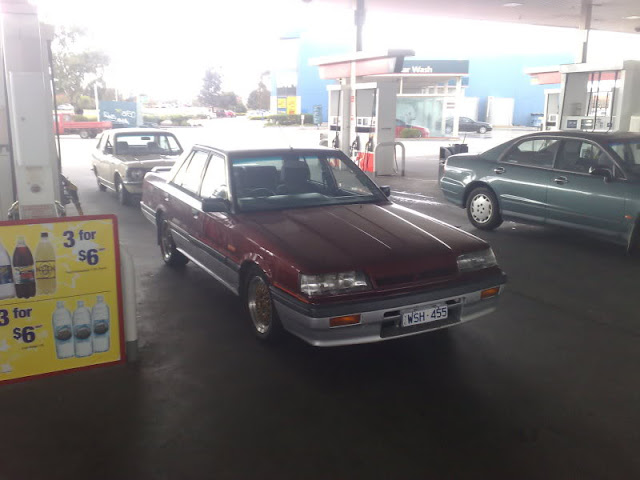 I finally ended up selling it to a friend, who continued to work on it, and used it as his daily for quite a while!
In later days it actually had a full set of S13 coilovers, a modified R33 GTR gearbox, and the T3 turbo rebuilt with T4 internals. It moved along nicely.

When it then came time to sell again, it came up against a classic problem with cars like this: they're just worth much more in parts than complete.

It was parted out, and the body went to the wreckers.


was a bit of a shame, as i always liked this car. I had wanted to buy it back.. but just didn't have the time for it. The reality was that it was near-dead and ready for the wreckers years before, and i had actually just given it one more shot. Its amazing it had ever managed to get back on the road.. but it just didn't last.


On top of my love of '31's, this car left me with a huge soft-spot for the S3 Silhouette in particular. Just love them.