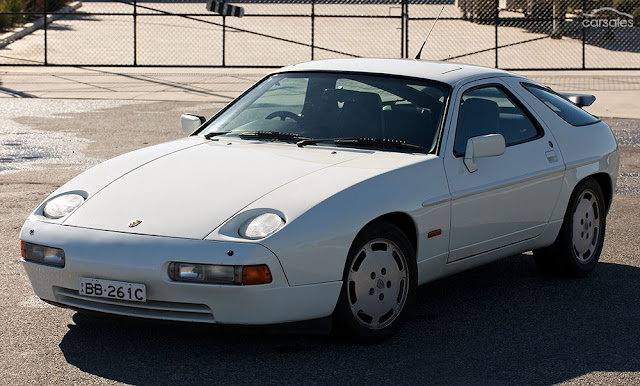 Through what seems like almost frantic levels of 911 enthusiasm over the last couple years, the old 928 has amazingly managed to somehow dodge much (if any) attention.
I'd almost say (951)944 Turbo's or solid 968/Clubsports have managed to get more of a kick in interest levels.. but the 928.. why no love?
I know I personally have always tried to be wise - to keep my distance from these. They are an absolute deferred-maintenance MACHINE.. like a secondhand V12 7series, an S-class.. A8.. whatever; cars bought by people who couldn't afford to own them. Maintenance for a complex, high-end car, doesn't magically get cheaper as the car gets cheaper; replacing those self-levelling struts on your 7series is a drop in the ocean when you've just paid a couple hundred grand for it, but 8years later when Steve-o happens to pick it up from CarCity for $5000 - not so much!

So what if you can manage to get onto one of these that has just been cared for.. that has had work done when it was needed.. even a little preventative maintenance? Surely it can't be too much worse than pulling a lesser car back from the brink..

Regardless of all this, I'm sure anyone can appreciate how cool these actually are! Technically interesting, and one of the most thorough cars Porsche ever engineered. Through an almost 20year production run, these were the absolute best Porsche could offer.. and sat right at the top of the range. Where else can you get such quality engineering, from an amazing manufacturer, for so little coin?

...I think I might waffle-on too much here.. got a million things in my damn head I'm trying to say..

SO...
Released late 70's.. impressively rust resistant gal body with all aluminium panels, rear transaxle, and front mounted alloy 4.5litre V8. This later became 4.7litres for the S, then 5litres, then a major facelift and gaining 4valve/cyl as the S4, yada yada.. special variants spinning off occasionally.. GT manuals etc, before finally growing to 5.4litres in the early 90's GTS.. and wrapping up production in 1995.

Which brings me back to focusing on one particular variant/era.. the later 80's, post-facelift, S4. My personal pick of the bunch for the nice compromise between age, spec, and price.
Rough early ones are always around for nothing, and there seems to be a couple late ones (understandably) asking top-dollar.. but the late 80's S4, with the smooth bumpers and 32valve 5.0litre.. that's my sweet spot.
I always keep a casual eye on 928's on the market - there's not a huge amount in Australia, and they move slow.. so its not particularly difficult to keep on top of - and happened to notice a couple decent ones available recently.. so here I am now.. fresh on my mind to rave on about them.

Here are two that are currently on the market. Australian delivered, largely original, and (IMPORTANTLY) seem loved/cared for. 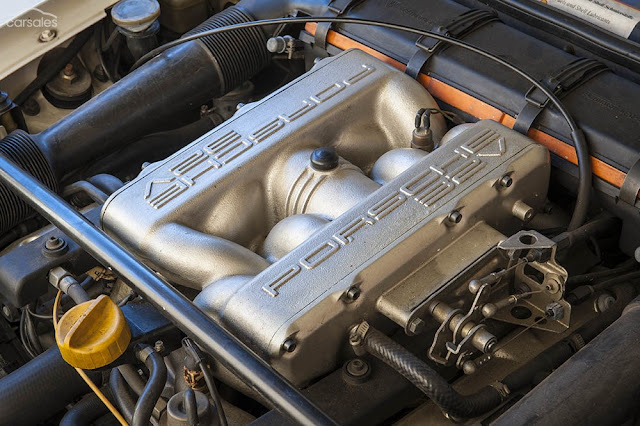 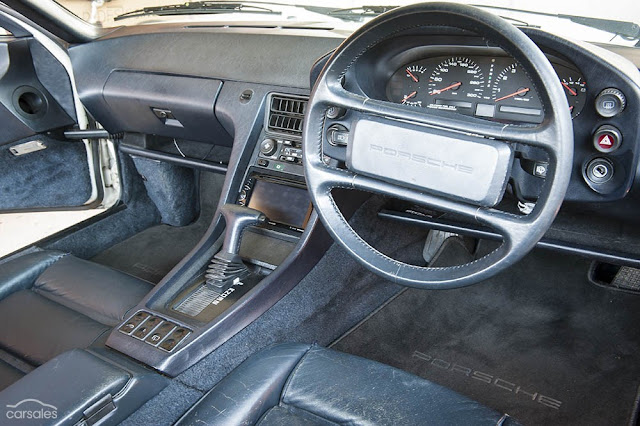 This white-on-blue 1988 seems particularly nice. Work done through the current ownership, suggesting the owner cared to keep it at 100% - and it sure looks neat! 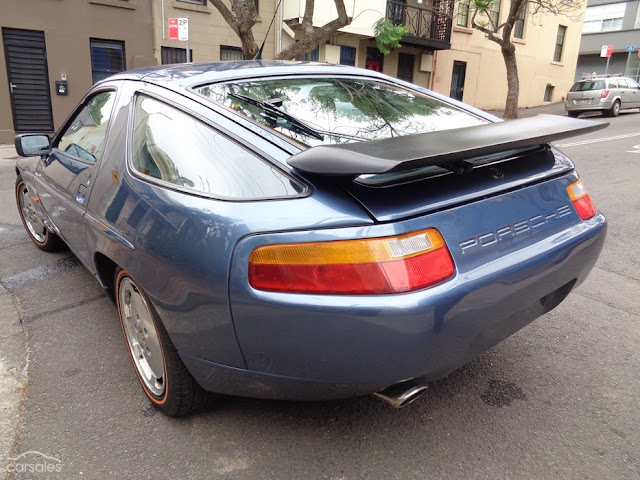 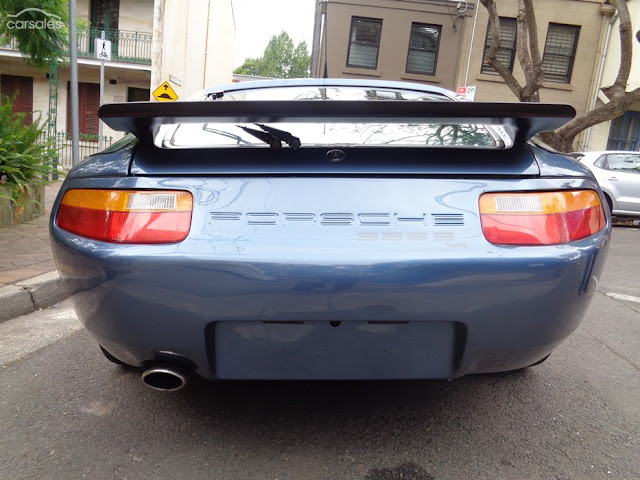 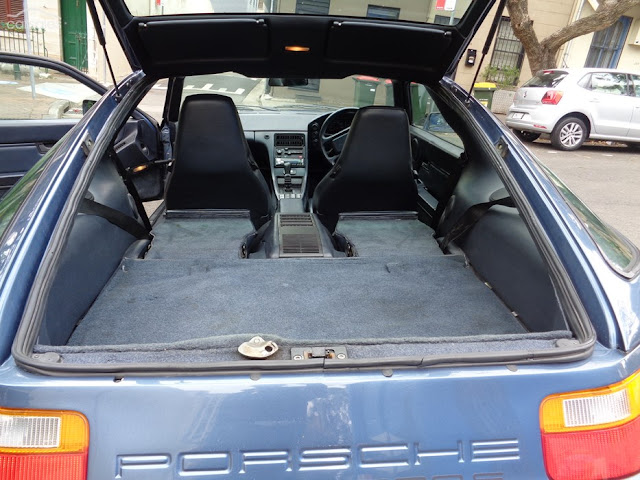 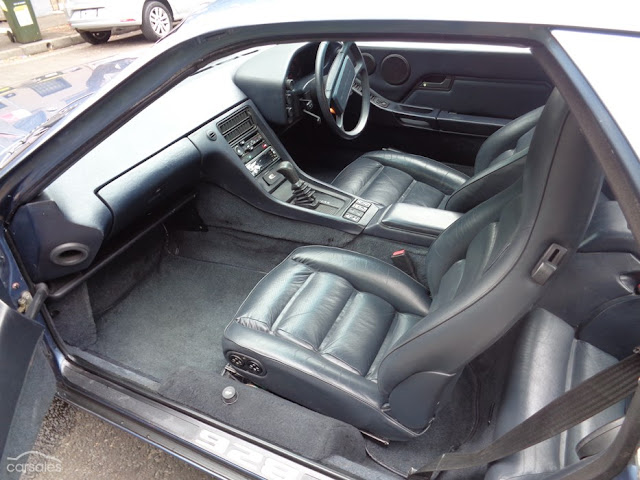 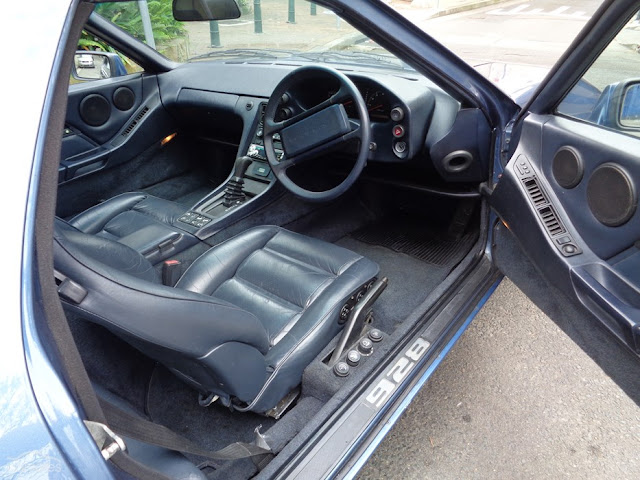 ...also a 1988 S4, but this time blue-on-blue. Overlooking the somewhat strange whitewalls, this ALSO looks in fantastic shape.
Having a hard time choosing which colourway I like more though..!

Cracked out the original brochures for reference.. 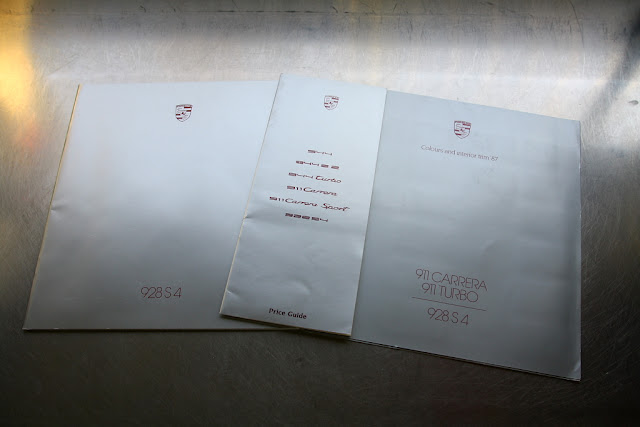 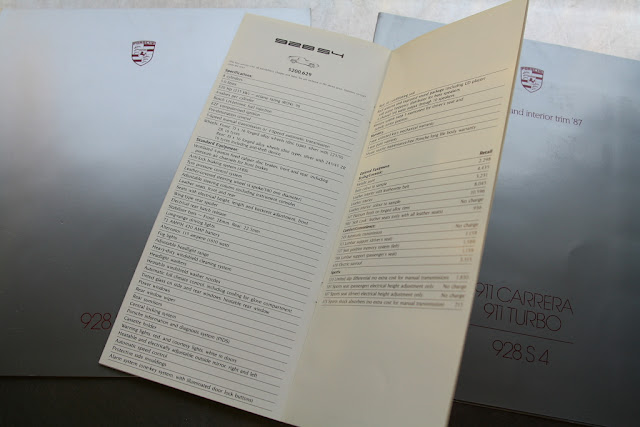 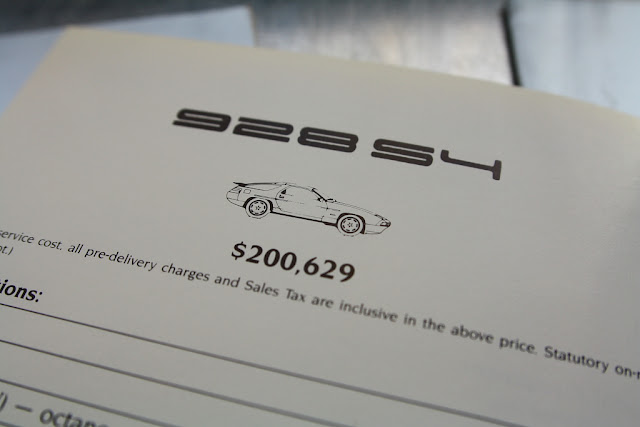 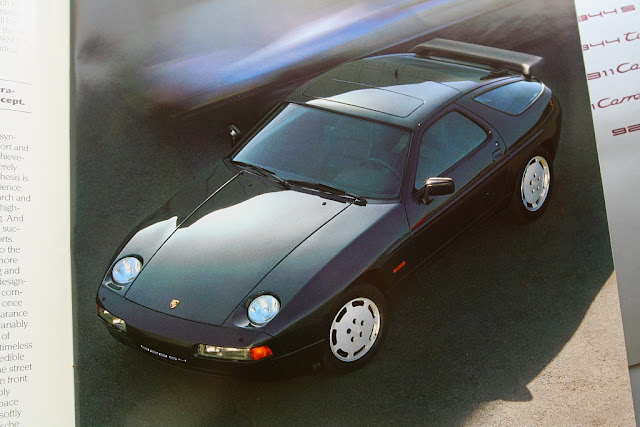 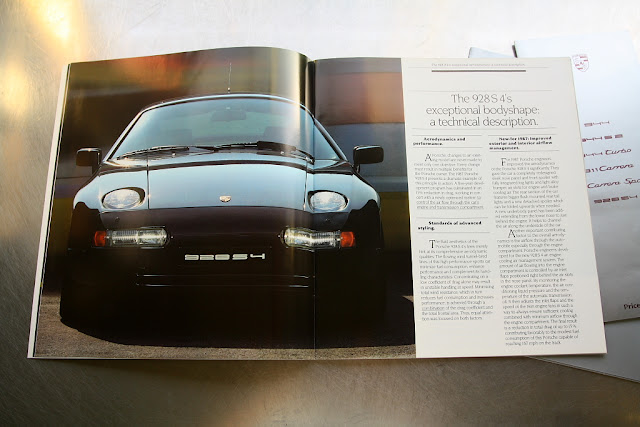 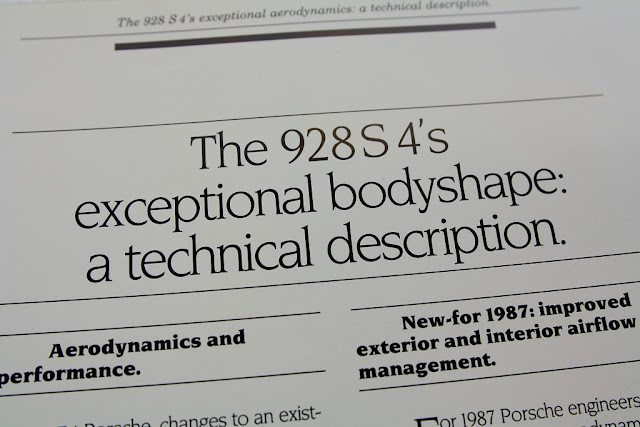 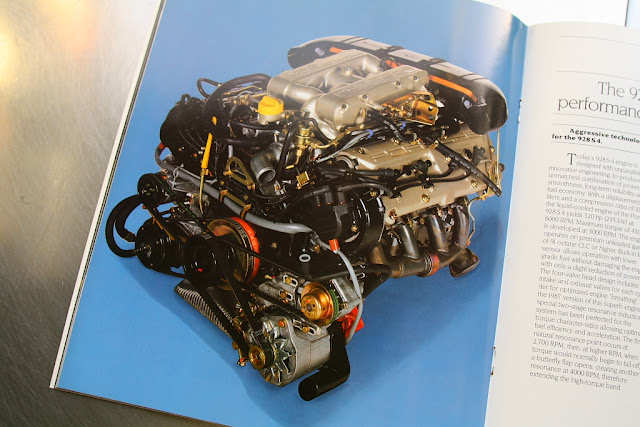 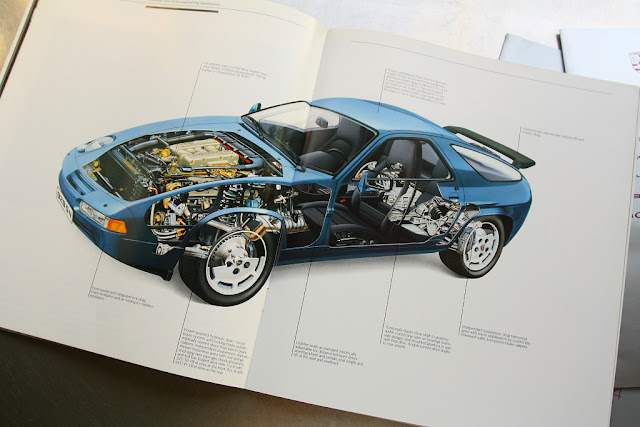 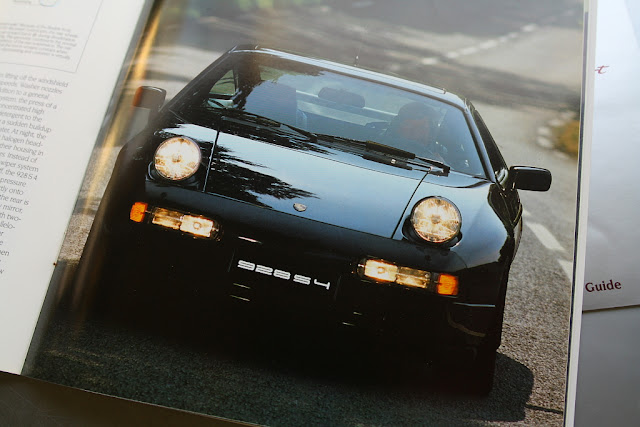 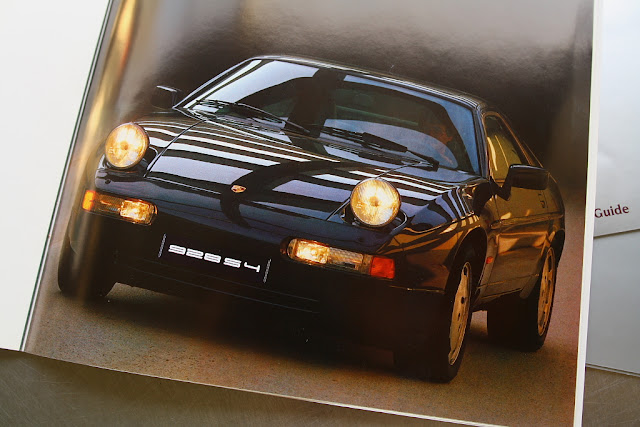 ..love seeing these with the headlights up! 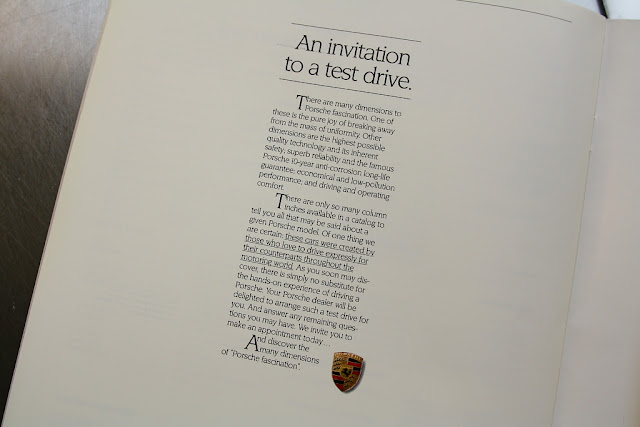 The brochure car does look damn sharp in black... and hey, there just happens to be another Aus-delivered 1988 S4 in black-on-black for sale just one suburb over...