The SR5 was the upper-spec model (a model spec still used by Toyota today), and being an Australian car, was powered by the anemic 3Y Petrol engine - a 2litre carby 4cylinder that struggled to make 90hp when new.

I saw this for sale recently out the front of a trade-in wholesaler, and almost snapped my neck when i saw it! You just never see these around here, let alone for sale.

..so now its mine. Totally worth it. 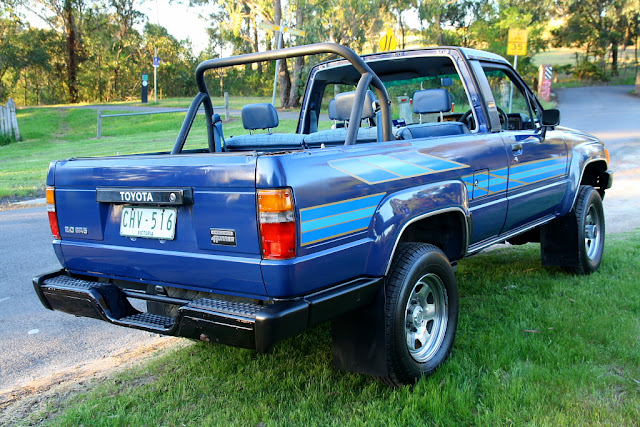 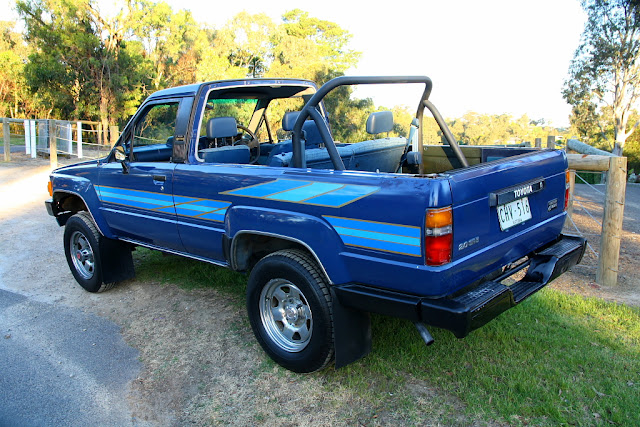 The large fibreglass rear section has been removed in these photos. Partly because it is bloody epic with it off, but more-so as I was sussing out some rust issues. 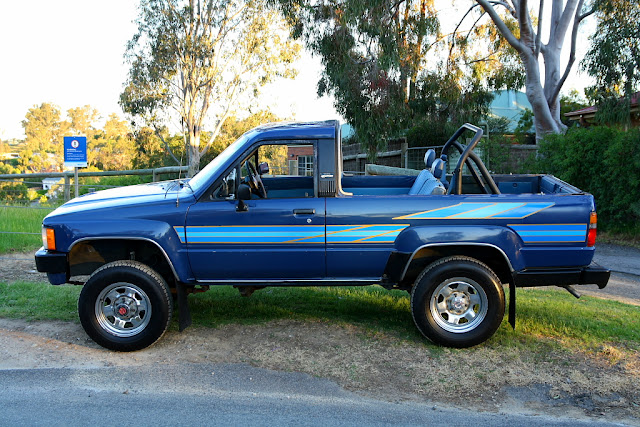 The original Australian-spec SR5 stripes, which look fantastic. Wild decals like these really help make 80's utes/trucks/vans look as cool as they do.. 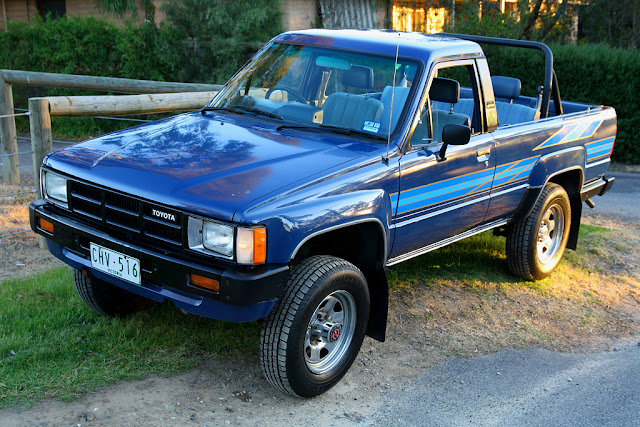 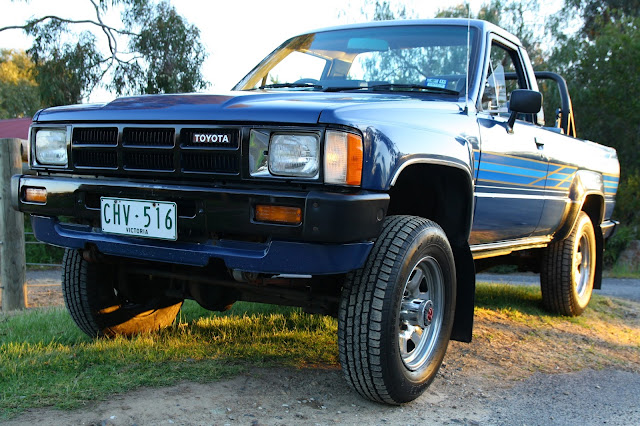 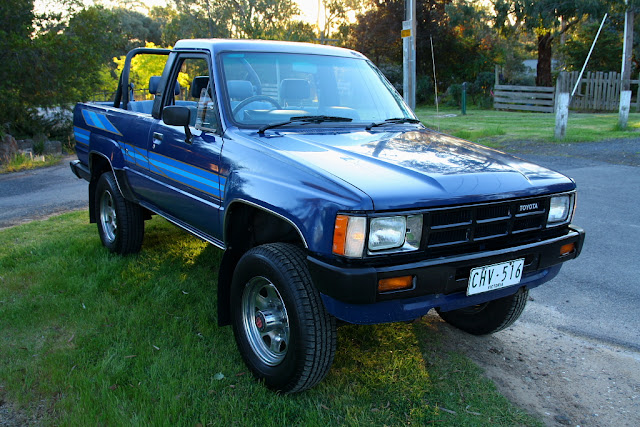 All original around here, from the worn paint, Toyota mudflaps, and black grille/bumper/mirrors etc. The US models had the option of a chrome package on the exterior, in which most of these black parts were chrome plated. I'll go down that path if I do decide to go all-out on this.. 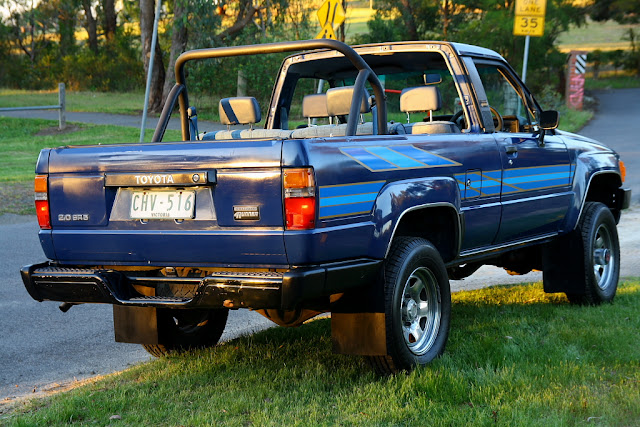 These are the original plates it got when delivered in October 1984. It has been a local car since brand new, and has been continuously registered for 29years.. 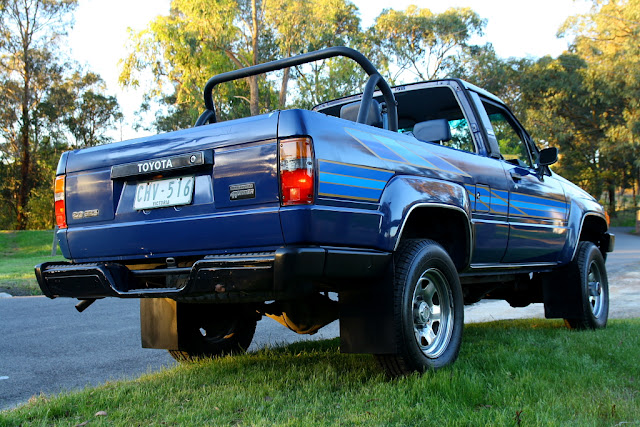 This is the height it sits at with sagged stock leaf springs. I love it - particularly the height of the sills and short front overhang. 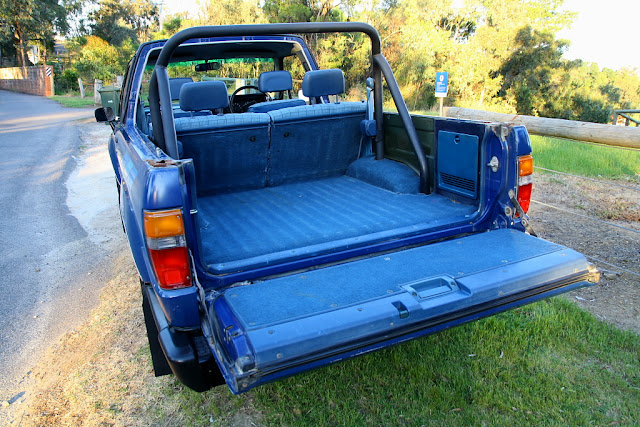 The rust around the canopy area is odd, particularly for what is otherwise a very rust-free car. Hopefully not too painful to fix.. 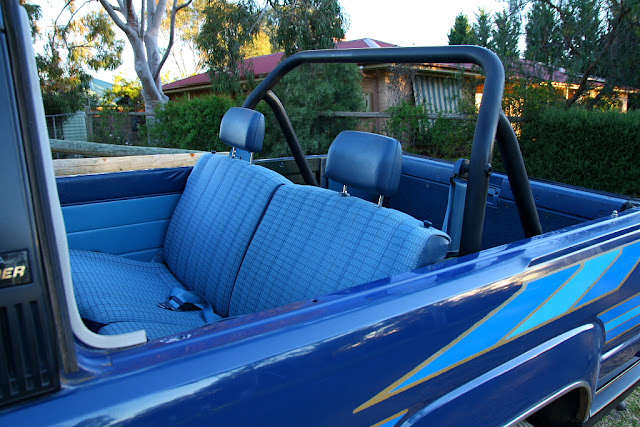 Factory rollbar, which also happens to be there to support the rear seatbelts.
Obviously the roof hasn't spent too much time removed, as the rear seats are basically unmarked. 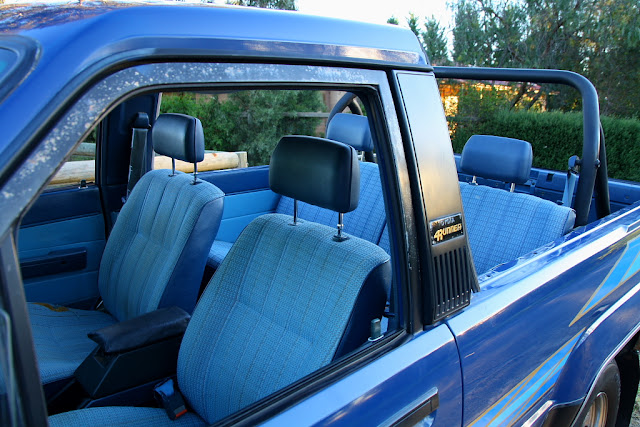 ..The front seats, not so much. You can see the colour difference between them here. 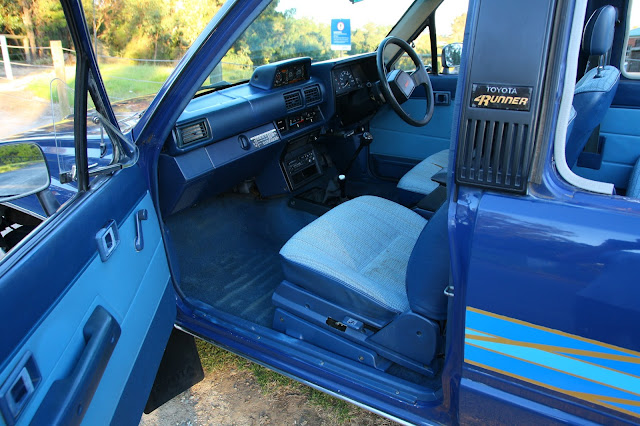 Its just age, as the car clearly hasn't been abused.
Everything here is just gradually worn out over time.. 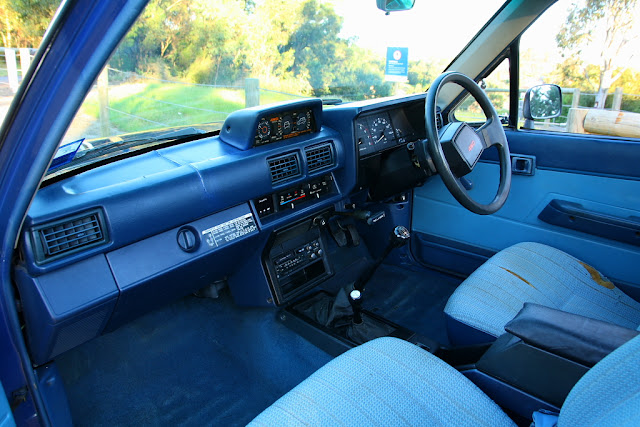 Great big crack in the dash, but not usual for the model.
All original here, from the 4WD shifter instructions and worn out gear boot, to the 4-speaker Toyota tapedeck.
The pod on the dash includes an altimeter... like an aeroplane.. which is brilliant. 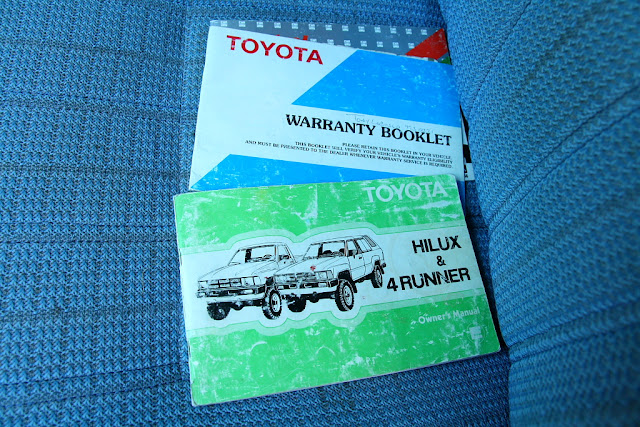 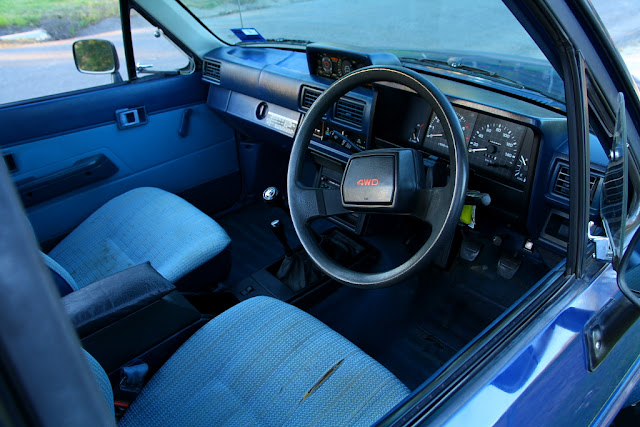 I love the two-spoke wheel and grid over the cluster... 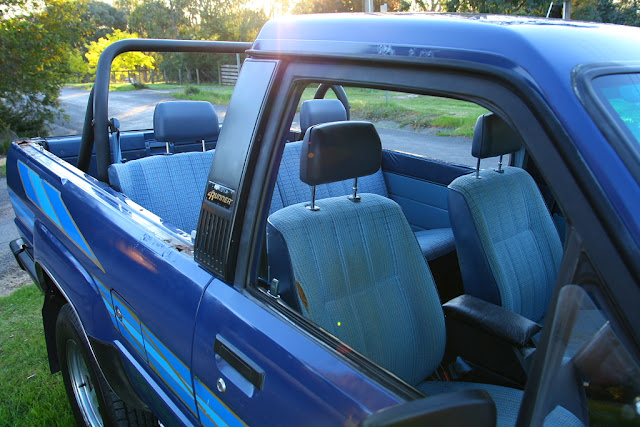 While the rust on the roof gutter isn't unusual, its more of that damn canopy rust! The dry paint is the previous owners efforts at tidying the rust areas up. No bog, just pressurepack blown over the top.. and anything nearby... 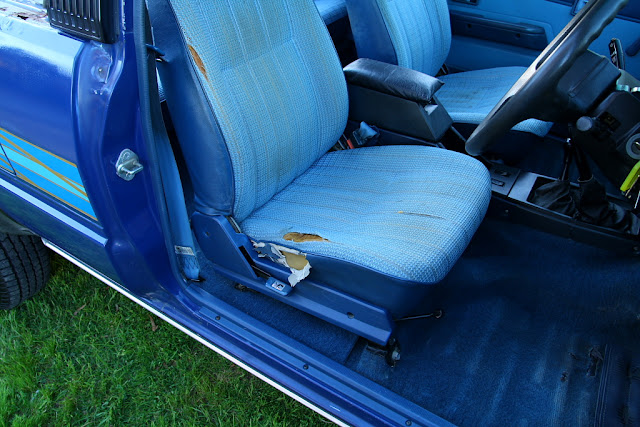 Holes in the seats and carpet, but somehow impressively clean. 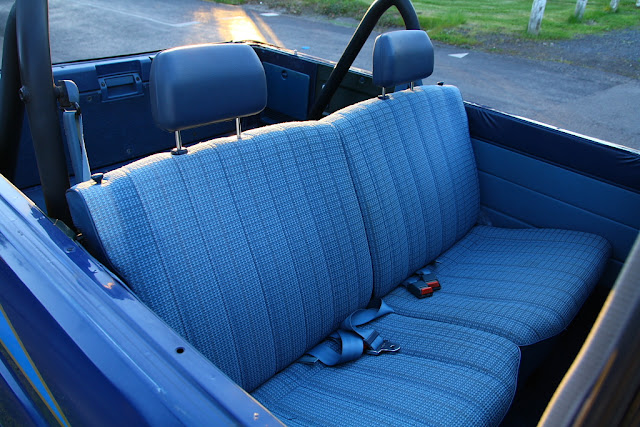 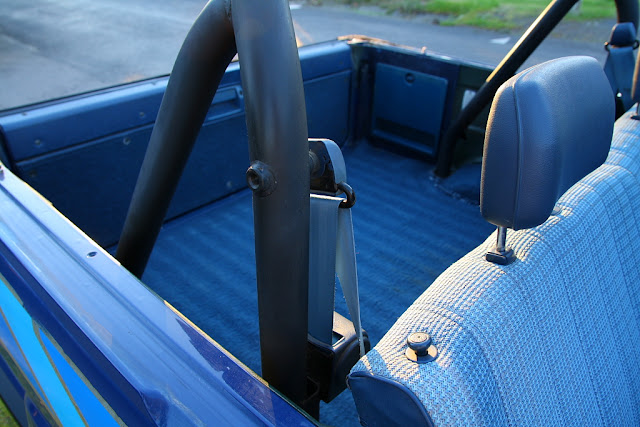 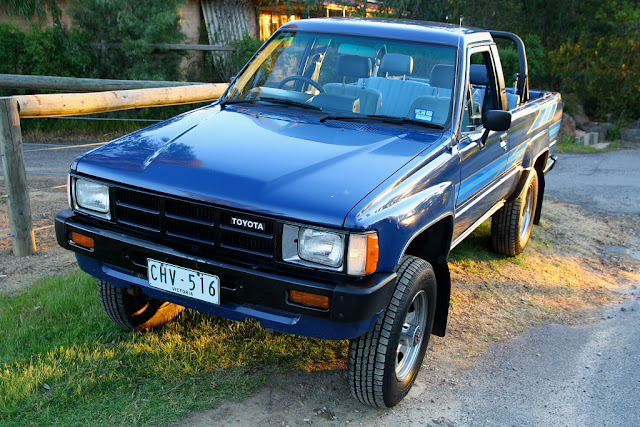 ..And back to the front.

I really love it overall. Not only as a tidy original car, but its a great colour combination (I love the blue on blue), and would look great restored.
I plan to sort out as minimal as I can to get it road-legal, and then drive it largely as-is; But I can definitely see myself buckling before long, taking it off the road to restore. We'll see...