Jokes fired wide in a delicate attempt to skirt insensitivity, as it's time for a closer look at the sports-styled variation of Ford Australia's large-car offering through the 1980s: the Falcon 'S' Pack, here based on the 1982-1984 XE Falcon GL specifically.

Kicking off with some three year old Instagram posts and a scan dragged off the interwebs, recycled and repackaged with a photoset from the slightly-shallower depths of my phone's absurdly deep Camera Roll, rinsed out to share in May 2019. You'd never know. 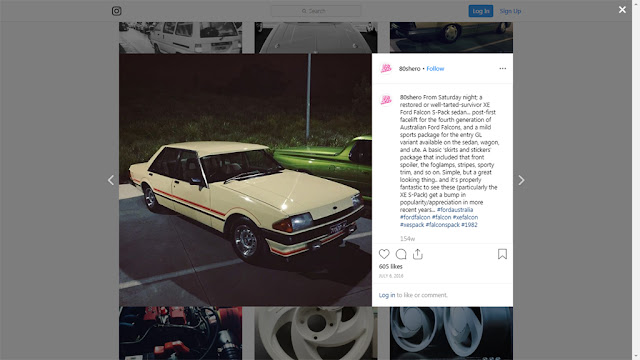 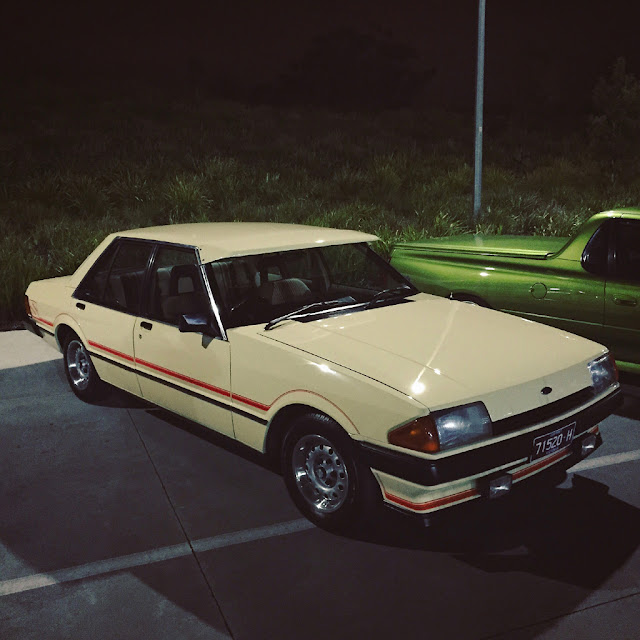 "From Saturday night; a restored or well-tarted-survivor XE Ford Falcon S-Pack sedan... post-first facelift for the fourth generation of Australian Ford Falcons, and a mild sports package for the entry GL variant available on the sedan, wagon, and ute. A basic 'skirts and stickers' package that included that front spoiler, the foglamps, stripes, sporty trim, and so on. Simple, but a great looking thing.. and it's properly fantastic to see these (particularly the XE S-Pack) get a bump in popularity/appreciation in more recent years... #fordaustralia #fordfalcon #falcon #xefalcon #xespack #falconspack #1982" 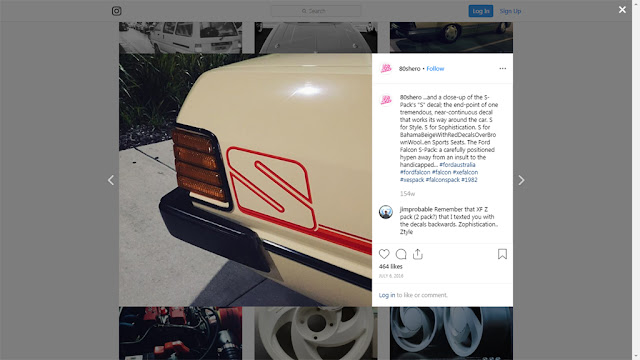 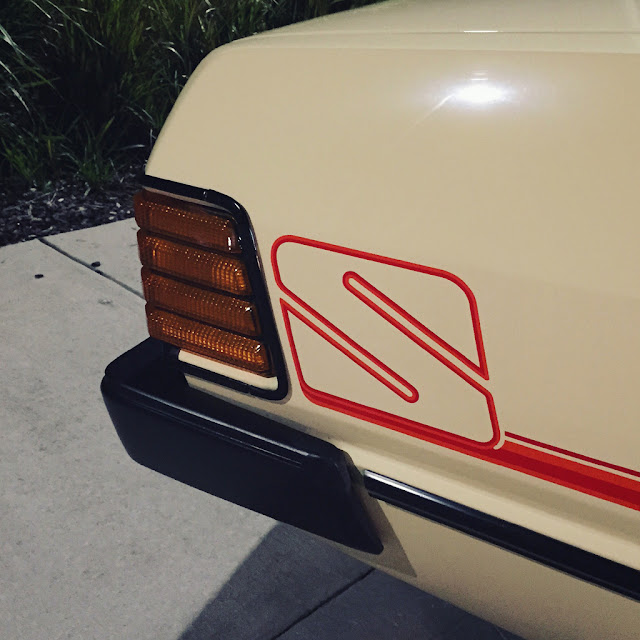 "...and a close-up of the S-Pack's "S" decal; the end-point of one tremendous, near-continuous decal that works its way around the car. S for Style. S for Sophistication. S for BahamaBeigeWithRedDecalsOverBrownWool..en Sports Seats. The Ford Falcon S-Pack: a carefully positioned hypen away from an insult to the handicapped... #fordaustralia #fordfalcon #falcon #xefalcon #xespack #falconspack #1982" 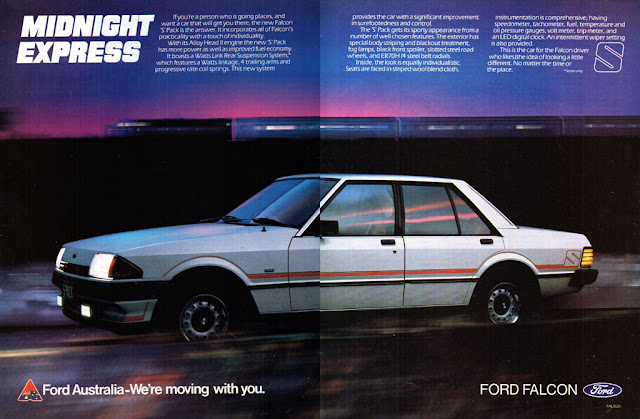 "If you're a person who is going places, and want a car that will get you there, the new Falcon 'S' Pack is the answer. It incorporates all of Falcon's practicality with a touch of individuality.
With its Alloy Head II engine the new 'S' Pack has more power as well as improved fuel economy.
It boasts a Watts Link Rear Suspension System, which features a Watts linkage, 4 trailing arms and progressive rate coil springs. This new system provides the car with a significant improvement in surefootedness and control.
The 'S'Pack gets its sporty appearance from a number of well chosen features. The exterior has special body striping and blackout treatment, fog lamps, black front spoiler, slotted steel road wheels, and ER70H14 steel belt radials.
Inside, the look is equally individualistic. Seats are faced in striped wool blend cloth, instrumentation is comprehensive; having speedometer, tachometer, fuel, temperature and oil pressure gauges, volt meter, trip meter, and an LED digital clock. An intermittent wiper setting is also provided.
This is the car for the Falcon driver who likes the idea of looking a little different. No matter the time of the place."


...and as for that photoset, how deep are we talking? Ah, well that'd be October 2017 and the Ford Performance Club of ACT's 2017 "Capital All Ford Day" in Queanbeyan NSW, where there just so happened to be a particularly spectacular example of this sporty early-eighties Ford. Tidy, complete and seemingly very original - it was hard to miss! 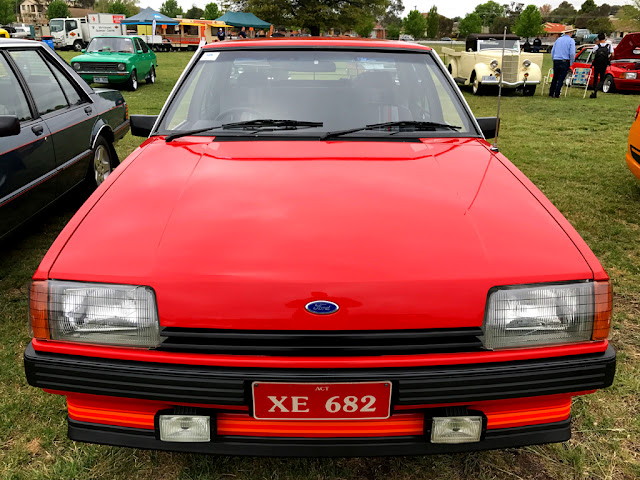 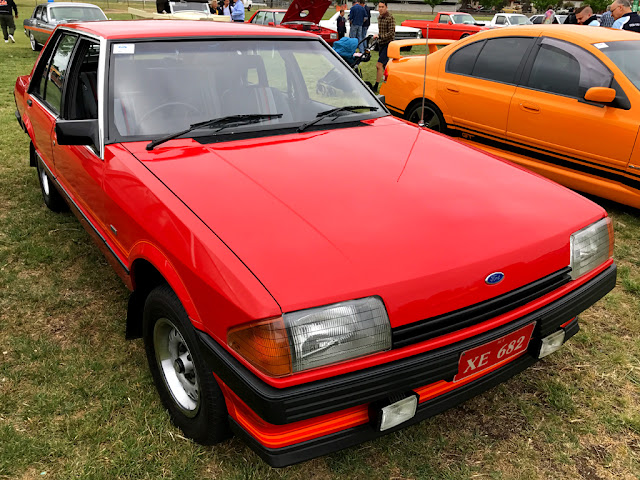 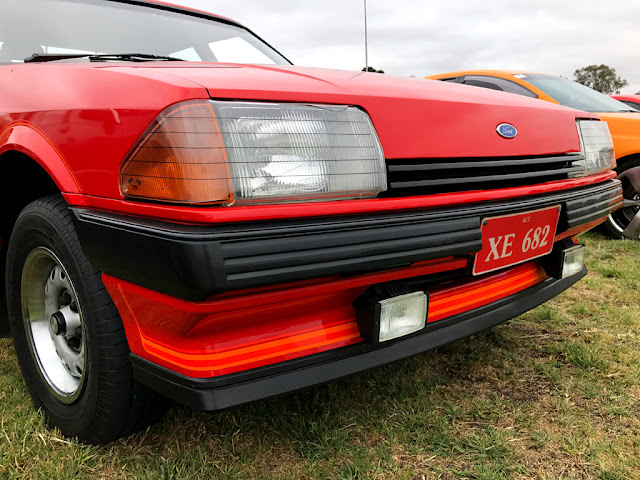 The start of the 'S' Pack's fantastic (and XE-specific) body striping that works its way around the car, along with a look at the included fog lamps and black front spoiler... 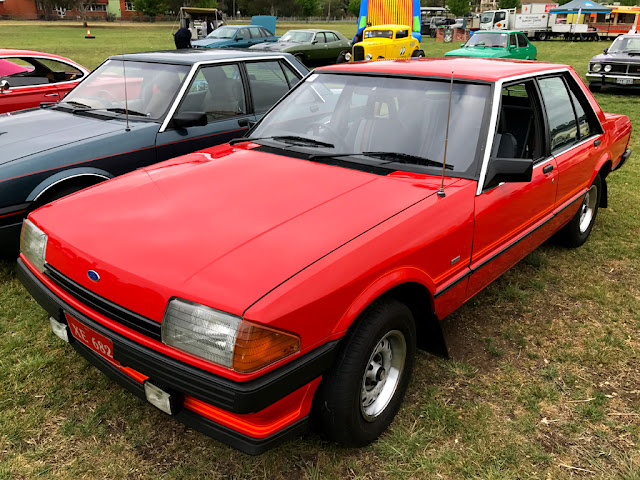 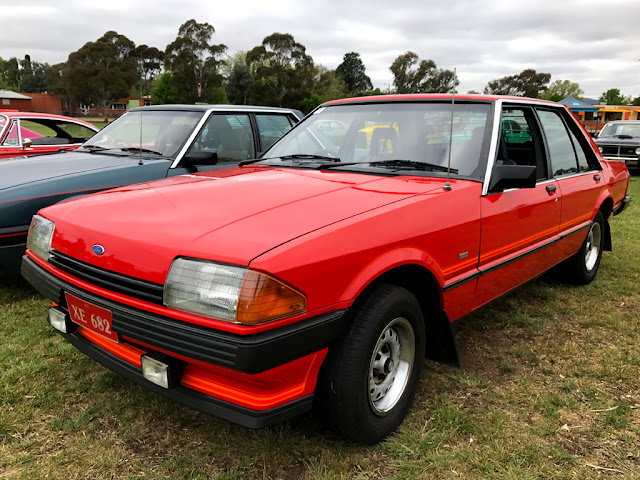 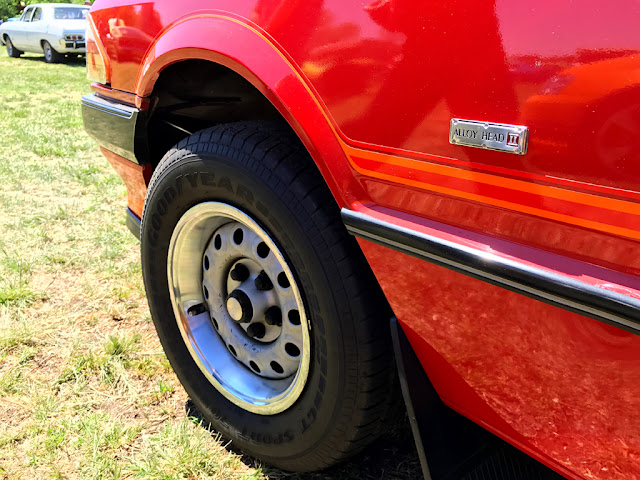 ...the slotted steel road wheels and ER70H14 (now 205/70 R14) steel belt radials.
The "ALLOY HEAD II" badge proudly refers to the then-latest 3.3 and 4.1 litre variations of a six-cylinder that traces its roots back to the Ford US Thriftpower Six twenty years earlier; the 5speed in this particular car pinning this one as the smaller of the two capacities offered at the time. 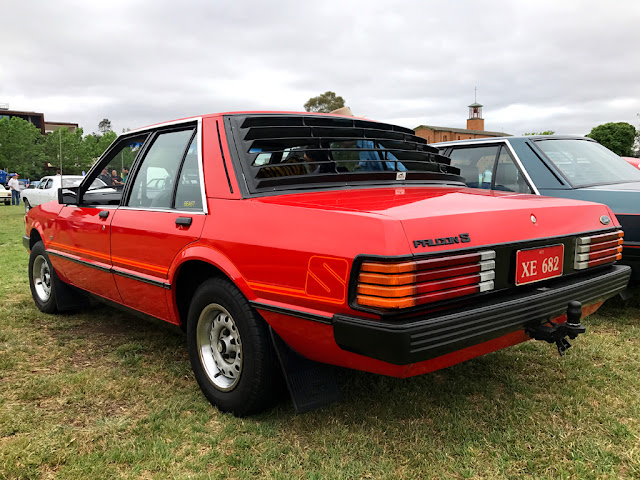 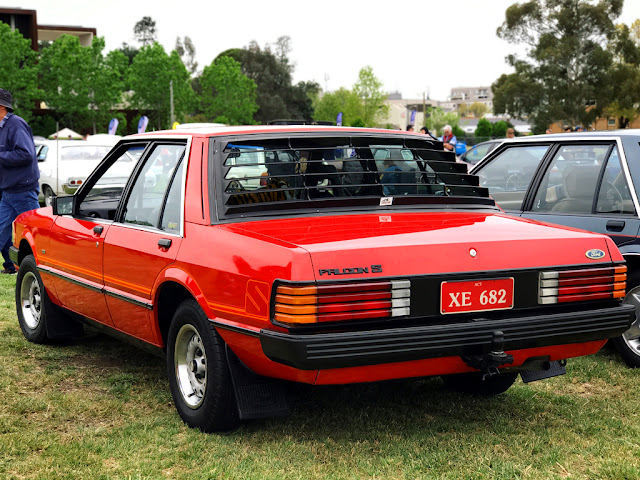 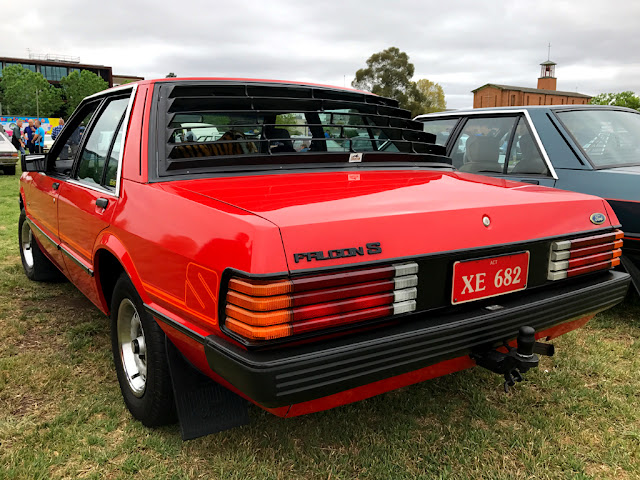 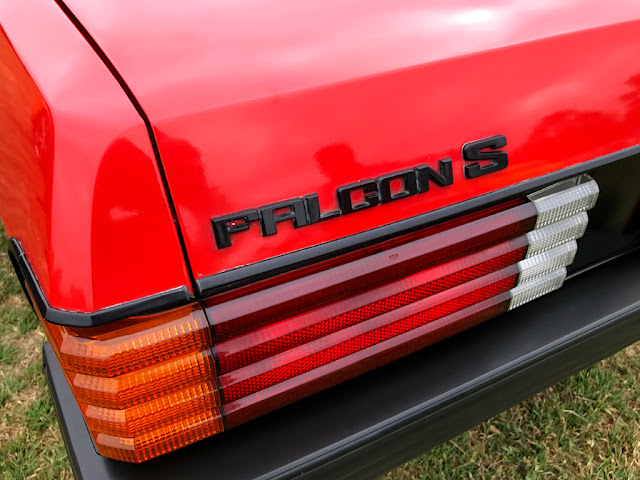 Rubbish jokes aside, that is actually another S-Pack parked to its right! 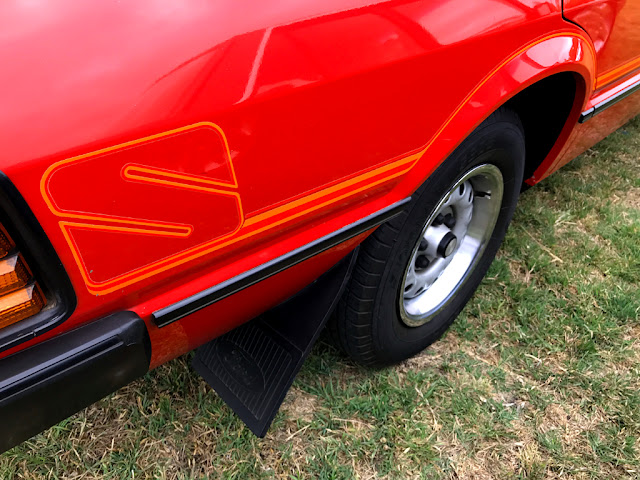 The end of the decal that has busily made its way around 11 metres of Australian Ford sheetmetal.. 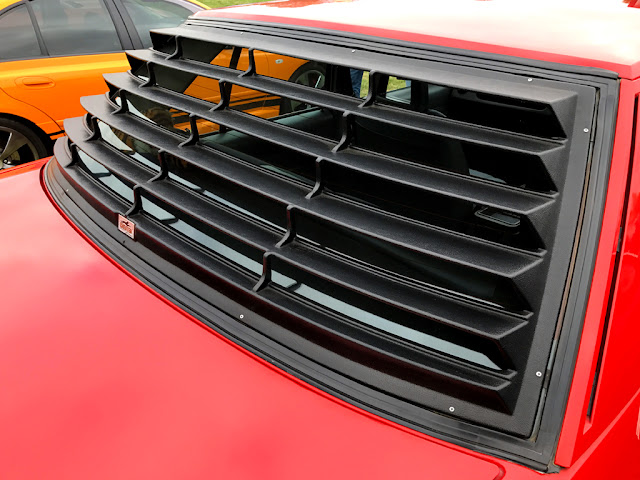 Speaking of which, this "CHEATER" (often "Aunger" brand) window louvre is a classic bit of 1980s Australiana. I sure hope someone was wise enough to hold onto all these model-specific moulds, as I have no doubt these are going to become a hot item again when the 80s/90s Aussie stuff really gets into its stride in years to come... 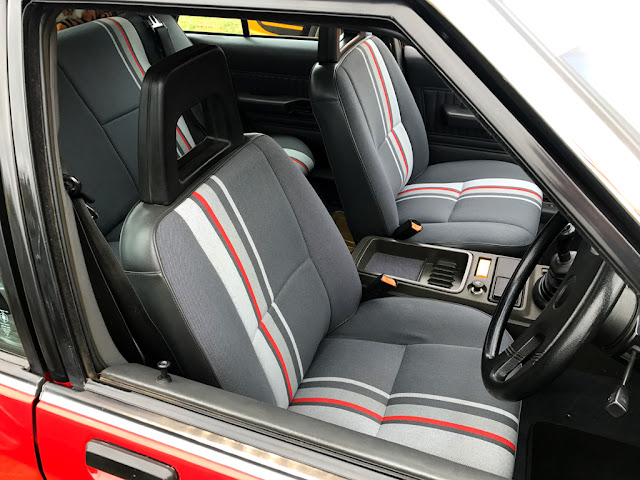 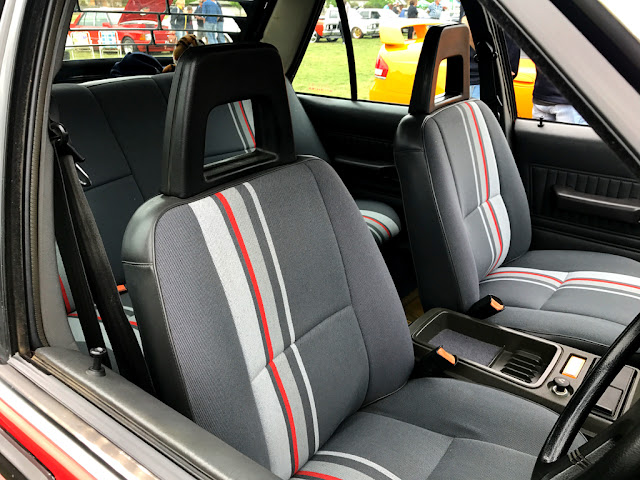 Fantastic stripe package outside, fantastic stripe detailing inside.
I know taste is subjective, but I'm honestly surprised how bloody handsome I find the entirety of the 'S' Pack inclusions on the 1982-1984 XE. A home run. Leaves me curious as to what else those involved may have had their hand in locally.. 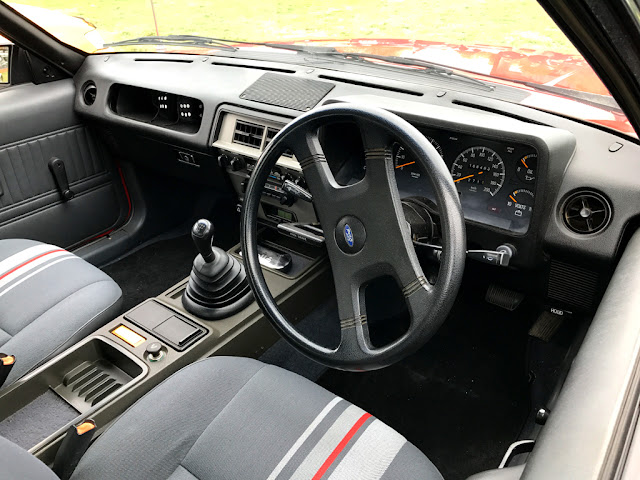 Fluffy-dice-cubes ("...I think it's time we went for a cruuuuuiiiise...") packed away for safe-keeping and instruments revealing the ~170,000km (~105,000mi) apparently traveled with great care over this Falcon's then 35 years. An absolute credit to its owner/s.

All in all, a rare sight to see out and about these days. Sadly most were thoroughly used up and binned long ago, just as many of their late 90s and early 2000s Falcon "XR6" equivalents are having their last laps around roads today. But time goes on, numbers thin, values of the survivors increase, restorations become justifiable, and eventually.. eventually.. shining examples will find their way en masse to the middle of a sports field on a sunny Sunday afternoon. I'm excited..!