Quick round-up of the daily Instagram posts during a two-week trip to Japan May/June 2017; a random selection of vehicles I'd come across on my way from Tokyo to Osaka, Hiroshima, Kyoto and around.
I'll jump into a closer look at one or two of these shortly.. 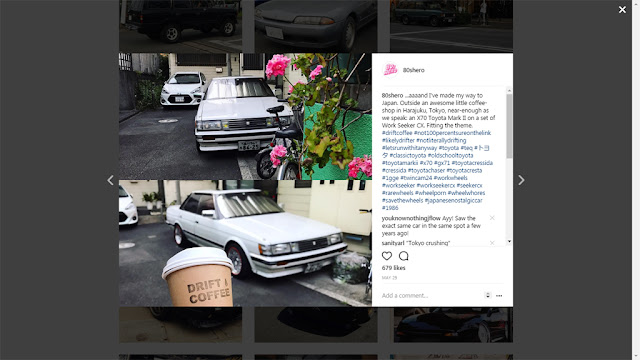 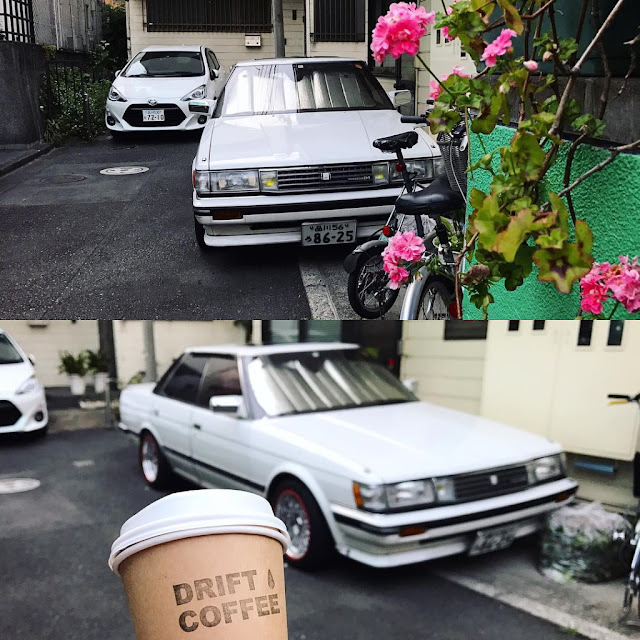 ...aaaand I've made my way to Japan. Outside an awesome little coffee-shop in Harajuku, Tokyo, near-enough as we speak: an X70 Toyota Mark II on a set of Work Seeker CX. Fitting the theme. 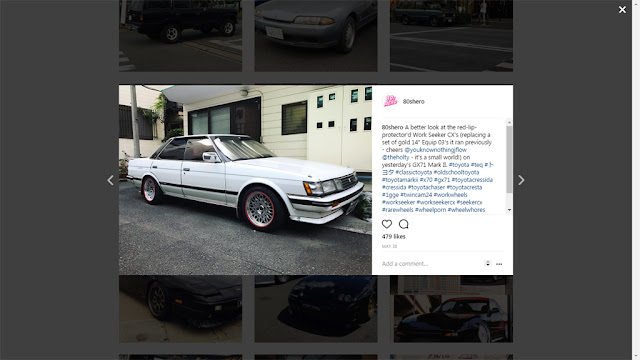 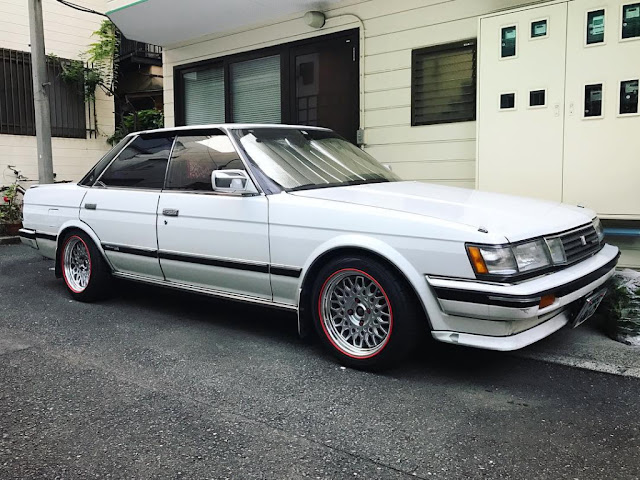 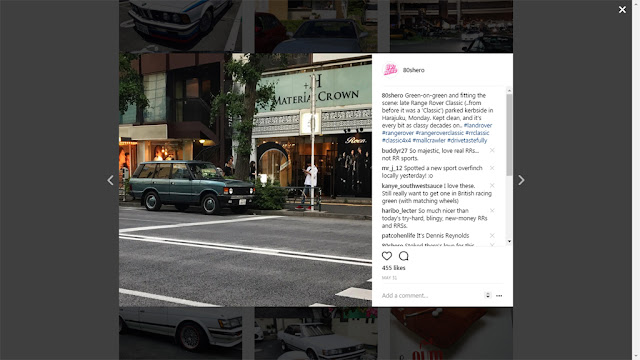 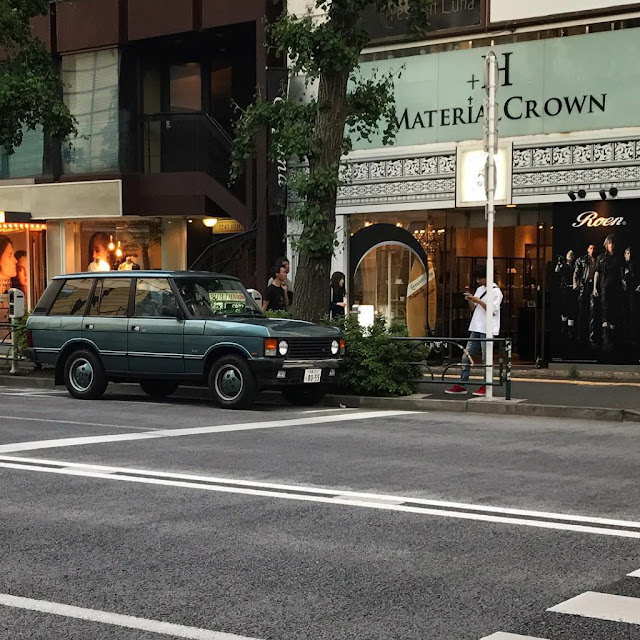 Green-on-green and fitting the scene: late Range Rover Classic (..from before it was a 'Classic') parked kerbside in Harajuku, Monday. Kept clean, and it's every bit as classy decades on.. 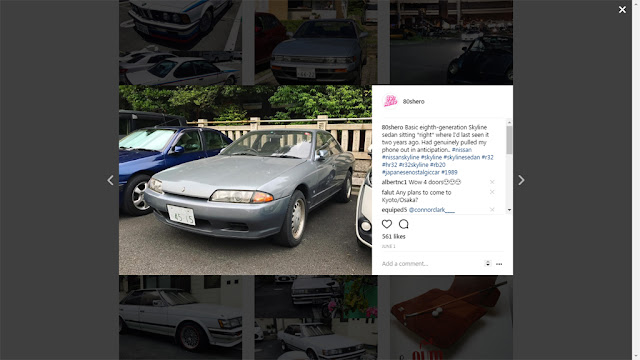 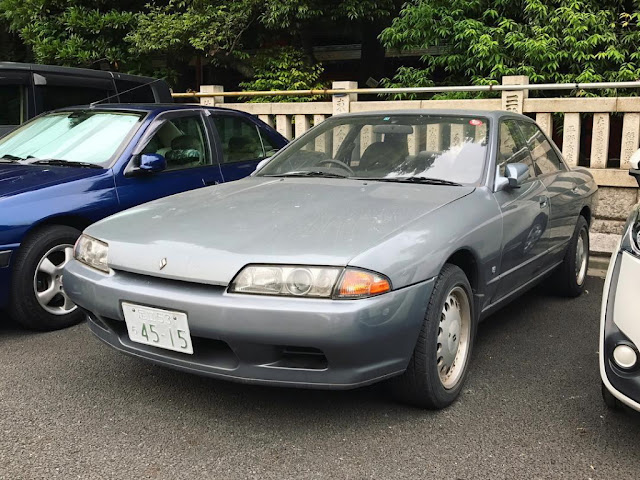 Basic eighth-generation Skyline sedan sitting *right* where I'd last seen it two years ago. Had genuinely pulled my phone out in anticipation.. 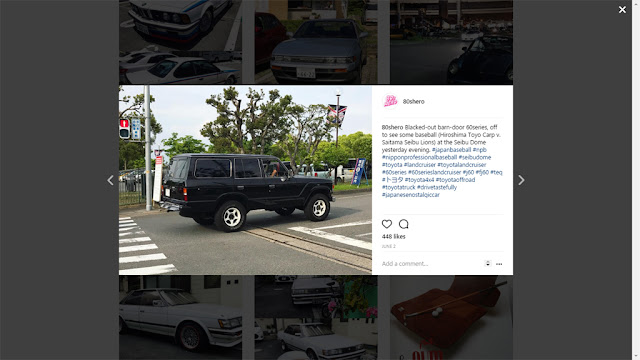 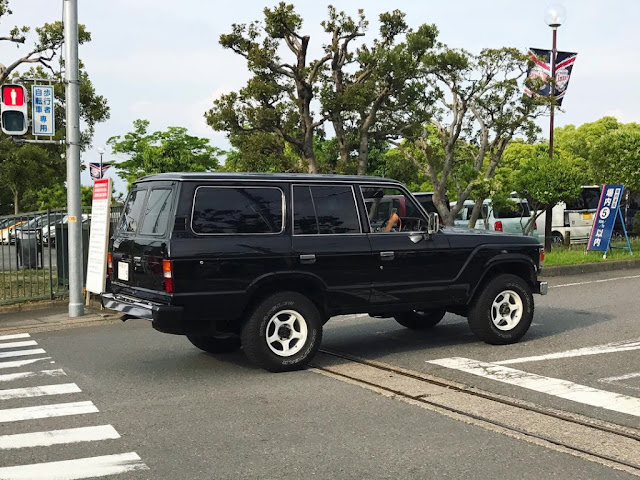 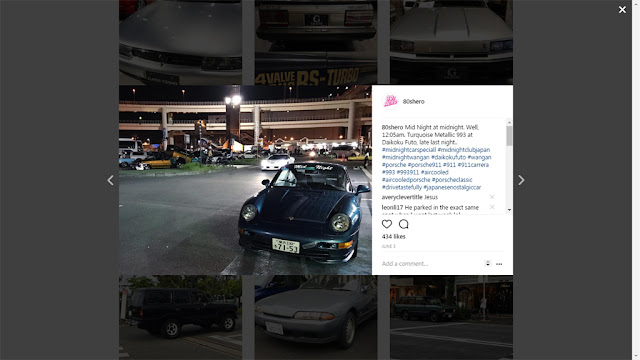 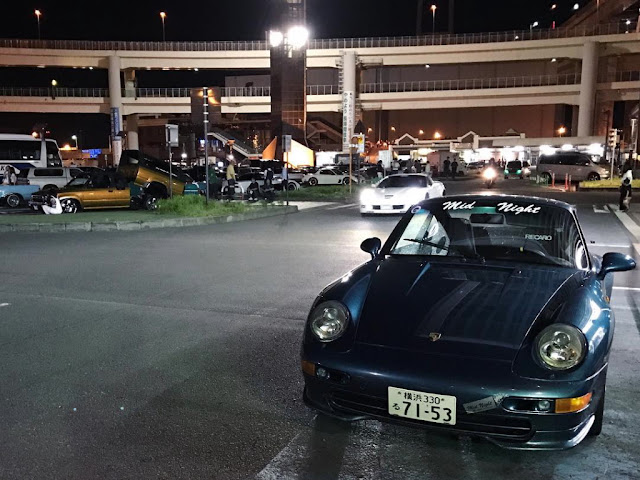 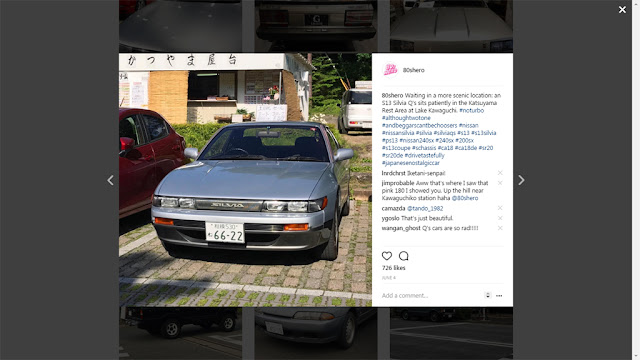 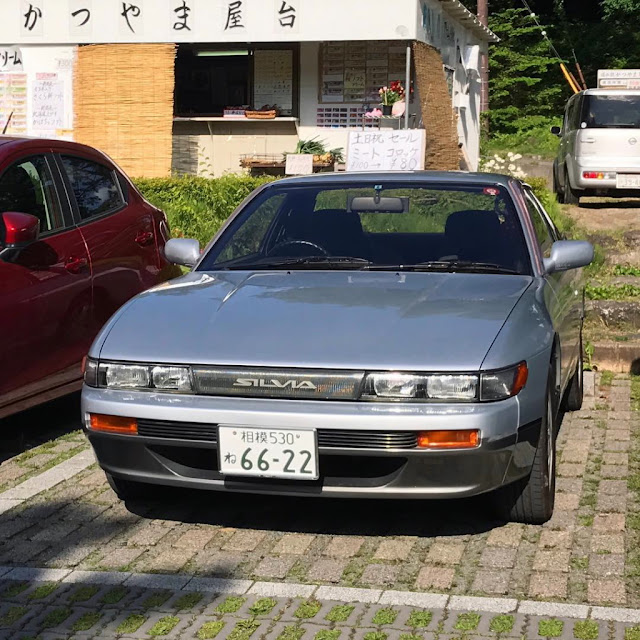 Waiting in a more scenic location: an S13 Silvia Q's sits patiently in the Katsuyama Rest Area at Lake Kawaguchi. 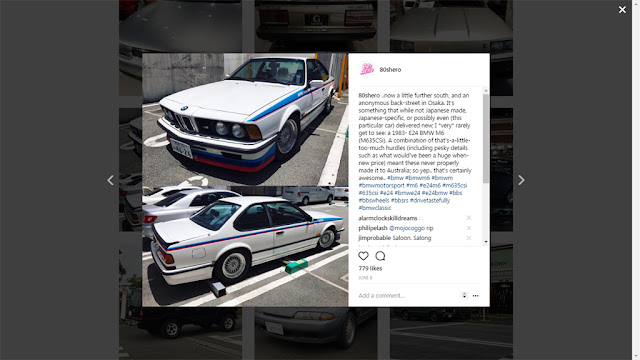 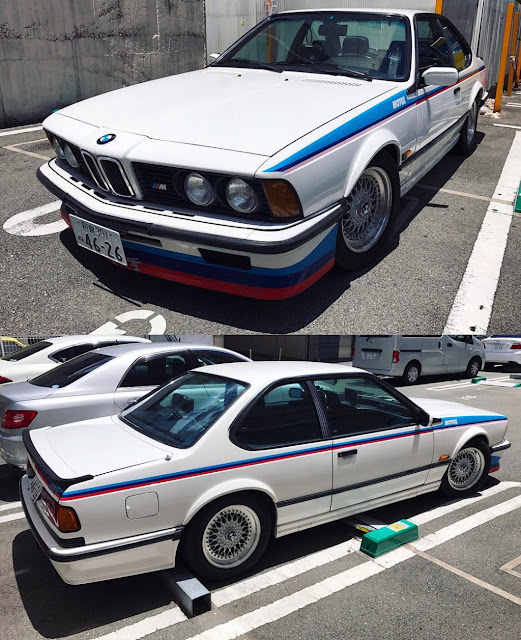 ..now a little further south, and an anonymous back-street in Osaka. It's something that while not Japanese made, Japanese-specific, or possibly even (this particular car) delivered new; I *very* rarely get to see: a 1983- E24 BMW M6 (M635CSi). A combination of that's-a-little-too-much hurdles (including pesky details such as what would've been a huge when-new price) meant these never properly made it to Australia; so yep.. that's certainly awesome.. 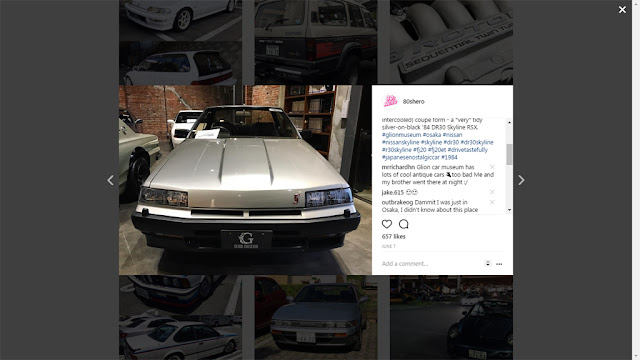 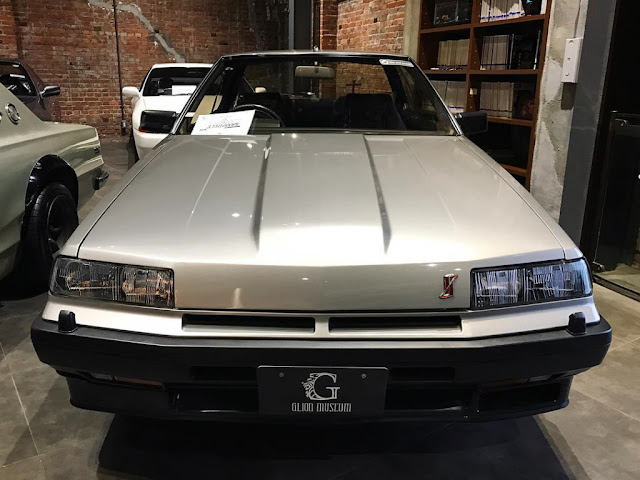 ..still in Osaka; comparatively shooting fish in a barrel on the hunt for 80s tin, with a day spent at the Glion Museum. While not exactly the museum's forte (pre-war US, European, through to chrome-bumper Japanese), the dealership/sales side of the business had more than its fair share. My pick of that bunch? Well here's a shot of the pointy end: Nissan's sixth-gen Skyline in top-tier FJ20ET (turbo, intercooled) coupe form - a *very* tidy silver-on-black '84 DR30 Skyline RSX. 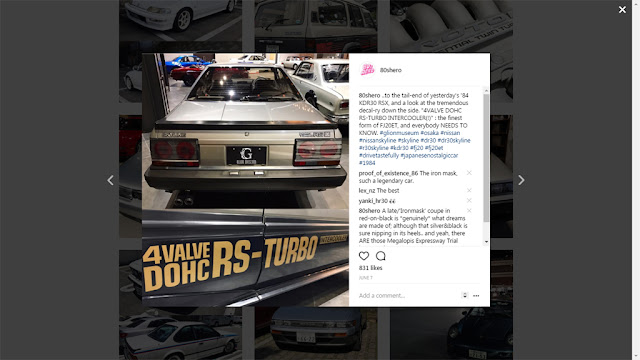 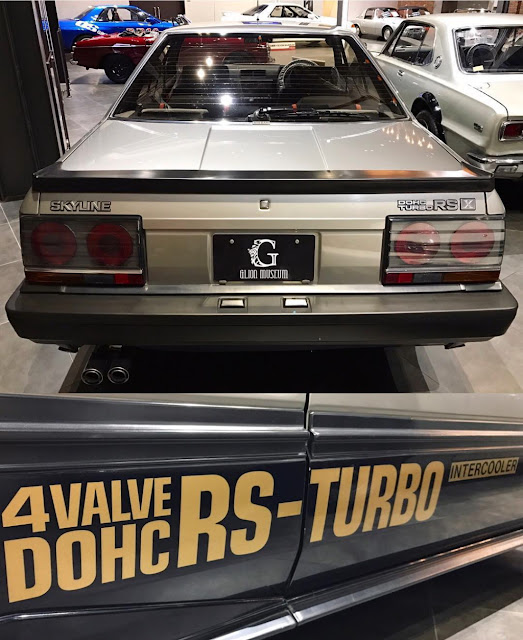 ..to the tail-end of yesterday's '84 KDR30 RSX, and a look at the tremendous decal-ry down the side. "4VALVE DOHC RS-TURBO INTERCOOLER(!)" : the finest form of FJ20ET, and everybody NEEDS TO KNOW. 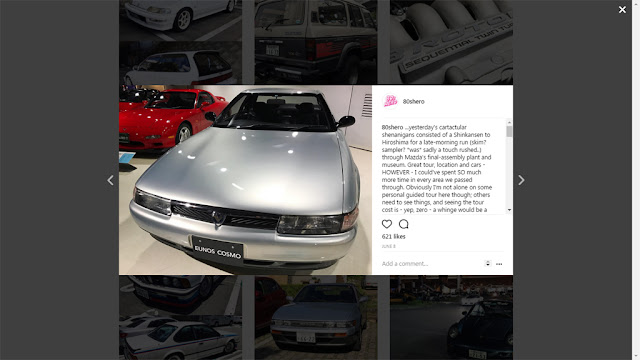 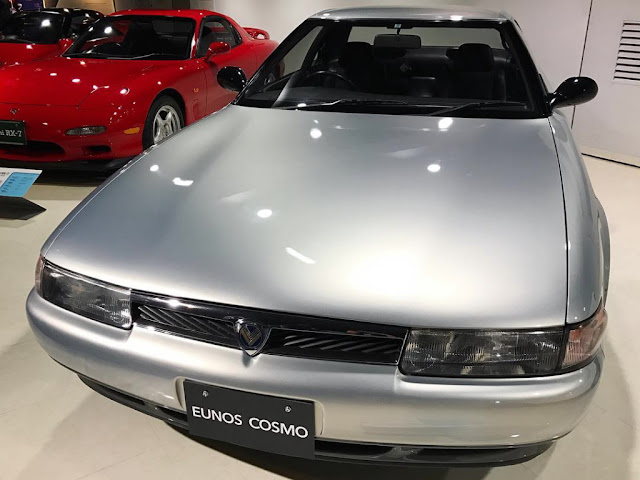 ...yesterday's cartactular shenanigans consisted of a Shinkansen to Hiroshima for a late-morning run (skim? sampler? *was* sadly a touch rushed..) through Mazda's final-assembly plant and museum. Great tour, location and cars - HOWEVER - I could've spent SO much more time in every area we passed through. Obviously I'm not alone on some personal guided tour here though; others need to see things, and seeing the tour cost is - yep, zero - a whinge would be a little rich! Fantastic setup regardless. In a smallish corridor of automotive-highlights in Mazda's history, and with my back to a 787B (it's possible, amazingly), I'm faced with one of my Gran-Turismo-1-in-the-late-90s dream-machines: the 13B (oh) and 20B (ah!) 1990- JC Cosmo. Ownership a little frightening? Fuel-bills keep you up at night? Pah, worth every second. 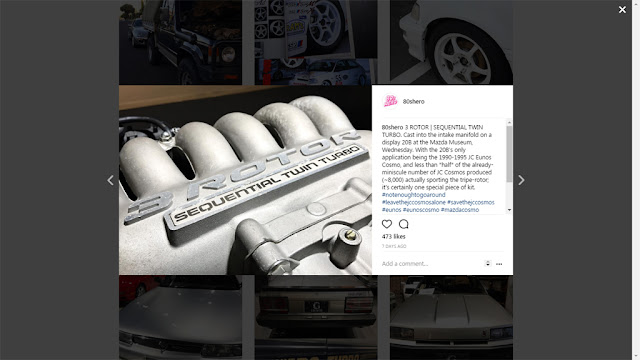 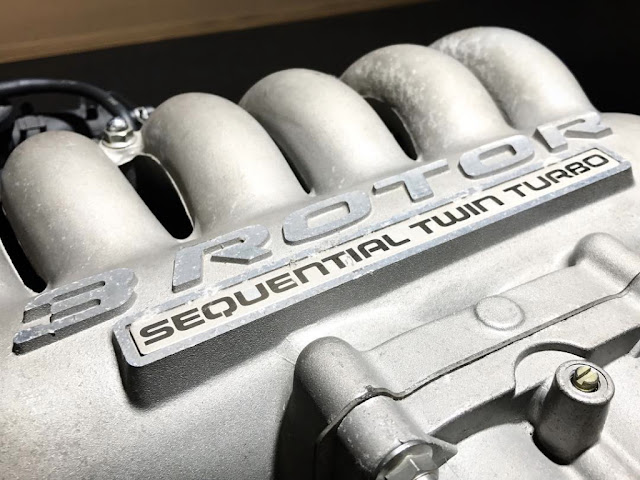 3 ROTOR | SEQUENTIAL TWIN TURBO. Cast into the intake manifold on a display 20B at the Mazda Museum, Wednesday. With the 20B's only application being the 1990-1995 JC Eunos Cosmo, and less than *half* of the already-miniscule number of JC Cosmos produced (~8,000) actually sporting the tripe-rotor; it's certainly one special piece of kit. 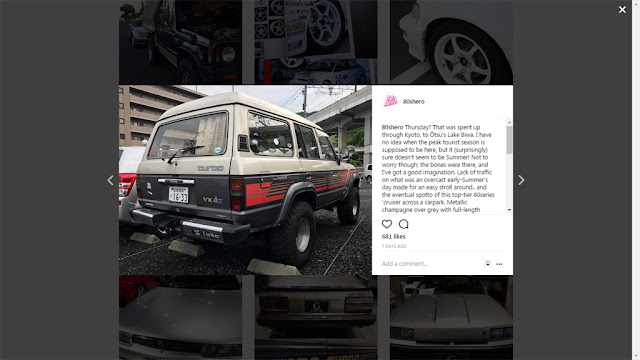 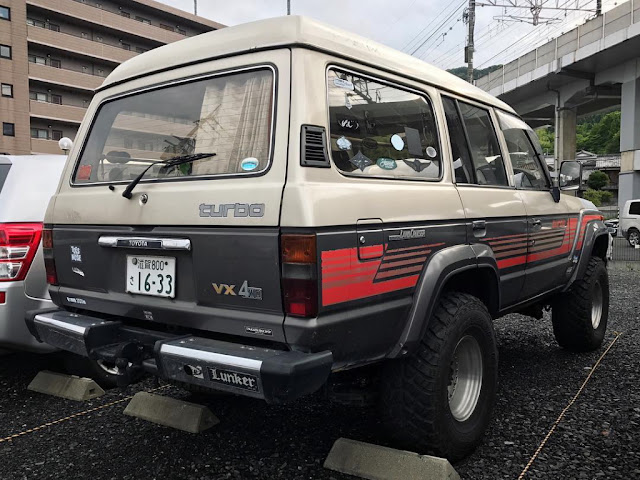 Thursday? That was spent up through Kyoto, to Ōtsu's Lake Biwa. I have no idea when the peak tourist season is supposed to be here, but it (surprisingly) sure doesn't seem to be Summer! Not to worry though; the bones were there, and I've got a good imagination. Lack of traffic on what was an overcast early-Summer's day made for an easy stroll around.. and the eventual spotto of this top-tier 60series 'cruiser across a carpark. Metallic champagne over grey with full-length orange decals ("turbo", "FOUR WHEEL DRIVE"), and bodywork that's ramming "it's a freshwater lake" down my throat before I'd ever even have to go look! It's a good'un. 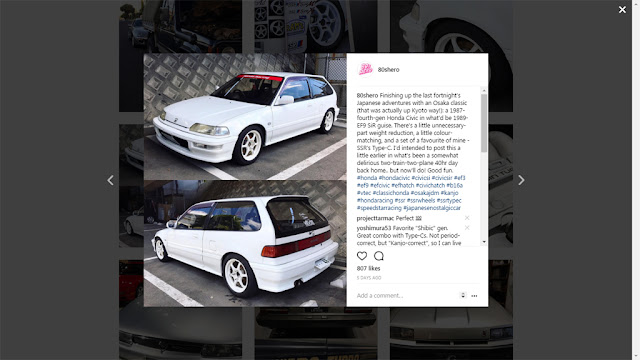 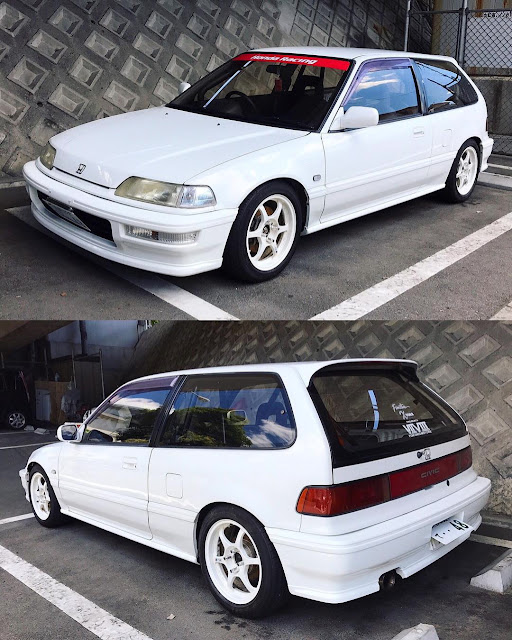 Finishing up the last fortnight's Japanese adventures with an Osaka classic (that was actually up Kyoto way!): a 1987- fourth-gen Honda Civic in what'd be 1989- EF9 SiR guise. There's a little unnecessary-part weight reduction, a little colour-matching, and a set of a favourite of mine - SSR's Type-C. I'd intended to post this a little earlier in what's been a somewhat delirious two-train-two-plane 40hr day back home.. but now'll do! Good fun.