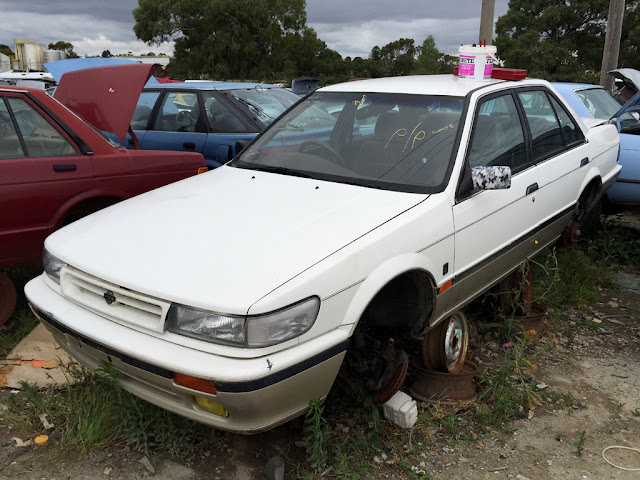 Nope, we're looking at a white-on-gold two-tone, ruffled brown velour interior, and all the 1990 economy-luxury trappings. It's the faux-luxury death sentence for variants that unfortunately dodged the fun bits when rolling down the line.
I've said it before, but (typically) it's the sports-inspired variants that get to survive, not cars with the plush bits and dated convenience features: it's 'Faux-sports, not faux-luxury'.
Think of any model line that diverges into sports and luxury as it steps through the grades. Down the sports line we often get aero pieces, racing-styled alloys, foglights, brighter colours, fun graphics, and fabrics of black and grey stretched over more heavily bolstered seats.. maybe an LSD.. a bigger engine.. sports exhaust.. just good things. Things people would still like to have today.
Down the luxury line? Well that's totally dependant on the year. In 1990 we would be seeing things like power windows, cruise control, air conditioning, leather.. or velour.. or ruffled velour.. or buttoned ruffled velour.. or ruffled leather.. or something equally (and hilariously) heinous. We'd get turned alloys, chrome thrown at the handles.. or mirrors.. or around the glasshouse; and depressing dark reds, greens, and blues - maroon, British racing green, Jewish racing gold, a pearl white maybe? Typically things a young kid isn't exactly going to screaming to get their hands on. The luxury dates.. 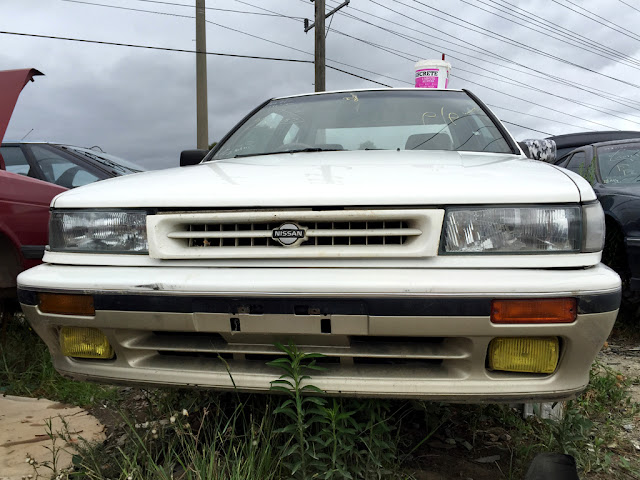 1990 U12 Nissan Pintara Ti.
An Australian-assembled variation of the '87-'92 U12 Bluebird, sold locally as both the Nissan Pintara and Ford Corsair. Pillared sedan or long-roof hatch, a couple different engines depending on grade, and front-drive only. The oh-so-luxurious Ti trim level above was the top-of-the-line.
It wasn't technically too bad either..! It got the same large-capacity four as the (equally doomed) sporting variant mentioned above - the TR-X - as well as the viscous LSD to get that mountain of power to the ground..
..this one even looked to have been bought by a young kid, who's tried in vain to spice it up a little with some vinyl wrap.. but very quickly given up. That brown velour was too hard to hide.
That's where they've gone wrong you see. Those dated luxurious trimmings..? You have to own them. I can't help but like cars for what they are. This Ti? I like this Ti. Keep it polished up.. keep it spotless.. drive it with a straight face. It's 1990. You're a somewhat-successful young businessman. You're in fleet-special heaven.. 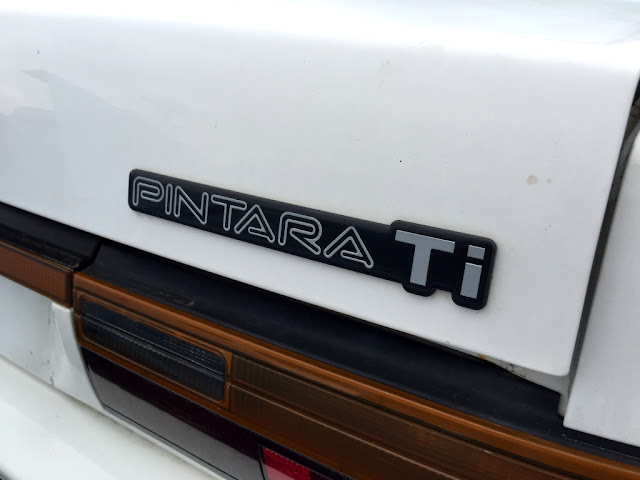 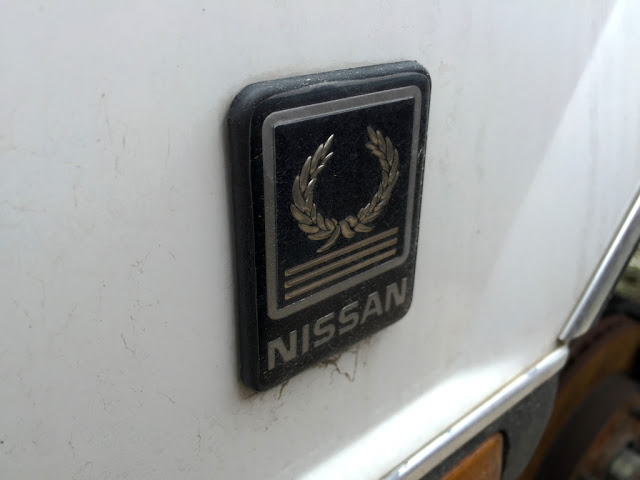 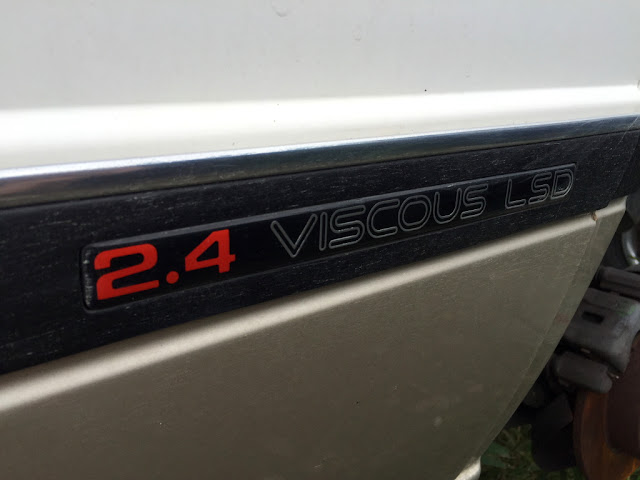 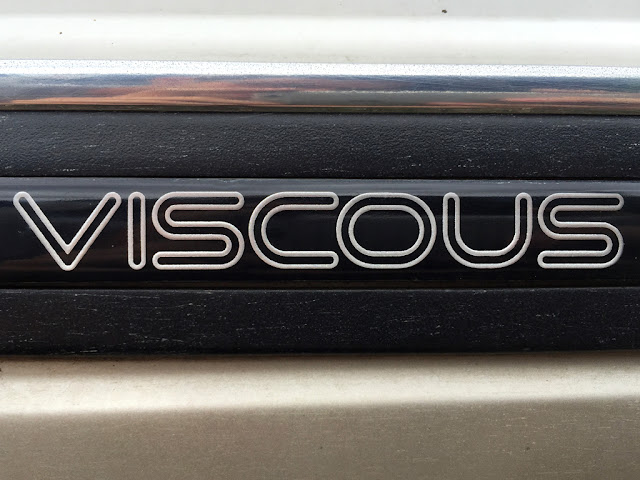 The Viscous ('viscious') LSD badge I've joked about since I was a kid. 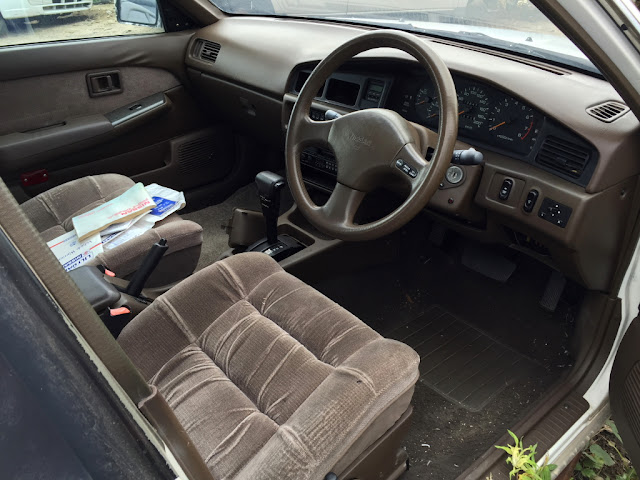 Inside; a world-of-brown, and soft, soft, velour.. 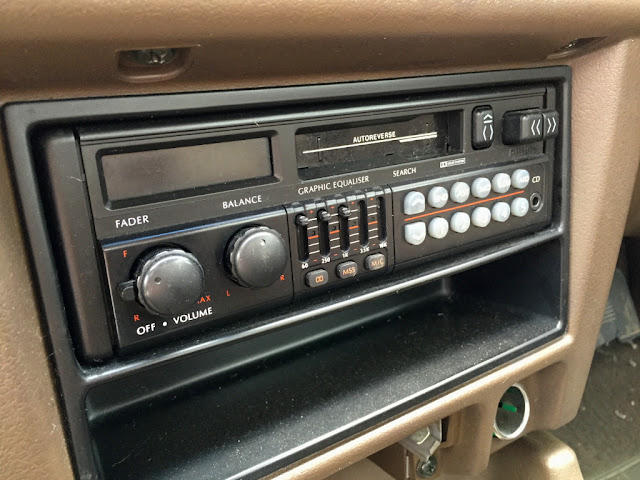 The original Nissan tapedeck, with a handy CD/aux input. It's 1990, and the once-wild graphic equaliser controls are getting smaller; there's a whole spare half-din space that could've been used..! 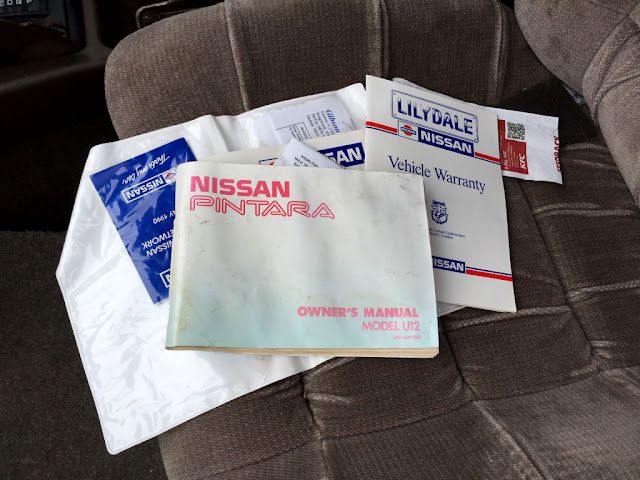 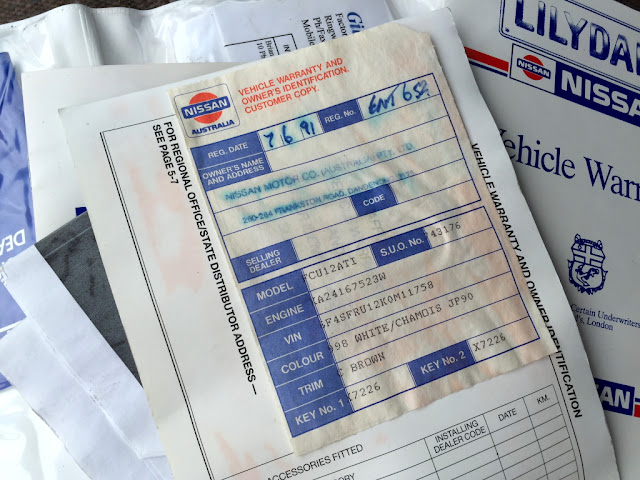 The original books and manuals. First registered to Nissan Australia in Dandenong, and serviced through a Nissan dealer in Lilydale.. both around half-an-hour from where it has ended up.
Interestingly the build date is August 8th 1990, yet it wasn't registered until the 7th of June 1991?! I get the feeling the Pintara Ti mightn't have been an easy sell!
..also interesting here? It's the 25th anniversary of the date this finally hit the road. Too bad it didn't make it... 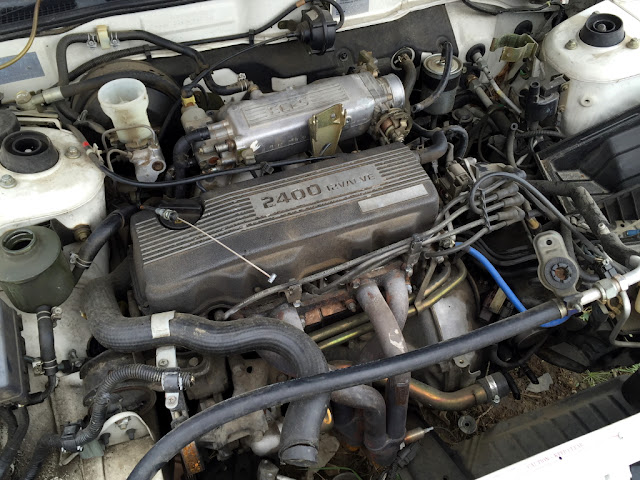 A shot of the partially disassembled KA24E that ran the show.
US readers may recognize this as the engine used in the early S13 240SX.. oddly in place of the CA18DET that otherwise would've made perfect sense. Single-cam and sans-turbo.. the relatively-large 2.4 litres of capacity providing the decent ~96kw and 189nm of torque to move the ~1200kg sedan. 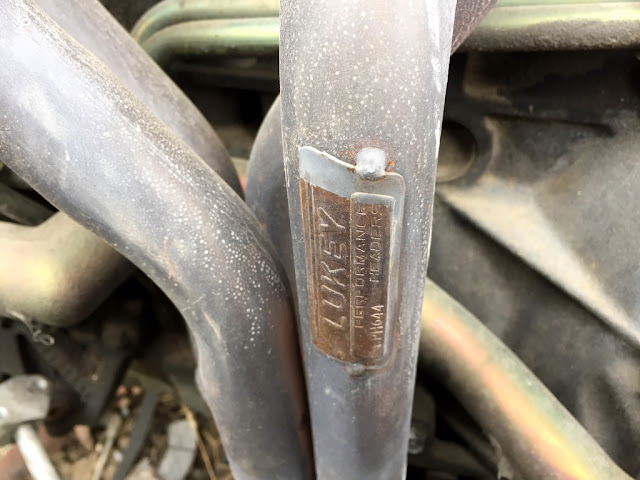 ..and just as out-of-place as the camo vinyl-wrap on the passenger wing-mirror; a set of local Lukey headers. Seriously odd.