A closer look at a couple (Instagram) posts from last week that had turned out to be surprisingly popular. Maybe popular because they were surprising? I don't know. Either way, there's a lot more Galant fans out there than I'd thought! 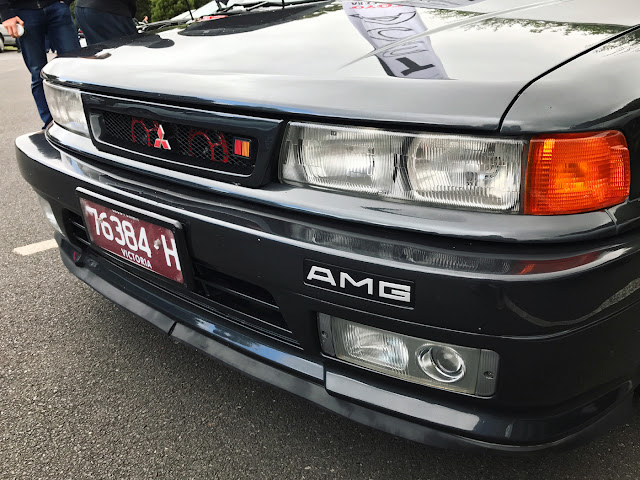 "...but where's the four-wheel-drive? The turbo'd 4G63? The VR-4 badges.. and group-A-'Evolution' homologation reason-to-exist that'd make this that temendously-relevant step back from 1998?" Not here.. and in this case, I'd hardly care. It was this AMG-enhanced (yes, that AMG) variant that sat above all other sixth-gen Galants when new; with that subtle bodykit, 170PS NA-tune 4G63, and MMC-badged potential to irritate AMG-Mercedes owners (in the years before Mercedes took it upon themselves to dilute the hell out of the brand): the 1989- E33A Mitsubishi Galant AMG. Autobahn Midnight. 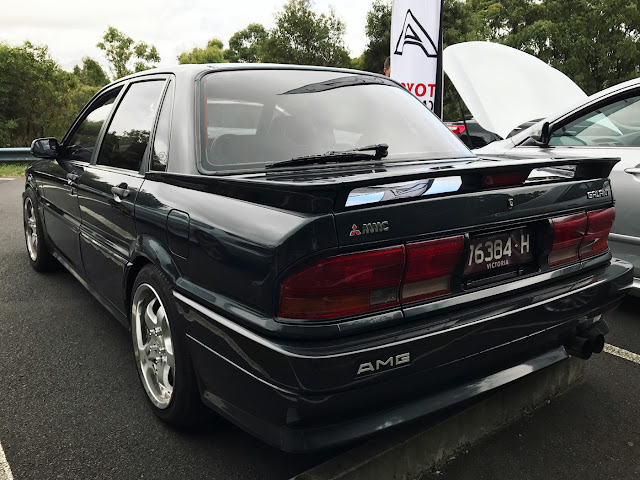 As I always try to keep the posts/topics flowing along (since many aren't keen to see something in their feed for days and days...), I then moved on.

Well, not a lot more.. but one or two others I'd taken that day, at the TCCAV February meet. 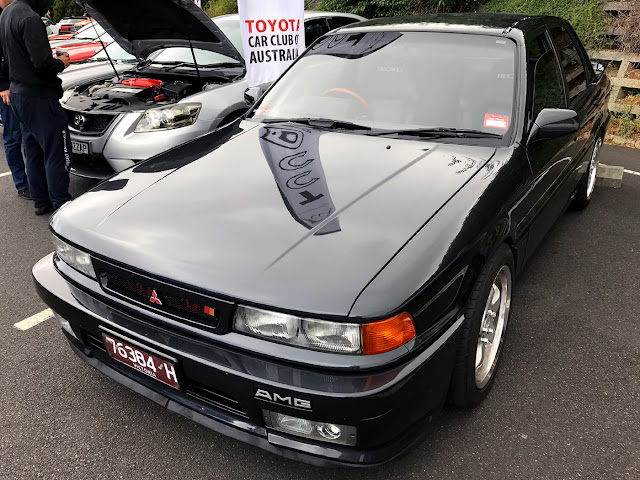 There's another from the same three-quarter - now standing... 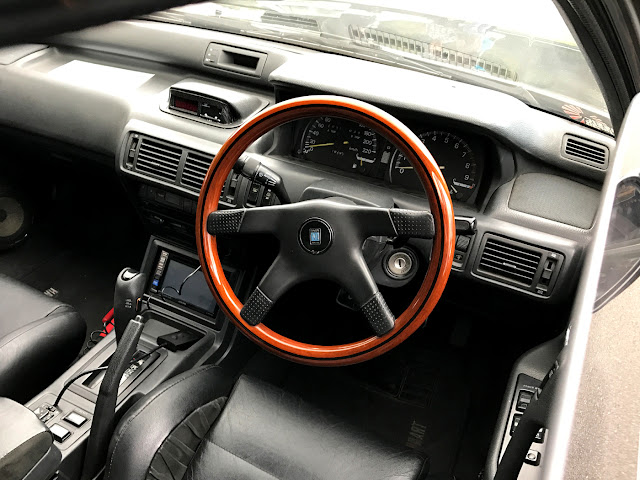 ...and a creeper shot through the slightly-opened windows.
A little more modified inside than it is out (various bits of audio gear, trimmed Recaros, etc; vs. the wheels and exhaust), but essentially all there, and all very tidy. I have no idea how long I'd have to wait to see another, so as always - beggars can't be choosers!

Now at this point - regardless of whether it's Instagram or a faff-tastic blogpost - I'd move onto a few brochure shots, or a magazine advert; something from the period/manufacturer that would be relevant and interesting, showing how it was presented when new.
Yet no dice.
I was genuinely surprised at how little advertising there seems to have been at launch. I skimmed through a heap of magazines from the time (late 1989), and nope.. nada. Yeah, there's adverts for Galants.. and adverts for other products featuring Galants. But they're other variants, or (not so surprisingly) using the faster, rallying, VR-4 poster-child.

So failing that, let's just look at some technical bread-and-butter from the time: 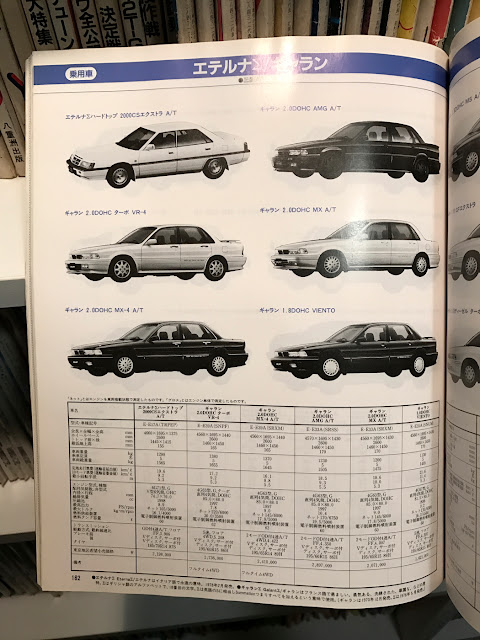 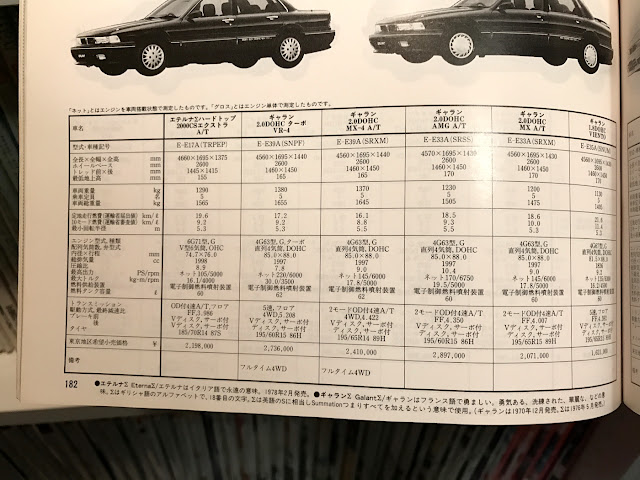 From the late-1989 introduction, third from the right.
I'd mentioned it in the original Instagram post above, but again, look at the price compared to the VR-4. Without the turbo performance or AWD grip, Mitsubishi must have been putting a lot of weight on the AMG name.. 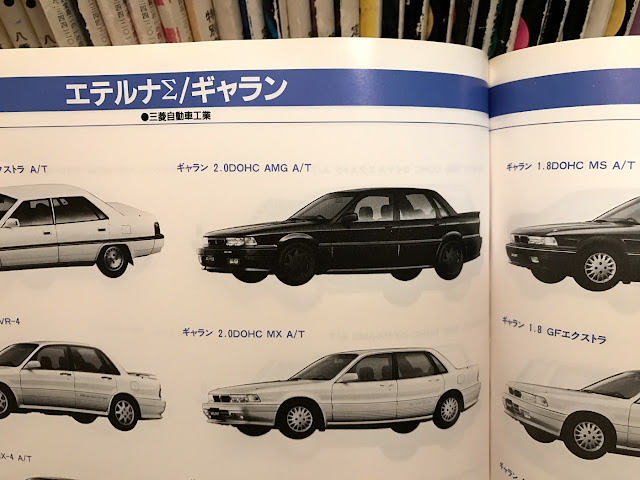 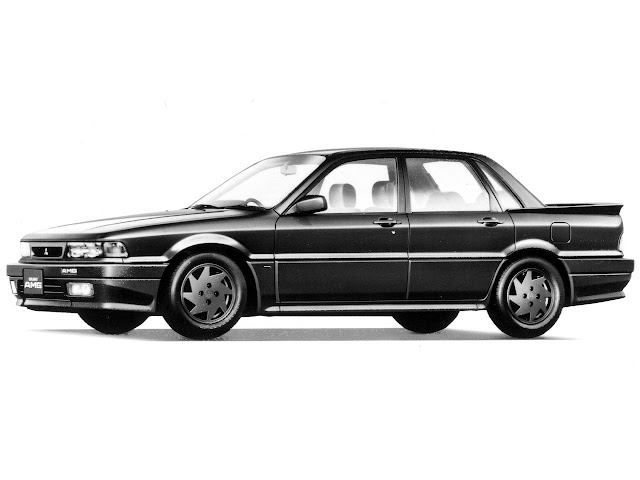 ..a much larger view of this promotional shot. 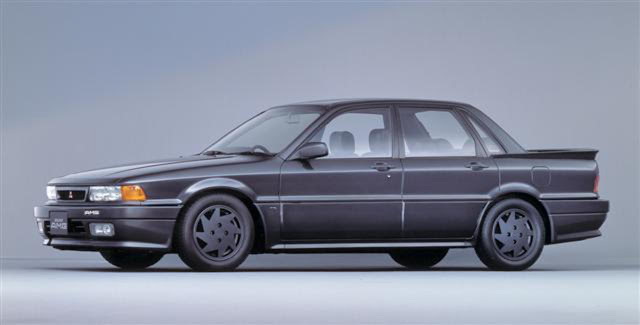 ..what would've been the original... 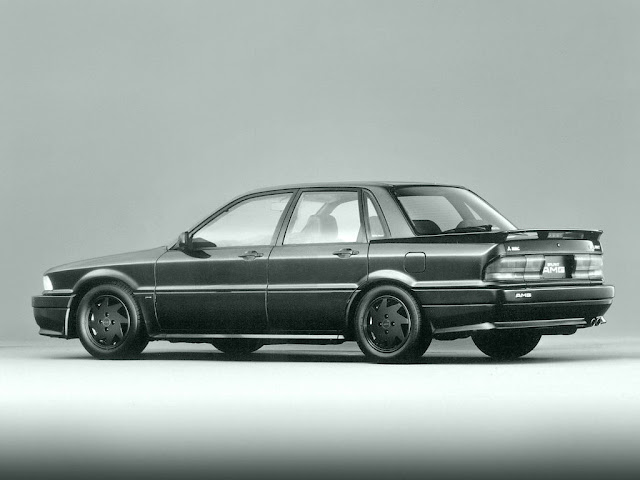 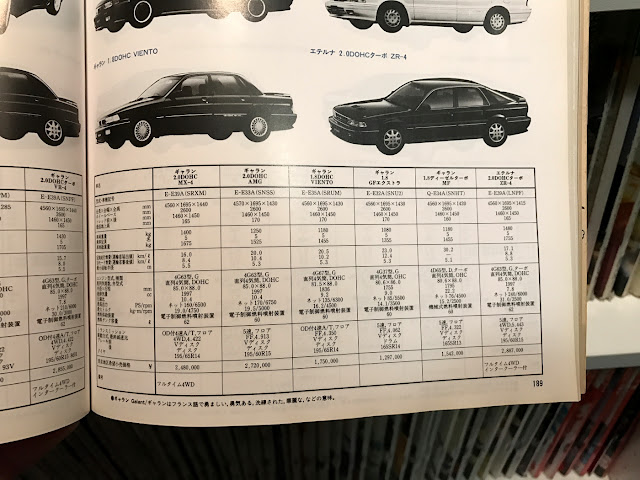 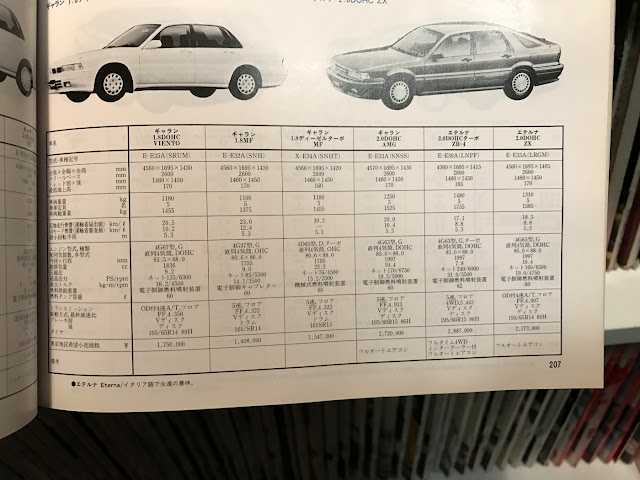 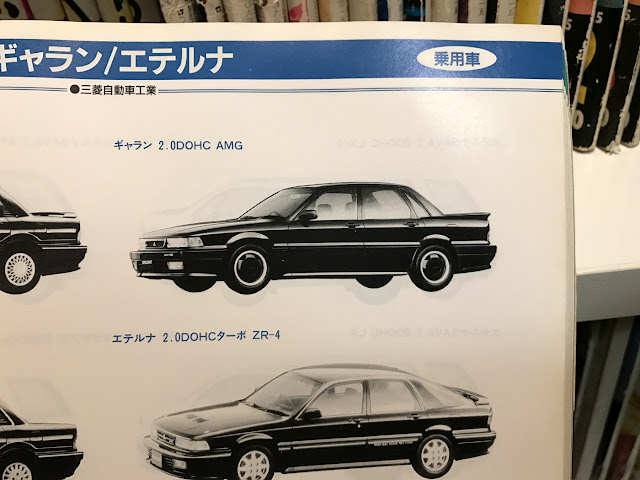 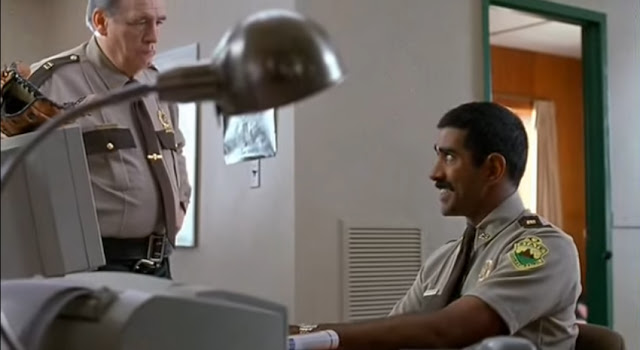 From the 1990 and 1991 books.
The model looks to have been very gently revised some time in late '90 or early '91. There's new wheels at the very least, and the model is now split into Type I and Type II - the latter introduced as a stripper lower-priced (around 500,000 yen less) alternative.

I'm not sure if the AMG variant continued right through to the end, but 1992 was the end of the generation regardless. Three years of AMG-badged Galant fun.

AMG of Germany. A name synonymous with the ultimate in automotive construction in Europe. The work of these professionals enhances the overall quality of automobiles that have already attained outstanding recognition for excellence. AMG's tuning philosophy is that of a perfectionist, and the company's advanced technologies are fully reflected in the Galant AMG 4-door sports.
AMG designed aerodynamics-enhancing body parts, original body paint and so on to make the Galant AMG an astonishingly bold presence. The cockpit and cabin area combine to create a magnificent space punctuated by quality amenities. Unparalleled driveability is the result of exhaustive tests on the autobahn. However you look at it, this 4-door sedan reveals exhilarating quality. The fine-tuned Galant AMG. The marriage of Japanese and German technologies and senses places it at the top of the 4-door sports car class.