It may be a far cry from Japan-1985's top-tier FULL TIME 4WD 1600 DOHC TURBO GT-X Familia; but the sportiest of Australia's early fifth-generation Familias - badged locally as the 323 - is honestly no less special to see. These are few and very far between.

So below, a bodgy phone-photoset of a neat enough example I stumbled upon at the wreckers almost two years ago now; as always kicking off with a little recycled Instagram-postery from the time: 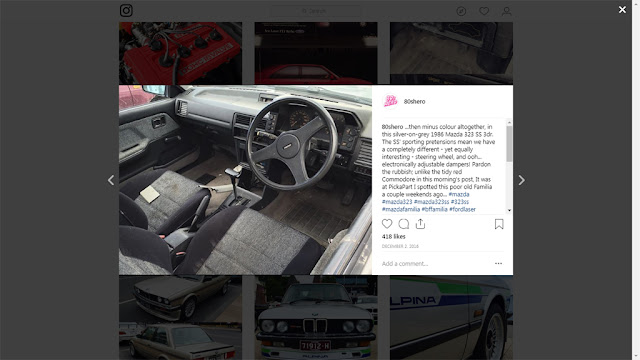 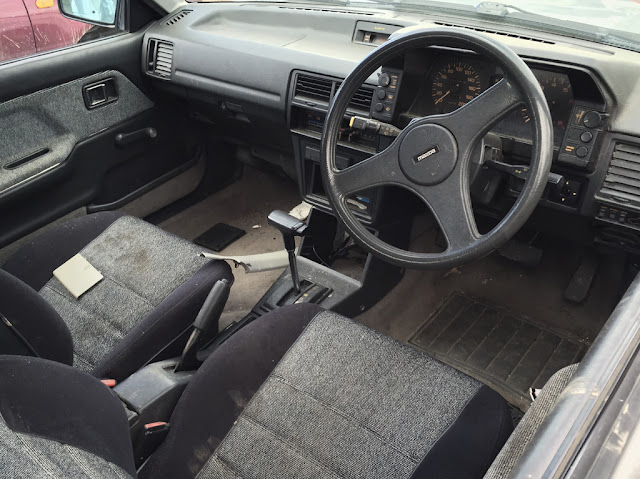 "...then minus colour altogether, in this silver-on-grey 1986 Mazda 323 SS 3dr. The SS' sporting pretensions mean we have a completely different - yet equally interesting - steering wheel, and ooh... electronically adjustable dampers! Pardon the rubbish; unlike the tidy red Commodore in this morning's post, It was at PickaPart I spotted this poor old Familia a couple weekends ago... #mazda #mazda323 #mazda323ss #323ss #mazdafamilia #bffamilia #fordlaser #japanesenostalgiccar #1986" 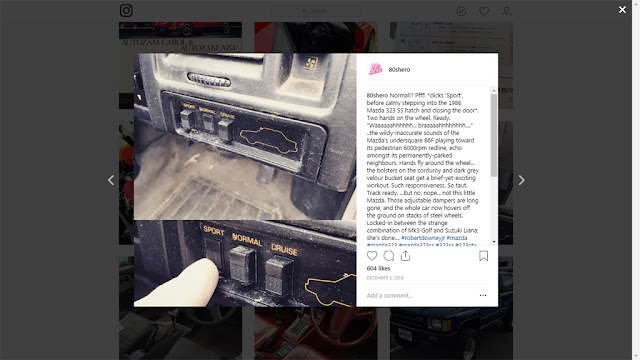 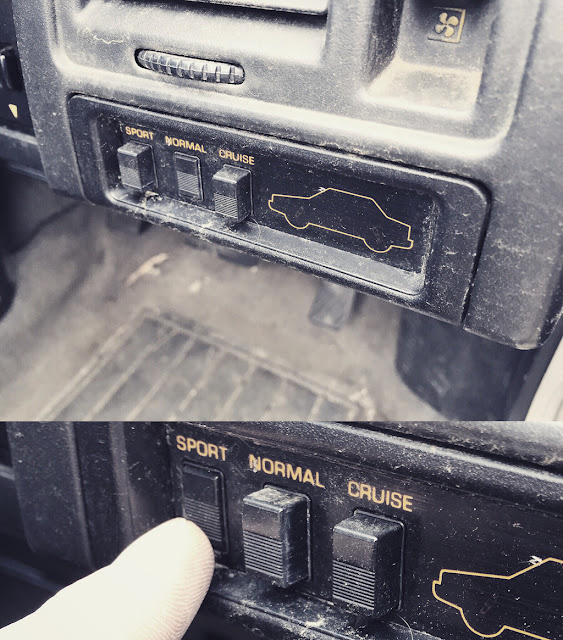 "Normal!? Pfff! *clicks 'Sport', before calmy stepping into the 1986 Mazda 323 SS hatch and closing the door*. Two hands on the wheel. Ready. "Waaaaaahhhhhh... braaaaahhhhhhhh...." ..the wildy-inaccurate sounds of the Mazda's undersquare B6F playing toward its pedestrian 6000rpm redline, echo amongst its permanently-parked neighbours. Hands fly around the wheel... the bolsters on the corduroy and dark grey velour bucket seat get a brief-yet-exciting workout. Such responsiveness. So taut. Track ready. ...But no, nope... not this little Mazda. Those adjustable dampers are long gone, and the whole car now hovers off the ground on stacks of steel wheels. Locked-in between the strange combination of Mk3 Golf and Suzuki Liana; she's done.... #robertdowneyjr #mazda #mazda323 #mazda323ss #323ss #323gtx #bf323 #mazdafamilia #bffamilia #fordlaser #electronicadjustabledampers #japanesenostalgiccar #1986" 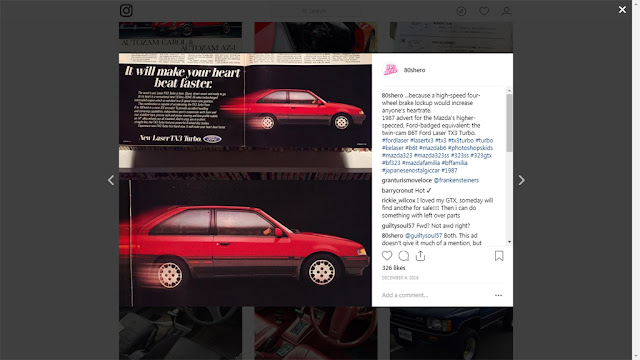 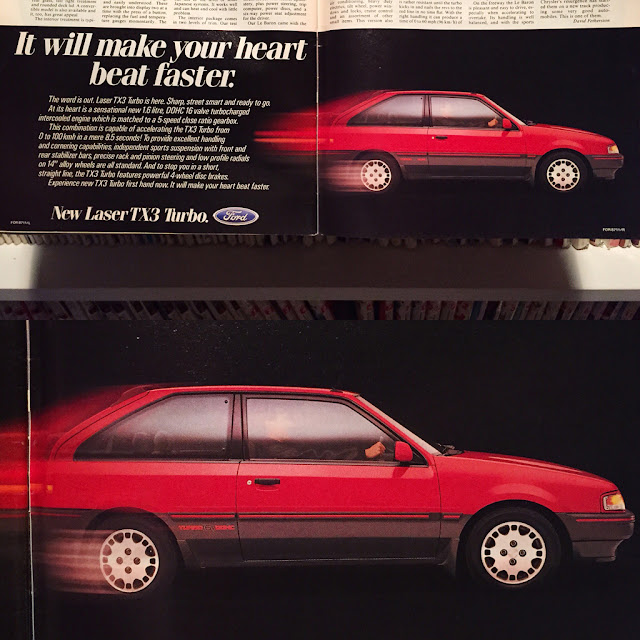 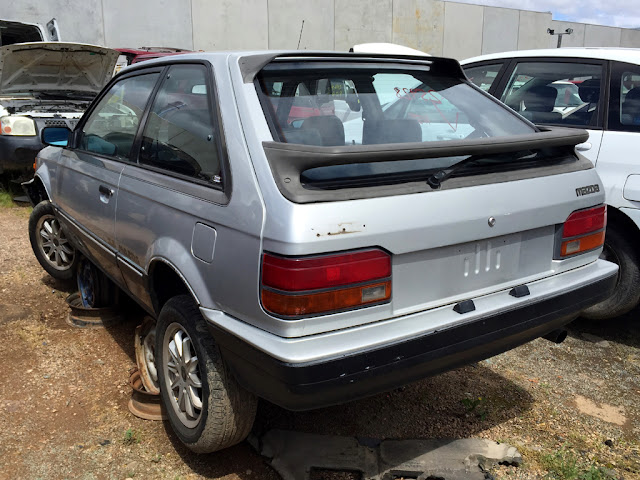 So here we are. Near twenty-thousand late-1985/1986 Australian dollary-doos of the sportiest of Mazda Thrice Twice Thrice.
Much of the appearance of its home-market big brother, but instead here motivated by a single-cam 8V B6 1600cc four, an auto trans and front-wheel-drive only. Australia wouldn't see factory boosted versions until an update in late 1987.. 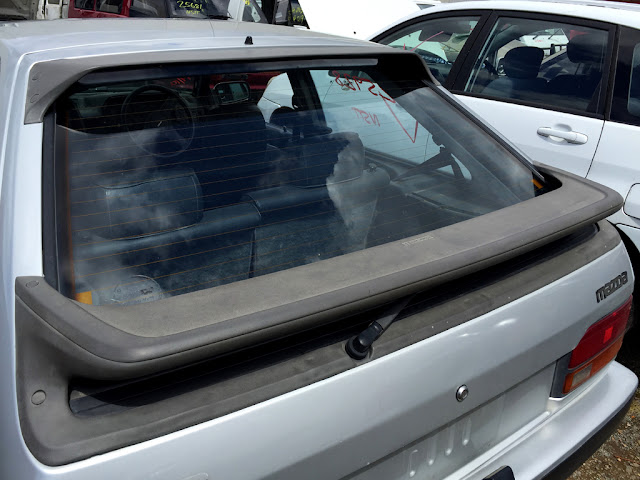 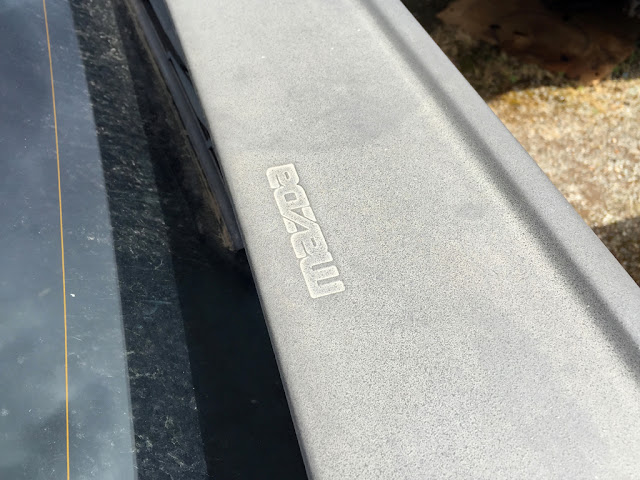 Subtle detailing on the upper surface of the lower spoiler. 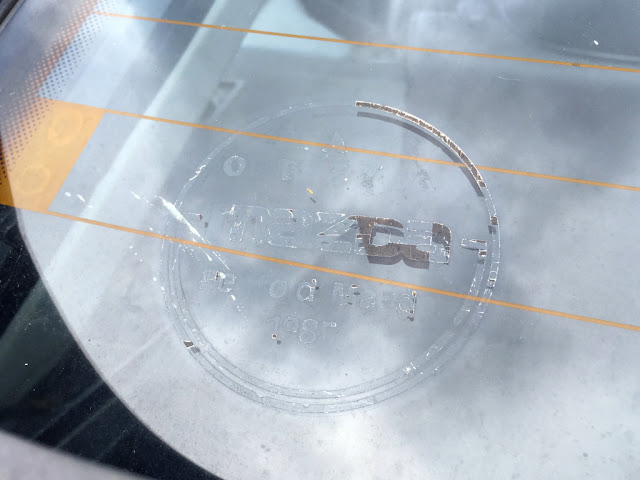 Original Penfold Mazda dealer sticker. It sadly appears to have been a well-loved car that experienced a rapid decline.. 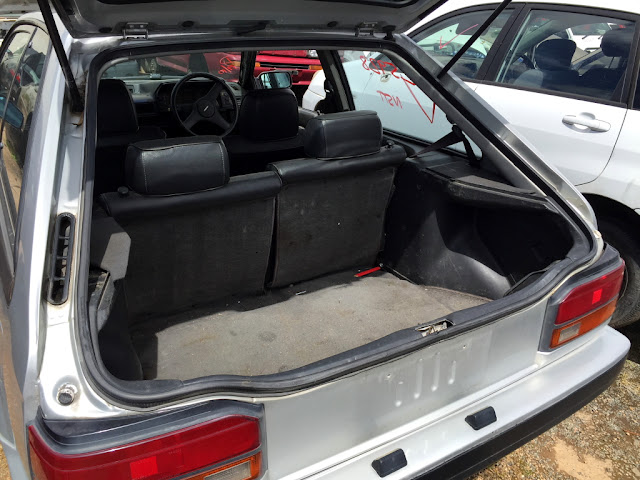 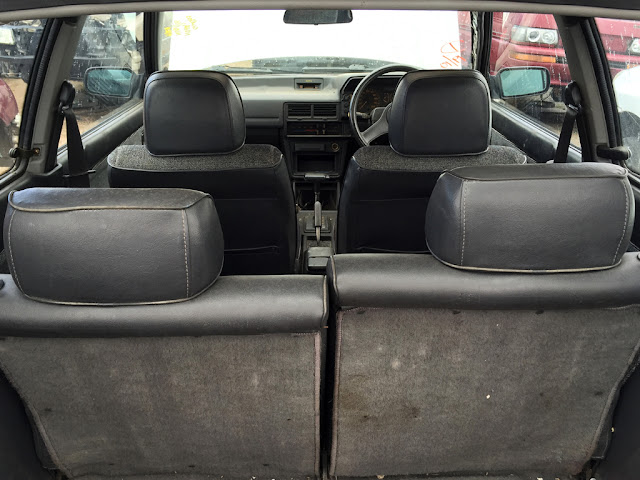 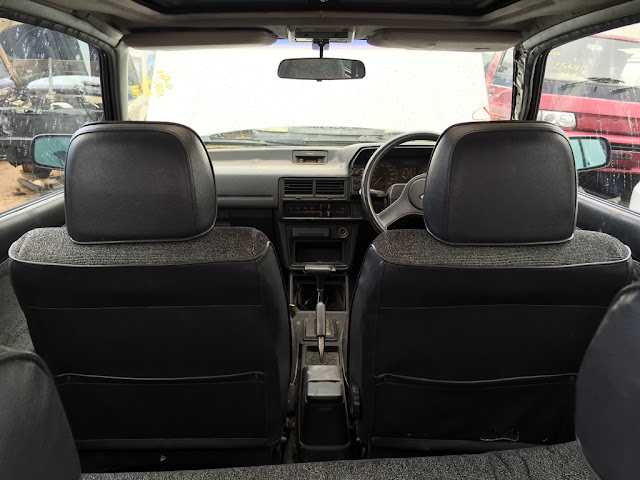 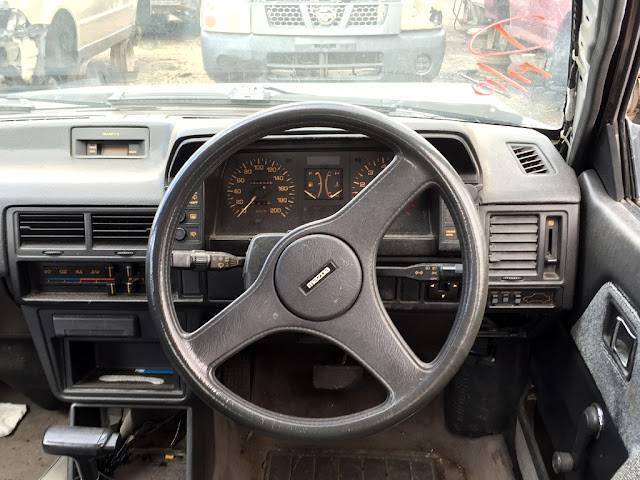 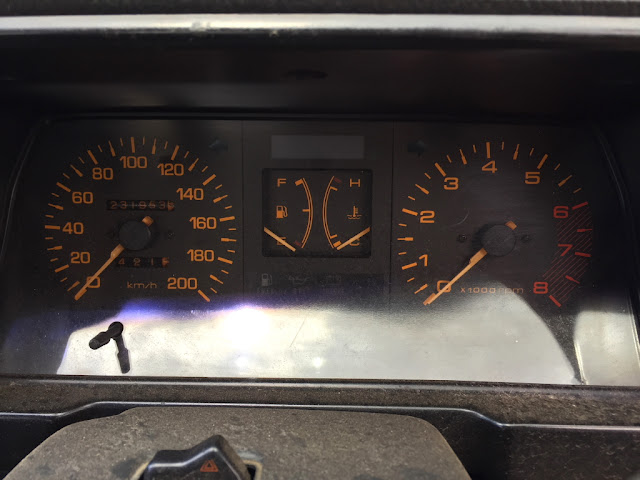 232,000km, but heading into a decade of quality Mazdas (and Japanese cars in general). It has held up well. 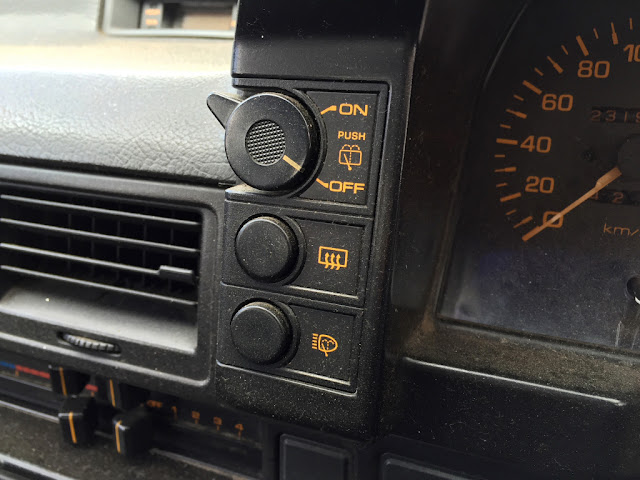 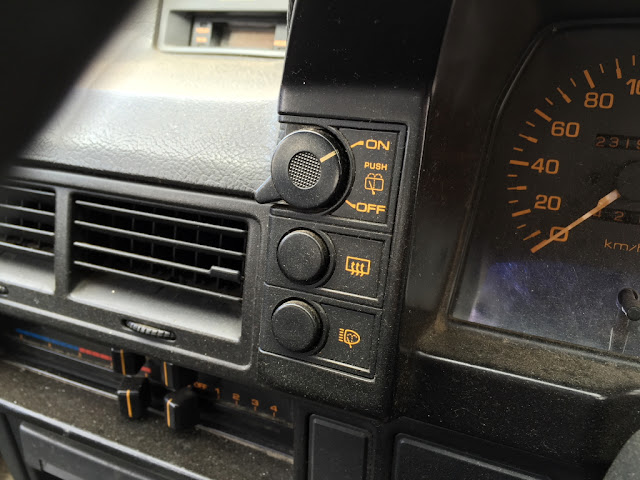 Minimalist wiper controls on the dash. 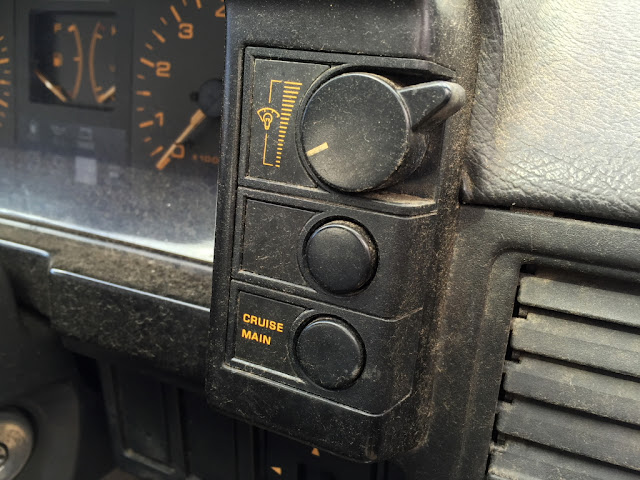 ...and ohhh... symmetry: the matching headlamp and cruise controls to the right of the wheel. 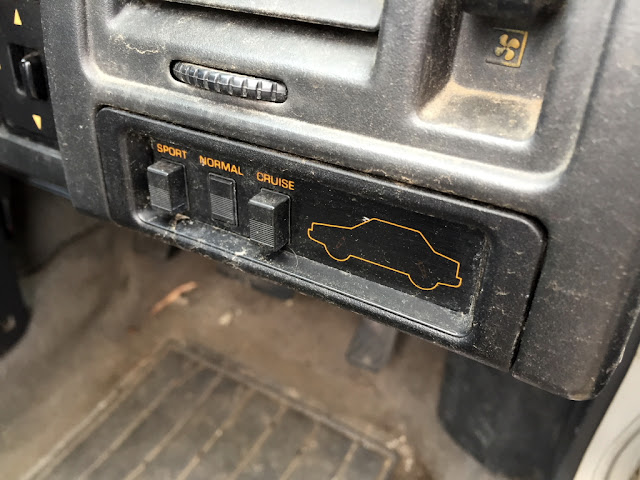 Below, the adjustable damper controls as joked about in the Instergrems post above. 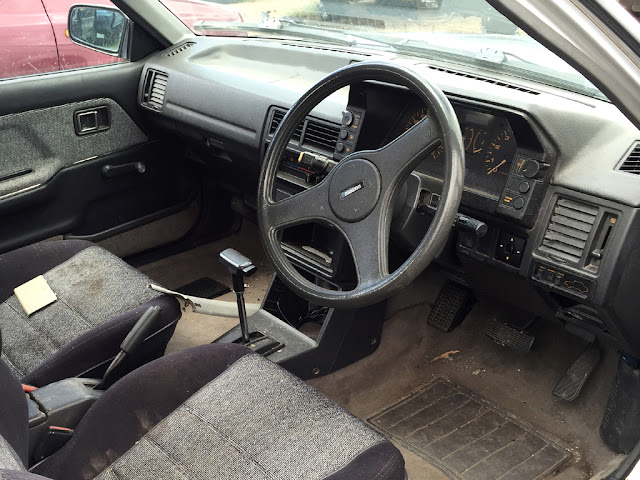 Ignoring the walking-stick-turned-auto-shifter protruding from the console, that seems a nice place to be. Well, a centre armrest wouldn't have hurt.. 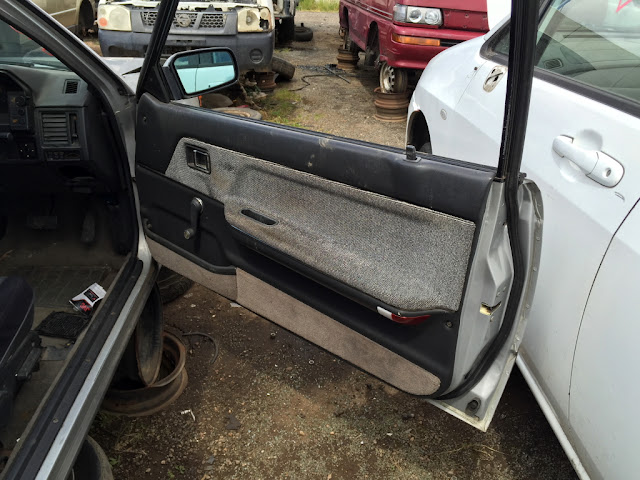 ..and manual crank windows are surprising for a high-specced Japanese car of this era. 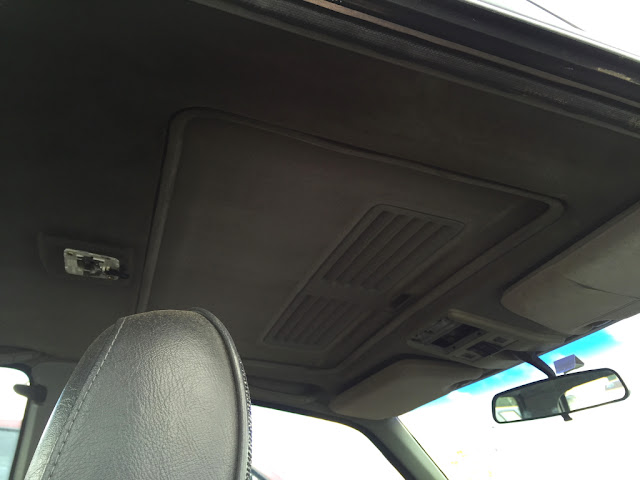 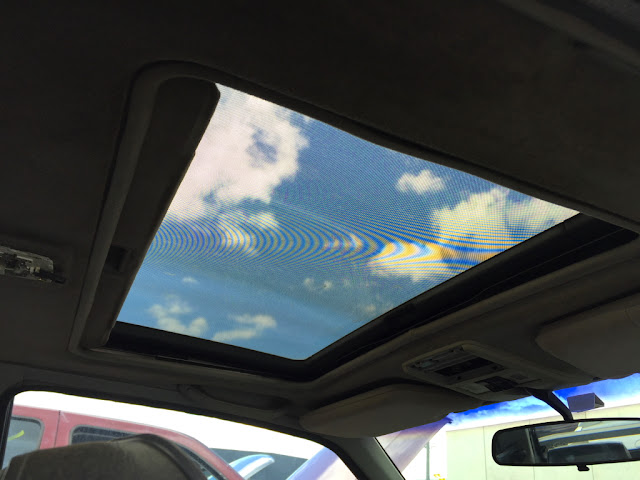 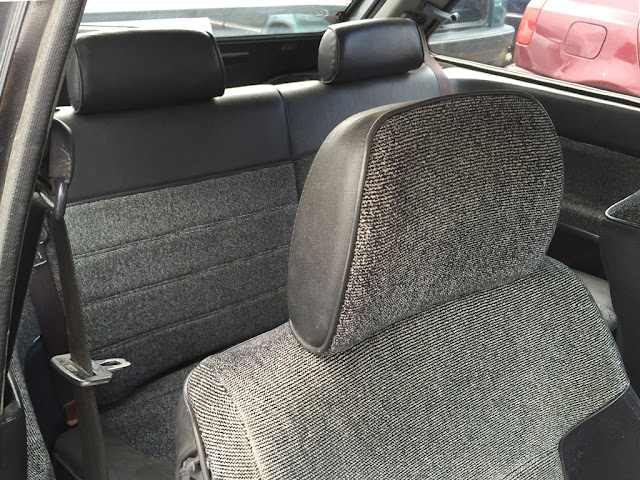 I do like the fabric/vinyl combination treatment here. Looks great. Interesting to note the completely different front and rear seats to the previous blogpost's Familia GT-X. 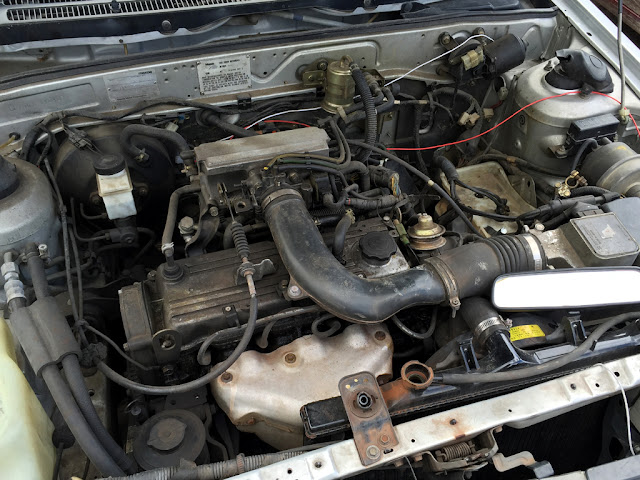 Again, the single-cam B6 non-turbo four... and you know, a spare rear-view mirror. 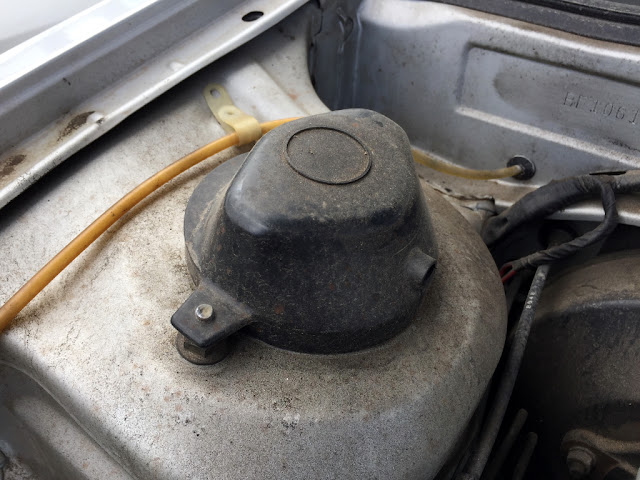 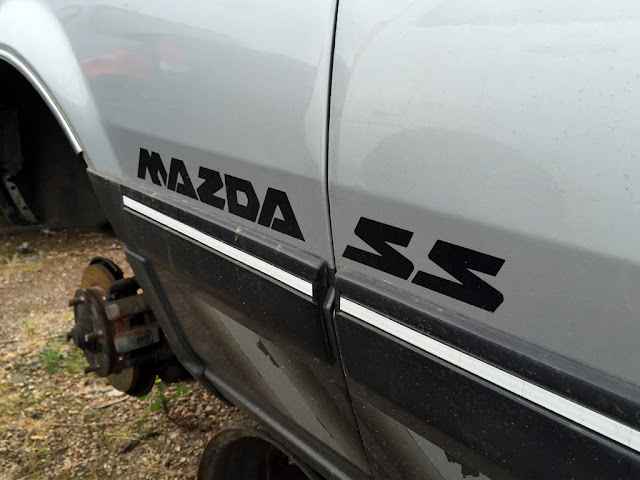 As mentioned above, it was almost two years ago now that I came across this car at the wreckers - late 2016. Whatever this scrap metal became is probably already in landfill. Urgh. Yet again I'm glad I got a chance to give a reasonably original example a look-over before it was too late..