..or 'revisited'.. which I would've gone with had it started with an A.

...because that's what we're doing here. It's another look at the French design fabulous-ness, hurled into the spotlight in that post from May last year.

Eleven-months-between is just too damn long.

Actually, I'd been asked by someone (writing an article on the brand's automotive efforts) for higher-res versions of the previous scans, as well as any others I could relatively easily find.
Well eventually I sat myself down for a good skim through those thirty-year-old magazines - no easy task when this series of adverts ran off-an-on for five damn years, every.. say.. second month or so, in a magazine with 400-odd very distracting pages.
Finding them is a goddamn ordeal.
A poorly-spent evening later, I'd skimmed through a bunch of magazines (even at a minute a mag, 5years is a full hour..) scanned the ones I'd found, and emailed them away. Good. Great. Done.

..but a couple of weeks after that, while looking for something else? Another advert. Then another. Urgh...

Anyway... THESE ARE THOSE OTHERS! No, not the recent other-others, but the few-weeks-ago-scanned-and-sent others; as finding these when I need to.. yeah, that's not easy. 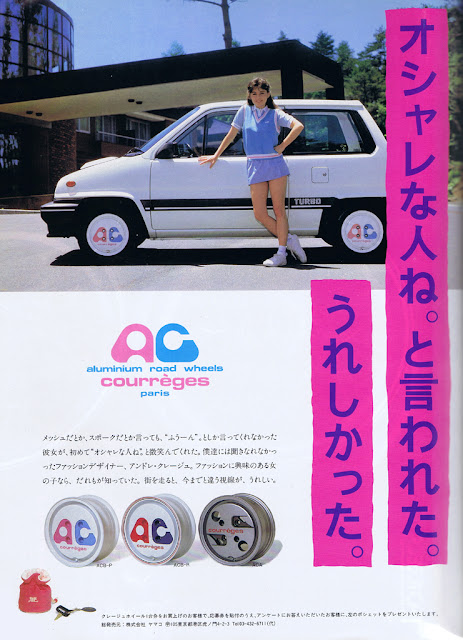 Starting with an early one from '83, and what'd be the last of the not-particularly-abstract adverts. Yep, just a plain old shot of an actual car - in this case a narrow-body Honda City Turbo - and the original low-alphabet AC wheels...

..which are out of order, of course, because non-conformist: The ACA, ACB-P(ink) and ACB-R(ed). 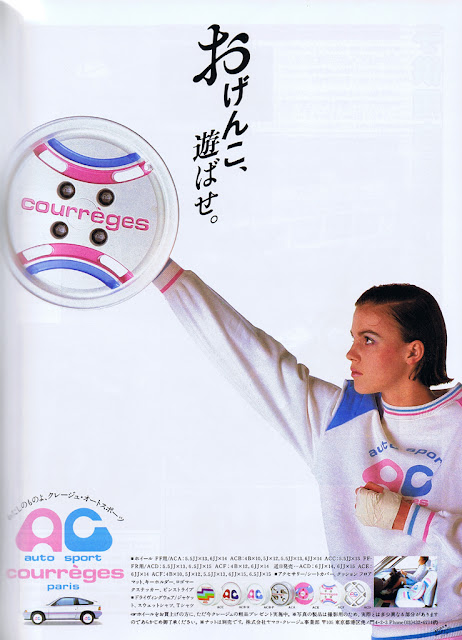 Jumping to late 1984, with a woman boxing with an ACF for a hand. This comes after the rollerblading and skiing adverts in the previous post, and is clearly from the same tremendous series. 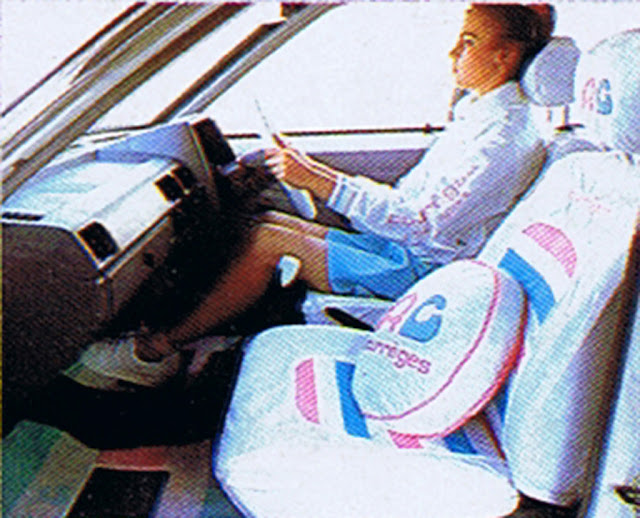 It's only a year later, but the A's and B's have already been joined by C, D, E, and F!
There was seemingly only a small period where this complete early alphabet was even possible, as the original ACA's and colourful 1984- ACC's were gone by 1986..

..and then too the swoopy ACE's, which through '85 look to have been available in a less-obnoxious mostly-white colourway (the ACE-W)..

So when we then take another largish step to early 1987...

...there's their later-'86 replacements, the ACG and ACH. André Courrèges charging well into the alphabet at this point, although it is getting a little patchy... 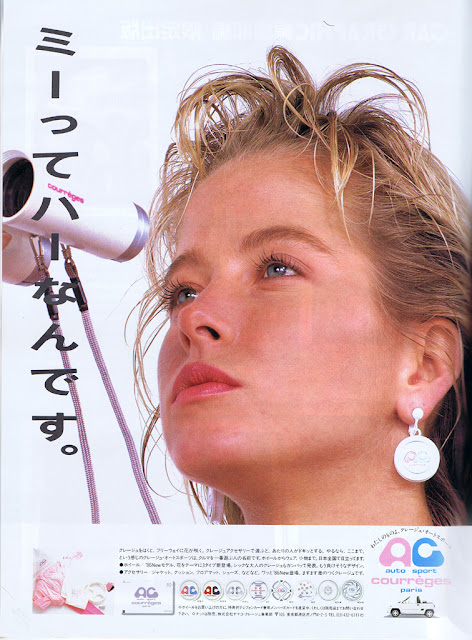 Ah, yes.. and the whole advert. Courrèges earrings, binoculars, and an ACD-clad City Cabriolet; the model looking dreamily into the distance, pondering other Courrèges products she could purchase in the future...

That'll do for now anyway. Well, until I bump into those other-other adverts again!