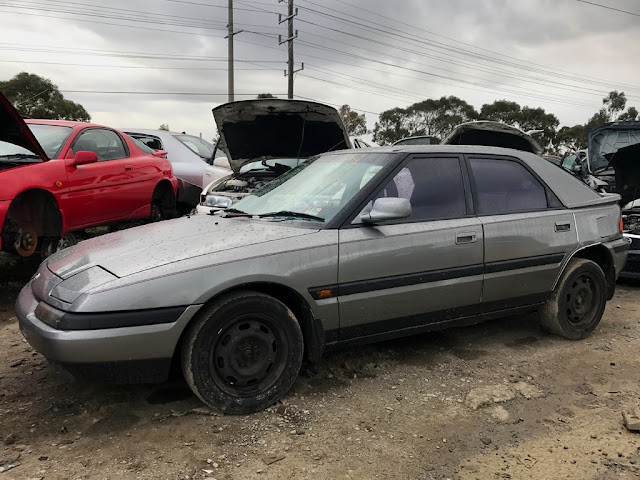 ..let's get some appreciation sent toward yet another quirky-but-otherwise-forgotten 'modern classic'.
From a wreckers run in recent months; Mazda's sixth-generation (BG, 1989-) Familia in what'd be its most stylish form - the "yeah, the pop-up headlight one.. the Carlo-Astina" Familia/323 Astina. 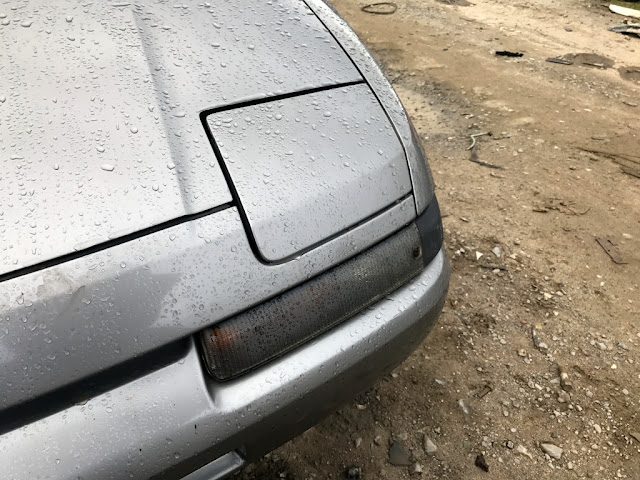 Uh? No, seriously, I've always referred to this variant of thrice-two-thrice (like this very late production - August 1993 - gunmetal-grey number..) to my car buddies with the name of the only person I'd ever known to own one. Hell, even with people who have absolutely no idea who I'm talking about. Weird, sure, but running jokes and so on. Can't stop now.. 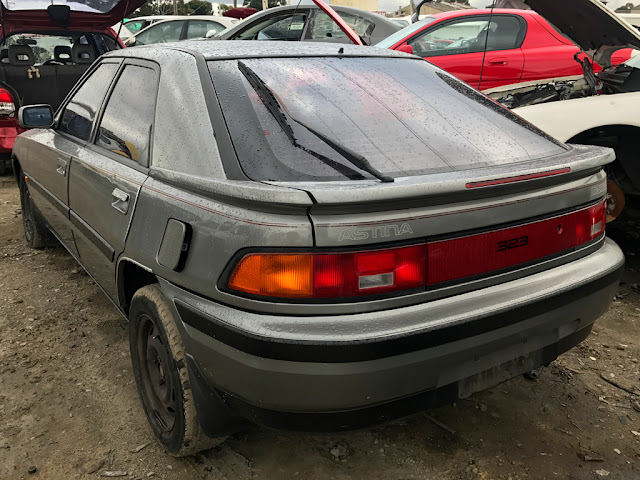 Despite the Astina's lack of a performance variant (a little cruel seeing the turbo+AWD drivetrains fitted to the shorter hatch!), it's hard not to appreciate the more unique/adventurous design here. The low bonnet-line, pop-up headlights, thick C-pillar, and that short rounded tail with wraparound three-piece spoiler and tail lamps - something different for the automotive landscape in '89..! 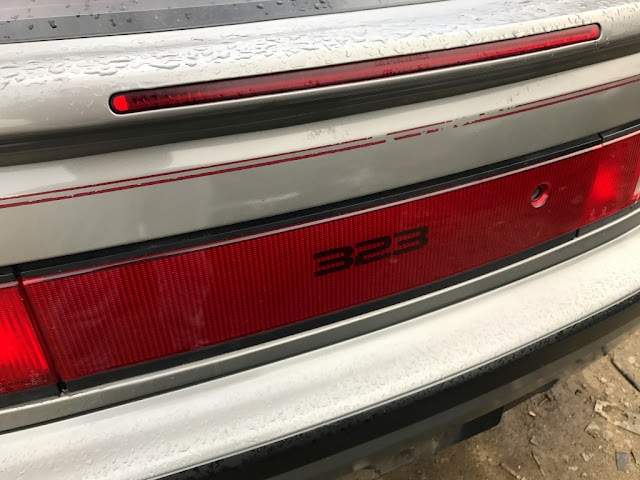 Urgh, I have a thing a full-width tail-lamp garnishes. I may have taken this one home with me.. 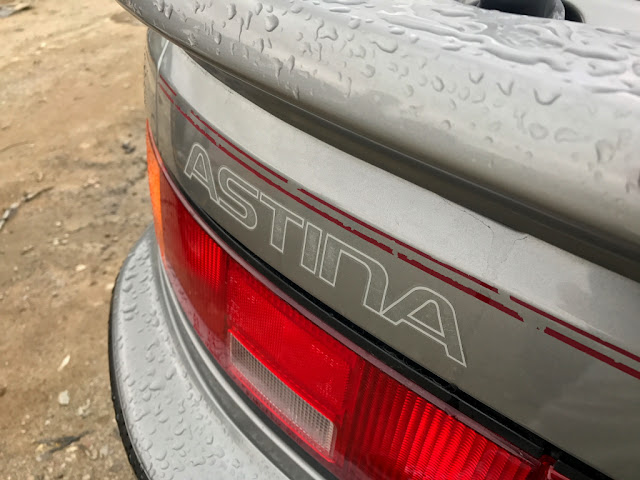 323F in Europe. Familia Astina in Japan. Australia? The 323 Astina - a name that continued onto 1993's next-generation replacement Mazda Lantis... 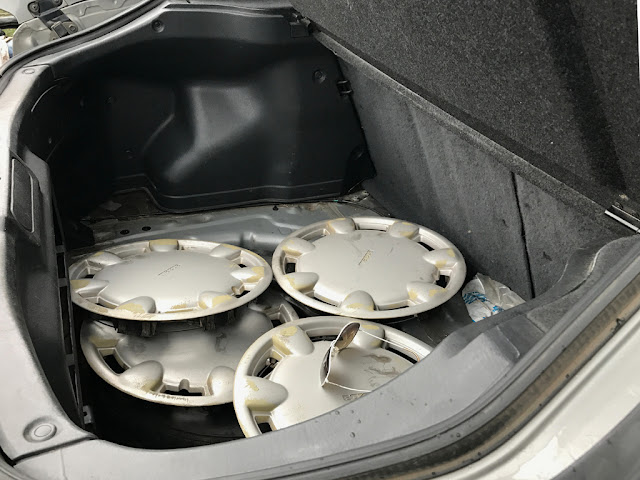 Open the hatch, and there's those missing hubcaps... 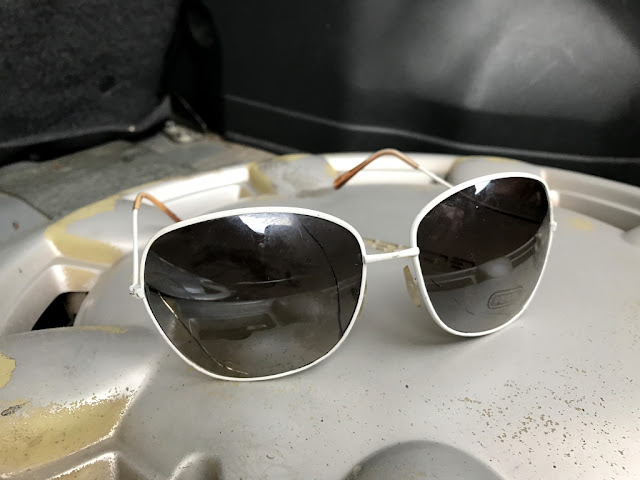 ...along with some sweet sunnies. Ah, the crap you see in cars at the wreckers.. 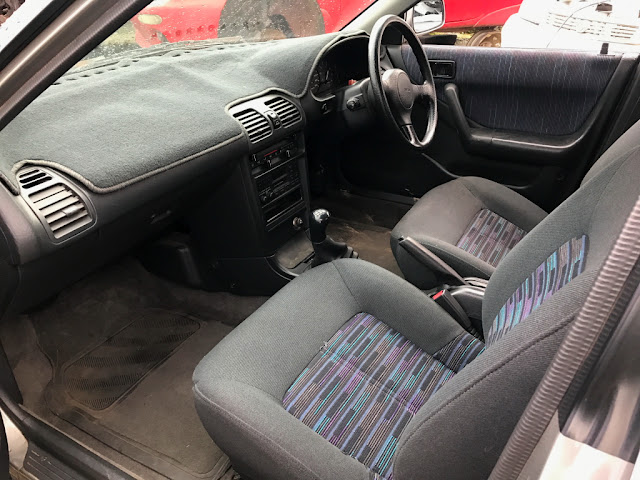 In saying that though, open the door on this particular car and I'm presented with a remarkably tidy interior! Not specifically wear-and-tear wise (which it has held up fantastically well - just look at those bolsters..) but the fact it looks as though it was damn-well vacuumed on its way into the yard!
Someone cared for this car, and that hurts.. 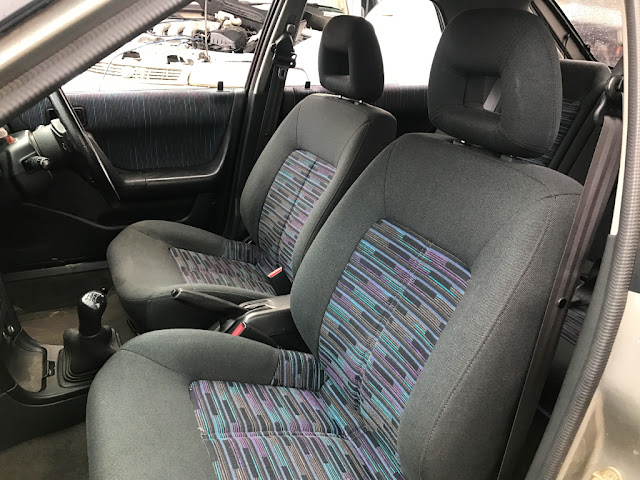 That fabric'll certainly take my mind of it though! That is nice.. 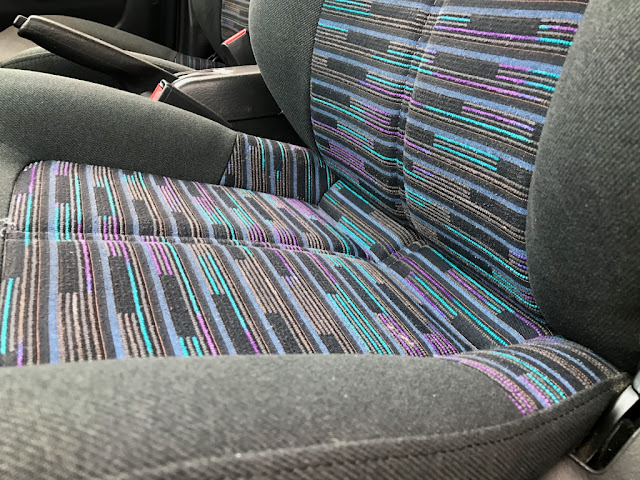 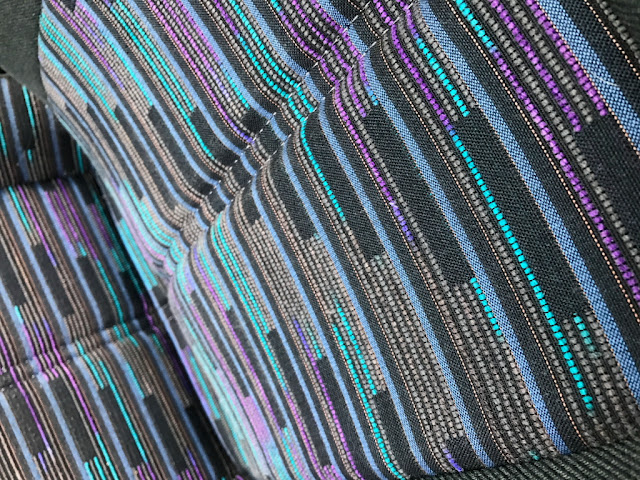 I really like that. Purple, teal, light blue and grey horizontal stripe - a good looking pattern.. 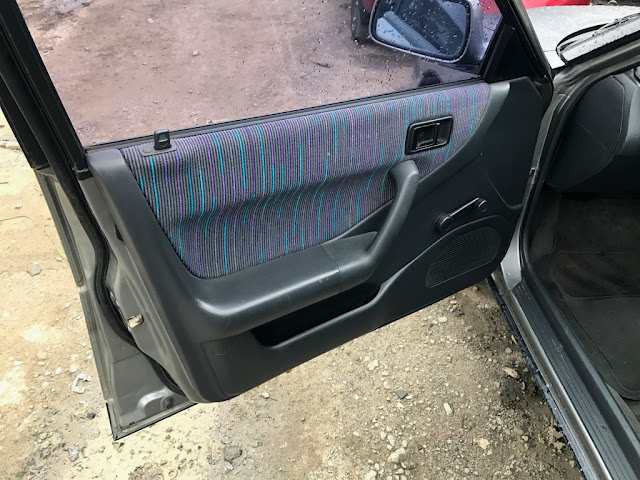 Vertical on those doorcards for a bit of contrast? 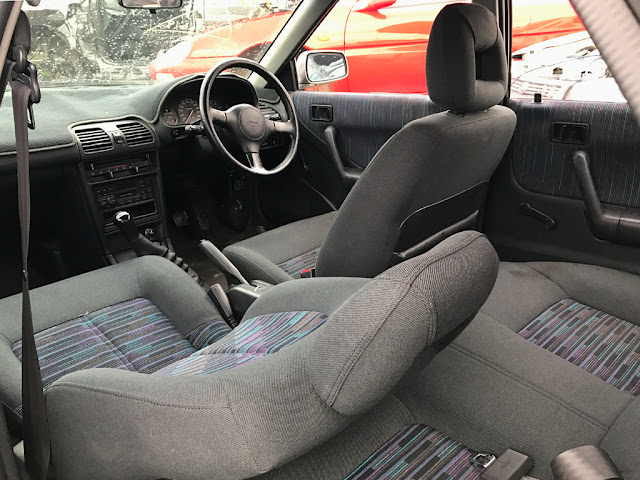 ...or because it's still then technically running perpendicular to the car, extending across the seats and up the doors..? 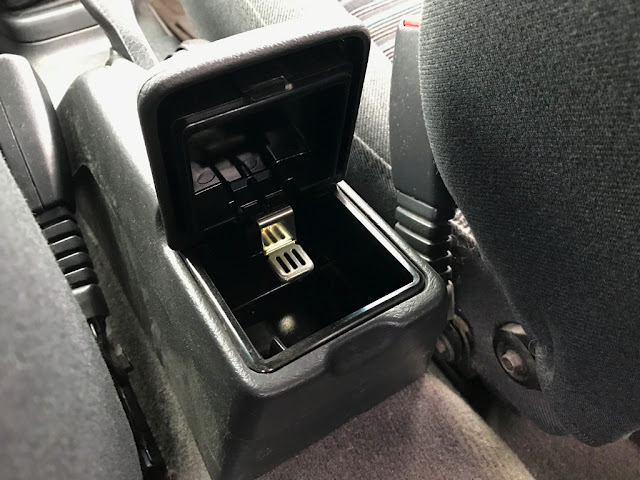 The cloth pattern's line between the front seats broken only by small console - an ashtray for the kids.. 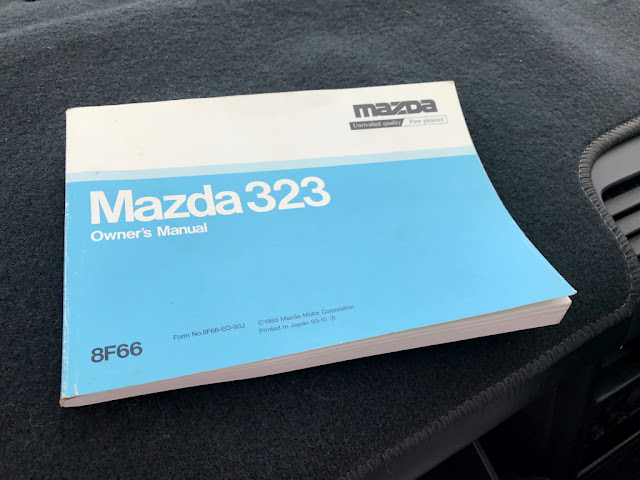 Back up front, the '93 323 owner's manual, and the (clean!) dash-mat that now pointlessly protects the dash-pad from the sun... 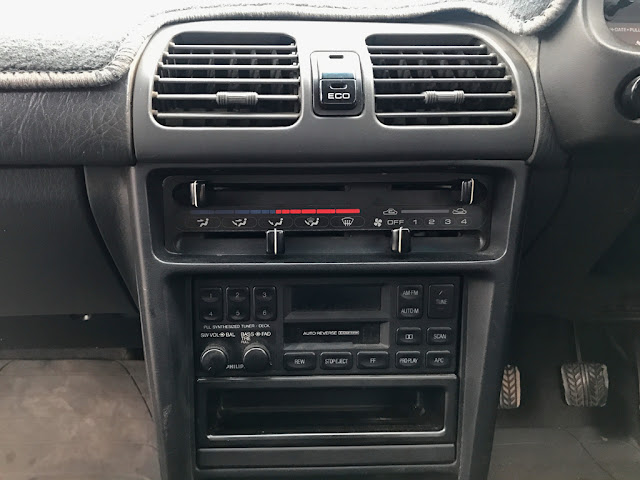 Large buttons and a basic layout for the original Philips cassette deck.. 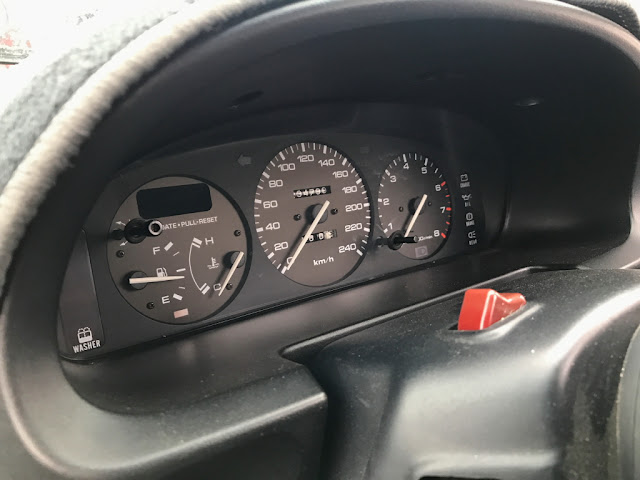 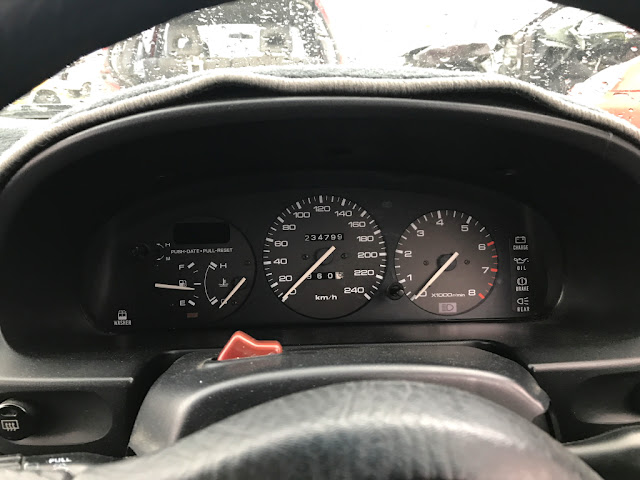 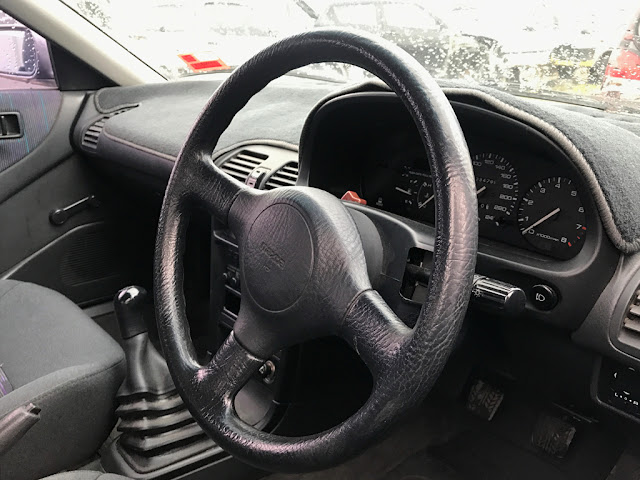 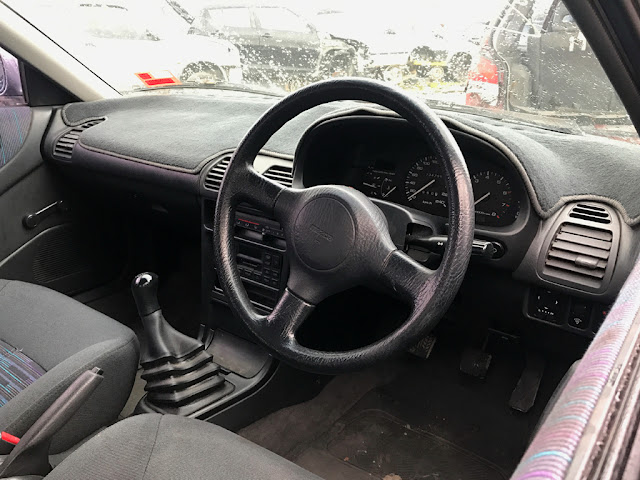 ...aaaand out the other side, with a look back across the little Mazda commuter's fairly-tidy-yet-wreckers-mint charcoal grey interior.

With that, we're done.
At 25years for the youngest examples next year; if nothing else, I'm always glad to get a proper look over an original whatever it happens to be, before they're all gone!